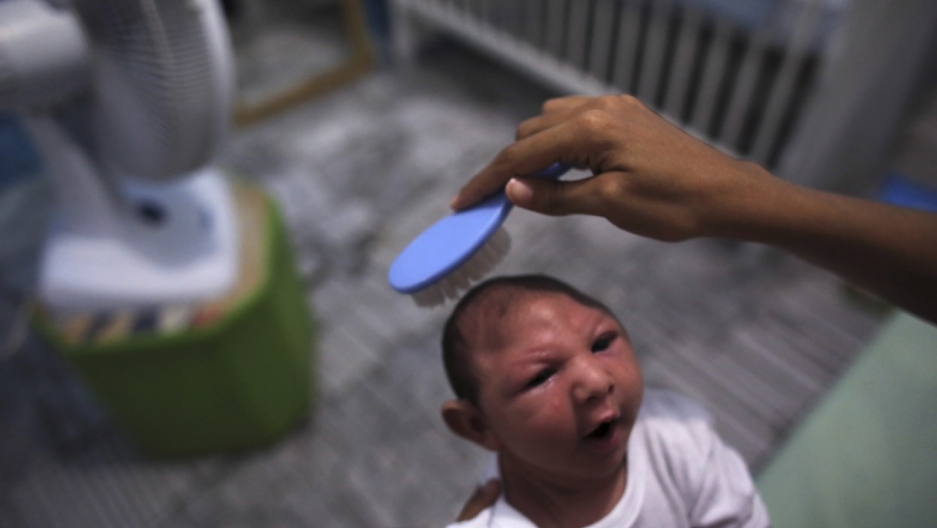 A mother brushes the hair of her 2-month-old son, who was born with microcephaly in Recife, Brazil.
Credit: Nacho Doce
Share

A study in Brazil’s northeastern state of Paraiba, published Feb. 4 on the World Health Organization (WHO) website, found there were far more newborns with abnormally small heads than previously reported, and many of the babies were born before Zika apparently reached this country in 2014.

The birth defect, called microcephaly, often also means the child's brain isn't developing properly. It has several known causes, but not until the current crisis was Zika thought to be one of them. The suspected link to Zika brought the WHO to declare a global health emergency.

In response to the crisis, Brazilian researchers examined data on 16,208 babies born in Paraiba since 2012. They found that 4 to 8 percent of the infants fit within the Brazilian government’s definition of microcephalic. That amounts to at least 648 babies born with smaller-than-normal heads since 2012 at the clinics they studied.

That’s extraordinary since Brazil's Health Ministry has consistently claimed only about 150 babies are usually born with microcephaly each year in all of Brazil — a country of 200 million people. The researchers looked at births in just 21 health centers, a subset in a relatively small state.

The government, WHO officials and media have seized upon the 150 number as a baseline from which microcephaly cases reportedly jumped at the end of last year. Independent experts told GlobalPost that seemed like a low number for Latin America’s largest nation. In the United States, 25,000 babies are diagnosed with microcephaly annually.

The new report also calls into question the link between microcephaly and Zika, which some experts claim is getting clearer and clearer.

The researchers in Paraiba found hundreds of cases of microcephaly in 2012, 2013 and 2014 that predate the suspected arrival of the Zika virus in Brazil during the 2014 soccer World Cup.

They concluded that Zika therefore should not be immediately blamed for causing microcephaly. Their report reads:

“Many other potential factors need to be considered as the cause of the outbreak. Among them figures the possibility of boosting effects from associated infections, perhaps even viral infections, such as DENV [dengue fever] and CHIKV [chikungunya virus], both carried by the same Aedes aegypti vector. Also to be considered is teratogens exposure, such as vaccines or drugs used in early pregnancy.”

Rather than tamping down concerns about Zika and birth defects, however, the doctors warn that the microcephaly crisis could actually be much larger than has been reported. The lack of good data makes it impossibly to quantify the size of the crisis, they concluded.

“We need to look at this data in more detail and we need to get more data before we draw conclusions so quickly,” said Dr. Sandra da Silva Mattos, one of the authors of the report.

This isn’t the first report to raise doubts about the figures being put out by Brazil’s Health Ministry.

Last month, the journal Nature published extracts from a report by the medical body responsible for monitoring birth defects in Latin America. It concluded that the apparent increase in babies with small heads “is probably due to active search and over-diagnosis.” This possible over-diagnosis is being spurred by intense media interest in the story, the report says, and the data so far collected is inconclusive on any connection between Zika and microcephaly.

Nevertheless, prenatal doctors in northeast Brazil's Pernambuco state, which borders Paraiba, said the number of microcephaly cases they have seen peaked late last year and have since dropped significantly. But experts worry they could spike again later this year.

Yet measuring the real scope of microcephaly here, and testing for a link to Zika, will continue to hit hurdles without good data.