Theodor Koch-Grünberg in the Amazon

"I met Ciro Guerra when he joined a theater group I was directing at the National University of Colombia — years ago. He was very young," explains anthropologist Ignacio Prieto. "From the day he began, Ciro was interested in directing."

Today, Guerra is the director of Colombia's first-ever Oscar nominated film — Embrace of the Serpent — and he has Prieto to thank.

"It all started with a beautiful photo I came across. It's of an explorer, and he's sitting on a little bench in Colombia's Amazon. His clothing is worn. His hat is torn. He's barefoot. An indigenous boy rests a hand on his shoulder," explains Prieto. "This image fascinated me."

Prieto's curiosity consumed him, and he embarked on making a documentary about the man in the photo, who he identified as ethnologist Theodor Koch-Grünberg, the first documented overseas explorer of the Colombian Amazon. The German scientist traveled around the Vaupes region from 1903 to 1905, studying its people, its cultures and its mystical plants.

"In this moment, it is not possible for me to know, dear reader, if the infinite jungle has started on me the process that has taken many others that have ventured into these lands, to complete and irremediable insanity.

If this is the case, I can only apologize and ask for your understanding, for the display I witnessed in those enchanted hours was such, that I find it impossible to describe in a language that allows others to understand its beauty and splendor; all I know is that, like all those who have shed the thick veil that blinded them, when I came back to my senses, I had become another man.” — Theodor Koch-Grünberg, 1907

Prieto pored over the late explorer's diaries and discovered an empathetic man who appears to have treated the indigenous communities he encountered as equals, something Prieto says is still not all that common.

"The treatment of indigenous people is traditionally as inferiors, and it's rare for them to get to play the protagonist of a film," says Prieto.

Embrace of the Serpent bucks these trends.

When Prieto's documentary plans fell through due to scheduling conflicts, he passed on his research to a trusted friend, Guerro.

Over the next three years, the two men followed Koch-Grünberg's footsteps up and down the Amazon's twisting banks, visiting sacred grounds, meeting with elders and taking part in sacred rituals led by shamen. All in the name of research.

Once Guerra began reading the explorers' diaries in earnest, he was hooked on the project.

"As I started delving deeper into the diaries, I just thought that it was a fascinating story and I couldn't believe that it hadn't been told," notes Guerra. "It was a story about knowledge, a story about people from different sides of the river and of the world looking at each other and trying to bring this knowledge together, at the same time that it was being destroyed."

The goal was to make a film about the Amazon through the authentic voice of its people, rather than the more familiar trope of stranger-looking-in, and working with indigenous communities was Guerra's favorite part of the film-making experience.

"These people are very open, very joyful, and they are willing to share so much," he says. "We're talking about people who don't handle money for most of their lives. And everywhere you go in the deep Amazon, there will always be a plate of food and a smile for you, no matter who you are or where you're coming from."

It took all three years of pre-production for locals to gradually translate Guerra's script into their own languages. The Colombian filmmaker says it was a process that essentially rewrote his storyline, infusing the production with Amazonian myth and spirituality.

"That's how a very western script became a very Amazonian film," he says. 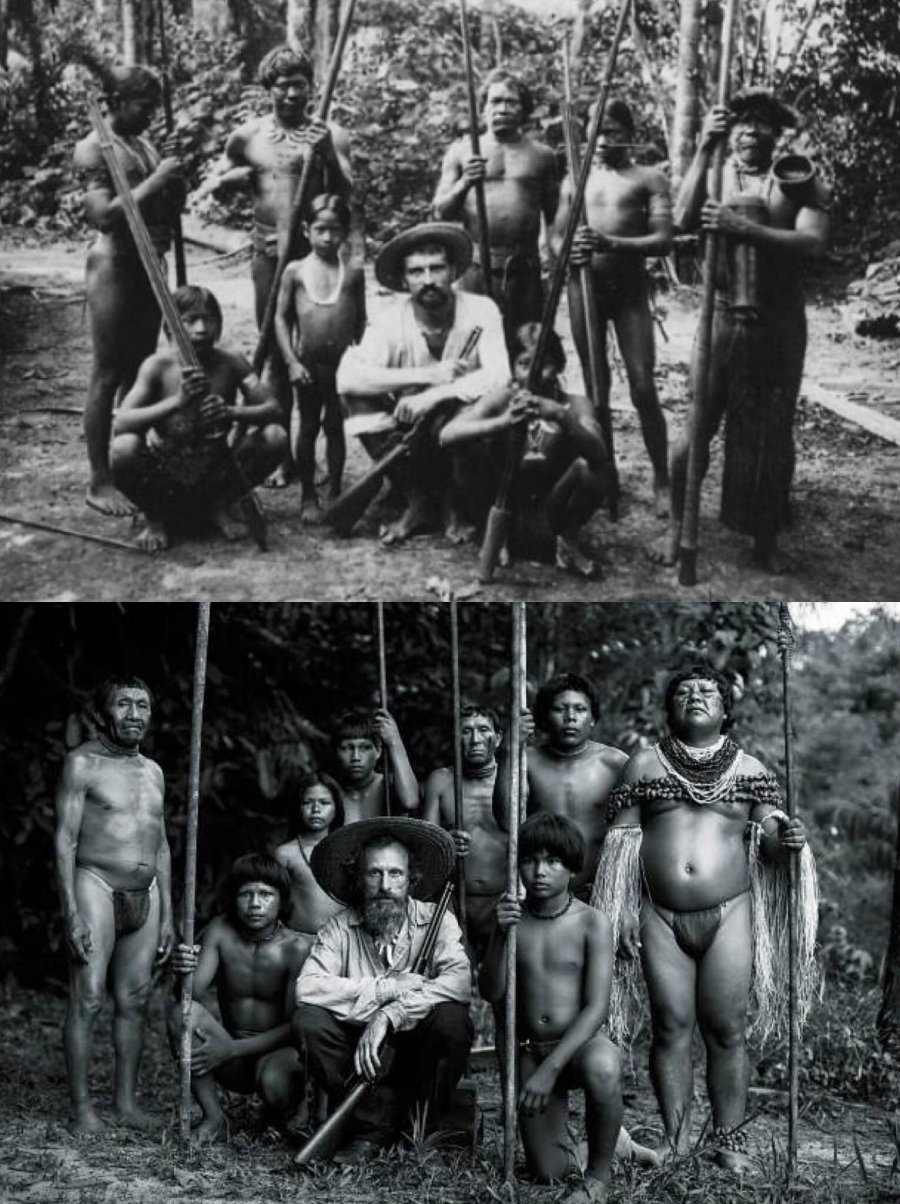 Embrace of the Serpent premiered in 2015. It's the story of Karamakate, the last living member of his tribe and the two journeys he takes with foreign explorers, 40 years apart. It's nomination for Best Foregin Picture at the 2016 Academy Awards makes it the first Colombian film to be nominated for an Oscar.

The character of Karamakate is played by two indigenous actors, Nilvio Torres of the Cubeo tribe and  Antonio Bolívar of the Ocaina. And one of Serpent explorers, 'Teodor von Martius,' (Jan Bijvoet) is based on the German ethnologist captured in that old photograph, who was transformed by the Amazon so many years ago, Theodor Koch-Grünberg.