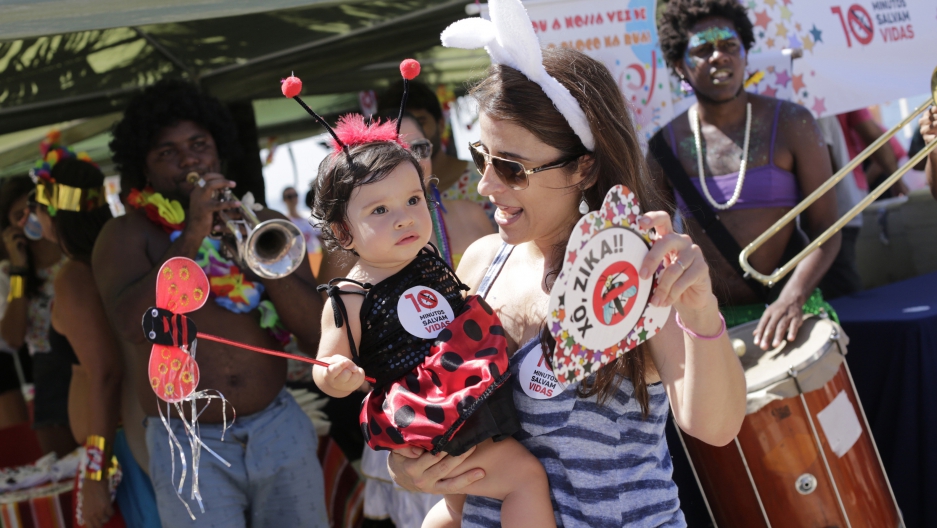 A woman and child in costume dance during a street carnival at which health workers distributed kits with information about the Zika virus, on Ipanema beach in Rio de Janeiro, Brazil.

For the first 27 years he was in practice, most patients were thrilled to visit Dr. Pedro Pires’s ultrasound clinic, where he and his magic machine would give them a first, grainy glimpse at their baby.

“Now they come in as though they were sentenced,” he says. “They are so afraid of what they might see on the screen.”

The outbreak of the mosquito-borne Zika virus and the mounting indications that it may cause birth defects is changing the experience of pregnancy for many women in Brazil, lacing what might otherwise be an exciting life event with anxiety — and bug spray. 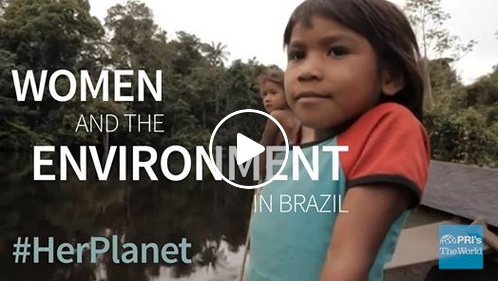 Both have crept into this year’s celebrations of Brazil’s most iconic holiday, Carnival, here in Recife, home to some of the largest and most traditional celebrations in the country. Since August 2015, this region in northwest Brazil has been contending with a surge of babies born with microcephaly, a condition in which a child’s brain development pauses mid-pregnancy, resulting in smaller than average heads and lifelong developmental delays. Researchers believe the defect may be caused by Zika.

With no end to the outbreak in sight, Zika has become a part of the five-day celebrations. Mosquito costumes have featured heavily in parades across the country. Health officials handed out paper fans with information about how to avoid the virus. And some pregnant women did what was once unthinkable in a nation known for its celebratory spirit — they stayed home.

Amanda Borba, seven months pregnant with her first child, is among them.

“All my friends went to the beach for Carnival. But they will be staying close to a mangrove swamp, and there will be mosquitos there, so I decided not to go,” she said.

It’s not just Carnival that’s changed for Borba. Now, she rarely leaves the house during the day, since that’s when the mosquitos believed to carry Zika are most active. When she does, she swathes herself in long-sleeved shirts, pants and tennis shoes, even in the humid equatorial heat. She has just moved into a new apartment: Her first planned purchase is an air conditioner, so she can close the windows and lock the mosquitos out. In the meantime, she applies repellent several times a day.

“My high-income patients are actually moving to the United States or Europe for the first months of pregnancy,” said Pires. “I have three patients in Florida right now.”

Camila Clarissa Chagas, 27, can’t afford to leave Brazil. In October, when she heard of the virus’s possible connection with microcephaly, she was terrified: She had come down with Zika just three months before getting pregnant.

Chagas began consuming as much information as she could about the outbreak, scrambling to figure out if pre-pregnancy Zika could lead to microcephaly. But definitive information has been sparse, so she paid for a series of ultrasounds at private clinics to check on the baby.

She, too, planned to spend the Carnival holidays at home for the first time.

“First, because I’m seven months pregnant and I’m tired. Second, because I’m scared of other terrible viruses coming here with all the tourists, and catching those too,” she said.

Some women have decided otherwise. Flavia Nicacio, 32 and pregnant with her second child, attended Carnival in Recife Antigo on Sunday. “This is the only day I’m coming out. I’m taking precautions — I’m wearing all these clothes,” she said, looking down at her pants and shawl as she stood in the late afternoon sun.

Julia Silva, a 26-year-old who is seven months pregnant, took the opposite approach: Short-shorts and a halter top, her bare-skinned belly preceding her as she walked toward the festivities. “Sometimes I wear repellent. Not always. Not today,” she said. “I’m not worried. First they say one thing, then they say another. Who knows what’s really happening anyway.”

Another pregnant woman at Carnival declined to give her name for an interview: “I can’t give you my name! I’m a doctor and I told all my patients to stay home, so I am setting a terrible example.”

The government has not explicitly told pregnant women to stay away from the festivities, but it has been blitzing Brazilians with fliers, billboards and advertisements about precautions they should take. And after scientists found the Zika virus in the saliva of two patients last week, health officials warned pregnant women to be careful about partaking in a common and popular part of Carnival celebrations: kissing. Revelations that the disease can be sexually transmitted have also inspired warnings for men to use condoms with their pregnant partners.

Cynthia Monalisa Nascimento decided to skip most of the festivities this year, although she says that has more to do with being nine months pregnant than it does with Zika. Instead, she will spend most of her time relaxing at home — where she and her family have become exceedingly careful about removing water from underneath potted plants and the air conditioning unit, since mosquitos breed in standing water.

“[Microcephaly] became her greatest fear,” said her husband Raphael Carvalho. “One day we went to the public health clinic for a mandatory vaccination. Along the way we passed a mother with a baby with microcephaly. It was a very shocking vision for Cynthia — she started trembling and crying.”

Carol Rattasco, 30, is 14 weeks pregnant — “13 weeks and six days,” corrects her husband Thiago Felipe Porto, 31 — around the point of pregnancy that researchers think may be the most dangerous for babies whose mothers contract Zika. She no longer goes to outdoor parties, and she’s stopped walking her French bulldog Charlie along the river as she used to, fearing mosquitos.

They had planned to wait until next year to try for a baby and had discussed delaying even longer if the region’s microcephaly epidemic doesn’t die down by then. But the contraception they were using failed.

The most prevalent feeling they had upon learning Rattasco was pregnant?

This story comes to us from our partners at FRONTLINE.