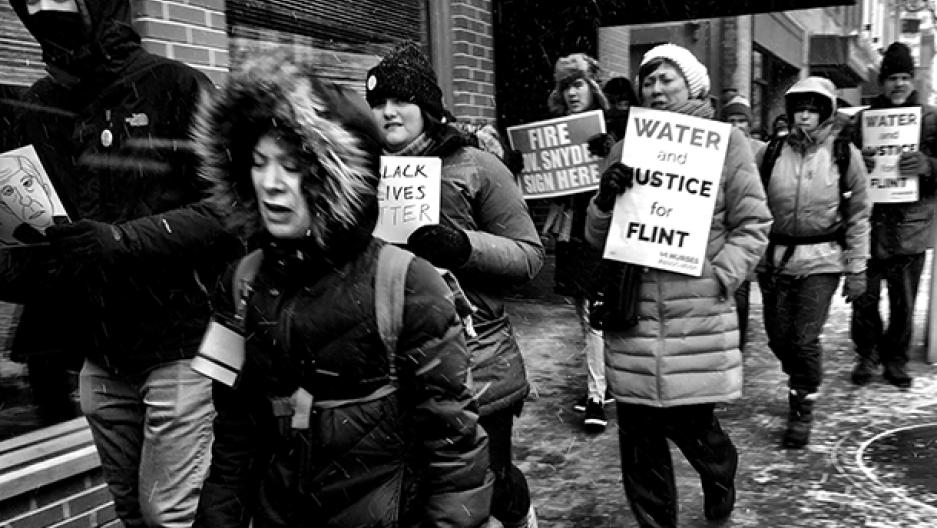 Protesters in Ann Arbor, Michigan called for the arrest of Governor Rick Snyder over his handling of the drinking water crisis in Flint, Michigan.

The drinking-water disaster in Flint, Michigan, occurred not just as a result of mistakes and bad decision-making — it was the result of lies, falsified science and a deliberate coverup.

“What's happened is an entirely preventable man-made disaster that started out by not following federal law that requires addition of a corrosion control chemical to the water supply to protect the iron and lead pipes from corrosion,” says Virginia Tech water treatment and corrosion expert Marc Edwards.

Lead, a powerful neurotoxin, began leaching into the municipal water supply of Flint Michigan in April 2014, when the city switched its water supply from the Detroit water it had been using for decades to Flint River water, which runs through the town. This water is saltier and a little more corrosive, Edwards explains. And once it was put into the system, a “perfect storm of corrosion was unleashed.”

“Red water — iron rust falling off of pipes — was coming out of people’s taps at very, very high levels. Lead was leaching into the water supply from the earliest days and pipes were breaking, literally in the streets, due to the high corrosion,” Edwards says.

Residents complained that their tap water suddenly smelled and looked bad, but local officials insisted it was safe. General Motors, which has a plant in Flint, noticed that the water was corroding car parts and stopped buying Flint water. Still, the state continued to claim there was nothing wrong with the water.

Even when local officials started detecting high lead levels in the water, rather than admit that they were breaking the law — which they and the EPA regional office knew as far back as April of 2015 — they didn't tell anyone.

“Outside people were figuring out these problems, while the very agencies that we pay to protect us from lead in water were lying to each other in writing,” Edwards says. “They were telling the public that the water was completely safe. If anyone said anything to the contrary, as we did when we started working with the residents, we were attacked. In fact, had outside people not gotten involved and exposed this, Flint kids would be drinking that water to this day.”

When Edwards arrived in Flint, after being contacted by LeeAnne Walters — the ‘hero Mom’ of this story — he helped sample the water supply and found the worst lead levels in water he had seen in 25 years in the field.

Even after flushing her pipes for 20 minutes to try to clean out the pipes, the lead levels remained in the thousands of parts per billion.

“Lead is the best-known neurotoxin. It adversely affects every system in human body,” Edwards says. “For that reason, we pay people, and pay them well, to protect us from this hazard, so that a situation like Flint would never happen — and unfortunately they failed miserably at doing their job.”

Ironically, the EPA could have been the hero of this story, Edwards said. An EPA worker named Miguel Del Toral had reached out to LeeAnne Walters and was the first one to work with her and to figure out that something was amiss in Flint, Edwards explained.

Del Toral wrote a damning report: It said that Flint was not following federal corrosion control laws, that one child had already been poisoned and that the entire city was in imminent peril. Del Toral leaked his report to the press. But instead of taking it seriously, Edward says, “the Michigan State Department of Environmental Quality and, even worse, his boss — a political appointee — buried the report, told Del Toral he could not talk to anyone about the Flint situation and actually went on a campaign to discredit him.”

“What's happened here is a complete failure of our government,” Edwards says. “In this case, the EPA could have and should have been the heroes. Their employee did this amazing thing to protect the population, even put his job on the line to do so, and his boss ... covered this up and sat silently by for about eight or nine months while the city was on the verge of civil unrest.”

Edwards, unfortunately, has seen this happen before. In Washington, DC, from 2001 to 2004, EPA changed the disinfectants in the city’s water supply. They were trying to do something good, Edwards says, but the unintended result was a massive lead contamination event — the worst in modern US history.

Emails uncovered as result of an investigation showed that EPA knew about the contamination and hid it from the public for three years, until the Washington Post uncovered the story.

Ten years later, officials now know that thousands of children were lead poisoned and there was a higher incidence of miscarriages and fetal death, which is an expected impact of lead in water exposure, Edwards says.

“Unfortunately,” Edwards says, “the US Centers for Disease Control and EPA colluded to completely cover this problem up. They wrote a report at the height of the media outcry that said not a single man, woman or child had blood lead elevated over the level of concern and that this was all much ado about nothing.”

That false statement stood for five years until Edwards wrote a paper in 2009, which was followed by a Congressional hearing that “just reamed the CDC for their indefensible scientific reporting,” Edwards says.