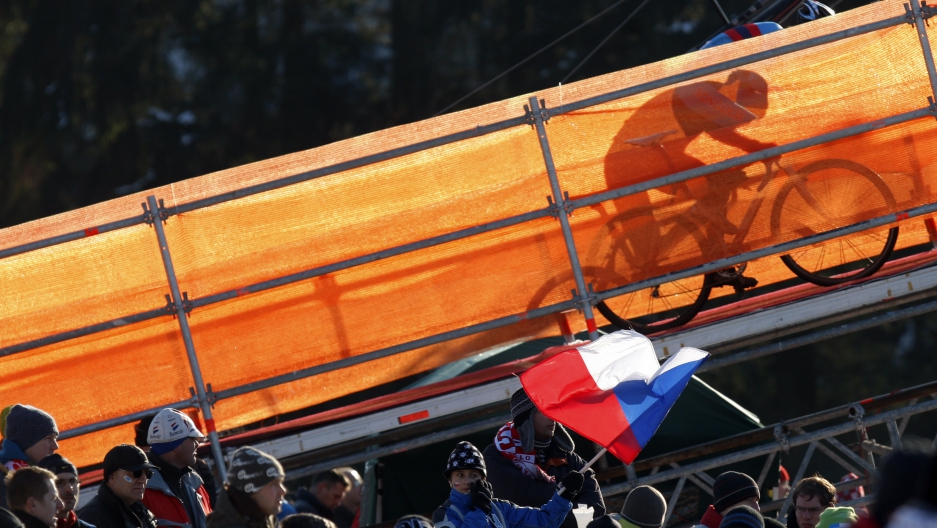 An unidentified athlete competes during the men's event at the 2010 UCI Cyclo-Cross World Championships in Tabor, January 31, 2010.

I couldn't believe it when I heard about the latest cheating scandal in cycling.

Forget about athletes doping their bodies.

They're doping the bikes themselves!

The "International Cycling Union" — or UCI — found a MOTOR inside a competitor's bike. This happened in a Cyclocross race in Belgium.

It's a tough sport — with bikes built to race down dirt roads, mud, sand, and snow — as well as pavement.

I long suspected cyclists were doing the whole "motor in your bike" thing. If you’re a fan of cycling, you just need to accept people cheat. And this is a great way to cheat. You don’t need to take drugs. The bike is the drug. And there are plenty of people like me.

“I’m not surprised someone put a motor in a bicycle,” says David Schloss, an editor at Bikehugger. “But I’m pretty saddened. I think that any doping really defeats the point of the competition. This just takes it to a whole new level.”

The UCI had been mocked for brining airport style X-ray machines to races to look for motors. They did this primarily in big money road racing events, not just cyclocross. But bike-doping rumors have been going on for years.

“The suspicions had been officially going on since 2010,” he says. “Comments about it being a possibility started a year or two before that.”

Schloss says the UCI has been trying to catch someone using a doped bike ever since the organization proved it was possible to hide one inside a bike. Honestly, it’s pretty easy. Schloss says the minimum weight for competitive bikes is about 15 pounds. Technological advancements have made it possible to build bikes much lighter. So light that adding a battery-powered motor to a bike would not be a problem. You could still keep it at the minimum weight.

These motors aren’t all that powerful compared to motorcycle engines. They just give an extra boost. But that’s all you really need in a bike race.

“The difference between being a first-place finisher and being somewhere off the Top 10 might be the difference of two or three seconds,” he says. “So really, all you need is that little boost. And this gives you that advantage as unfair as it might be.”

We all have our moments when our perceptions are tweaked. But I saw something suspicious at a local amateur cyclocross race. It’s an acceleration that looks too easy. It’s one that blows past the very best racers. For Schloss, it was slightly different.

“My suspicions were tweaked the first moment when spectators and magazines and the TV shows all said that it wasn’t possible at all,” he says. “Because they all said the same thing about every type of biological doping.”

The problem for cycling is that not all its fans are like me, and are just resigned that doping is a part of the sport but will continue to watch it and cheer on its racers. I haven’t given up on cycling. I think they do their best to try and stop doping. But the incentives to dope are too strong.

Yet this has turned some people, like Schloss, away from the sport.

“I have a 5-year-old son. And his first two-years of life we watched the Tour de France together. But the last couple of years I really stopped showing it to him. I couldn’t really justify showing him a sport in which I was so sure that there was so much doping going on,” he says.

“These people are clearly in it to make their income and make their living. But what they are doing is they are taking the enjoyment away from all the spectators.”

What's next? No Santa Claus?