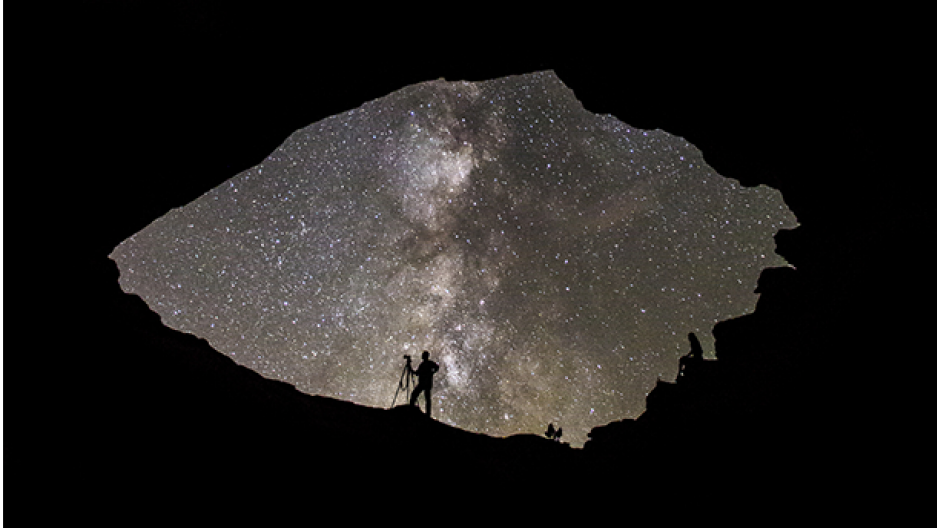 The view of the cosmos through the South Window at Arches National Park.

Throughout history, humans have gathered in the dark to marvel at the starry blanket overhead. Nowadays, artificial light pollution obscures the night sky in much of the industrial world — which could lead to unforeseen consequences for the environment and for human health.

Since the invention of electric light in the 19th century, the night has been getting progressively brighter, but things really took off in the 1990s. “It's about ten-times as bright as it was just 20 years ago,” says Paul Bogard, author of the book "The End of Night."

The acceleration has to do with population growth, an increase in nighttime labor, and the widespread belief that more light makes cities safer. Paul Bogard says that light does increase safety, but only up to a point. Too much light at night can actually make cities more dangerous.

“There's so much light in our nights and its glaring lights that make it hard for us to see,” he says. “Too much light tends to create the illusion of safety; we think we can be reckless purely because it's light out, and that's obviously not the case.”

With over-lit gas stations and bright LED streetlights shining skyward, a clear night sky is harder and harder to find. And our eyes, which developed the ability to see in low-light settings, rarely have the occasion to use that skill anymore.

“40 percent of Americans and Western Europeans never or rarely experience night vision,” says Bogard. “We're in the light so much that our eyes never switch.” Even inside it’s hard to avoid the glow of streetlights, and we often glance at brightly lit cellphone screens right up until we fall asleep.

There’s a growing medical consensus that all this artificial light is bad for our health. It interrupts our sleep patterns, confuses our circadian rhythms and inhibits our ability to produce melatonin. “Melatonin is only produced in the dark,” says Bogard, “and what scientists are finding is that a lack of melatonin in our bloodstream is linked to an increased risk for breast and prostate cancer.”

Doctors are not saying that the light in your cellphone will give you cancer, but increasingly they recognize the importance of darkness to our overall wellbeing. “We've evolved in bright days and dark nights, just like all life on Earth,” Bogard says, “and we need both for optimal health.”

Wildlife also depends on darkness. Sea turtles, for example, need a dark sky to navigate. When hatchlings climb out of their nest on the beach, they need to crawl their way to the sea. “They've evolved to swim or scurry to the brightest light on the horizon,” says Bogard, “which for all those hundreds of millions of years has been the stars and the moon reflected on the water, but now it's the hotels and parking lots in the wrong direction.”

Concerned about the impacts of light pollution, a growing movement of people are working to reduce excess lighting in our cities and protect dark skies. This is playing out in the National Park Service, which has created the Natural Sounds and Night Skies Division. “They measure how dark the skies are in parks,” says Nate Ament, who works for the National Parks in Moab, Utah. “I think they’ve taken measurements in over 400 locations. So we have this really rich dataset of darkness all over the entire country.”

One metric for darkness is the Bortle Scale, and it rates the sky from 1 to 9. Las Vegas or Times Square would clock in at a 9. Humans have lit up so much of the world that it’s almost impossible to find a Bortle Class 1 anymore, but some of the darkest skies in the country are in the four corners region, where Utah, Colorado, Arizona and New Mexico meet on the Colorado plateau.

Canyonlands National Park, just down the road from Moab, has been measured at a Bortle Class 2 and was recently named an International Dark Skies Park — the seventh on the Colorado Plateau. “That’s by far the highest concentration of these parks in the entire world,” says Ament, “there’s only 28 worldwide.”

With so much federally protected land on the plateau, Nate wants to preserve a really large swath of darkness right in the heart of the West. He works with towns like Moab to cut unnecessary lighting and introduce technologies like light shields that reduce sky glow.

Smart lighting is an easy sell when you explain how much money it can save. One town that’s been particularly forward thinking is Flagstaff, Arizona. “There’s one study that estimates if the entire state of Arizona were to take up Flagstaff’s lighting practices, it could save the state $30 million a year,” says Ament. “That gets people attention.”

For years, the National Park Service has worked to protect some the most beautiful views in the country — Sentinel Dome at Yosemite, the old faithful geyser at Yellowstone, the Grand Canyon. Ament’s job is to protect the increasingly rare view of a clear night sky. He says that if we want our children to see the stars, we’re going to have to turn some lights off.