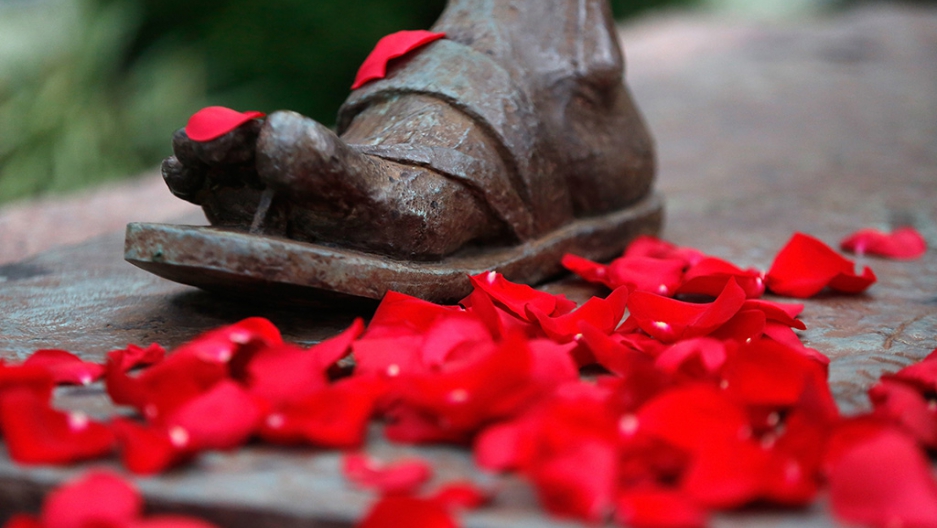 Flower petals lay scattered at the feet of the Mahatma Gandhi Statue at the Indian Embassy in Washington, Sept. 30, 2014.
Credit: Jonathan Ernst
Share

NEW DELHI, India — Mohandas Karamchand Gandhi is considered the father of the Indian nation, instrumental in its independence from British colonialism and subsequent non-violent movements across the world. Sixty-eight years ago on Jan. 30, he was assassinated by Nathuram Godse, a Hindu nationalist.

Every year, the day is celebrated as Martyr's Day, to remember Gandhi and other Indians who sacrificed their lives for the nation. On Saturday, Indian Prime Minister Narendra Modi, President Pranab Mukherjee and leaders from across the political spectrum paid tribute at Gandhi's memorial at Raj Ghat, Delhi. This commemoration is far from the only tribute to Gandhi's legacy; his birthday is celebrated as a national holiday, and his ideals of non-violence, self-dependence and even cleanliness influence school texts, government initiatives and political discourse till today.

Though Gandhi is still fondly remembered as Mahatma ("great soul") and Bapu ("father"), it stands out that one young man loathed him enough to shoot the 78-year-old down in cold blood. Godse, who also worked as a journalist, defended himself during his trial, alleging that Gandhi’s influence over politics was too strong to allow the government to pass progressive legislation and unfairly favorable to Muslims. Modi’s Bhartiya Janata Party’s Hindu nationalist parent organization was banned that year for alleged links to Godse, which were later disproved.

However, support for Godse’s ideas and the opposition to Gandhi persists in India and around the world. The Akhil Bharat Hindu Mahasabha, a Hindu nationalist organization, is a strong supporter of Nathuram Godse, who himself was a member of the Mahasabha.

Efforts have been made, and repeatedly thwarted, to erect temples dedicated to Godse, who the Mahasabha describes as a misunderstood man, unfairly condemned by history for carrying out a task that it says was essential for the survival of the nation.

“If a man who ran a paper, who believed in the power of the pen was forced to take up a gun, there must have been a valid reason for it,” said Chander Prakash Kaushik, the National Convenor of the Mahasabha and the head of its Delhi branch.

Kaushik said that the reasons Godse carried out the assassination were suppressed by the long-standing Congress government, which, according to him, instead brainwashed the nation into idolizing Gandhi.

There are also pockets of international opposition to the commemoration of Gandhi. According to these opponents, a man who has been accused of racism, sexism, communalism and even sexual deviation should not be put on a plinth.

Last year, a group in South Africa threw white paint on a Gandhi statue in Johannesburg. The group, like some others, accused Gandhi of racism and supporting racial segregation.

The UK Sikh Federation, a Khalistani religious organization for expats practicing Sikhism, issued a strongly-worded opposition statement against the Gandhi statue unveiled in Parliament Square in London last March. In it, they questioned Gandhi’s sexual experiments and accused him of being a racist, alleging that its installation was a maneuver for political appeasement after a major arms deal was signed with India.

“Gandhi's disgraceful treatment of women is a darker and lesser-known side of his story,” historian Kusoom Vadgama said in an online petition she launched against the Parliament Square statue. Gandhi has been accused of sexual abuse of his grandnieces and psychological abuse of his wife. “That disgrace still continues today: his legacy is a culture that (like him) fails to empathize with the victims of sexual abuse.”

In the US, the Organization for Minorities of India (OFMI) has kept up opposition to Gandhi ever since its establishment in 2006. The group has a seven-point list of reasons why it says Gandhi was flawed, including his alleged support for Hitler, racial segregation in South Africa and the caste system in India.

The OFMI also alleges that Gandhi attempted to bribe a Californian woman to “conceal his involvement” in the murder of her husband. “An American citizen was brutally murdered by Gandhians in British India, torn limb from limb. We have a sworn affidavit where his wife states that Gandhi met her to discourage her speaking about the murder of his husband, which would hurt his cause,” said Pieter Friedrich, who in an advising director at the OFMI.

The group demanded that San Francisco’s Ferry Building Management take away the iconic statue behind the building, and it has also petitioned the White House to reassess Gandhi. Through letters to city officials and protests, the OFMI has attempted to block the installation of, or remove, Gandhi statues across the East Coast.

“Without Gandhi, maybe the problem of Kashmir would also not exist,” said Kaushik. He does believe that the popular perception of Gandhi is changing across the nation though. “The population has awakened now. A hundred percent of the youth between 18 and 40, who have made Mr. Modi the prime minister, would support Godse now, not Gandhi.”

Given Gandhi’s continued popularity, however, his claims remain dubious.