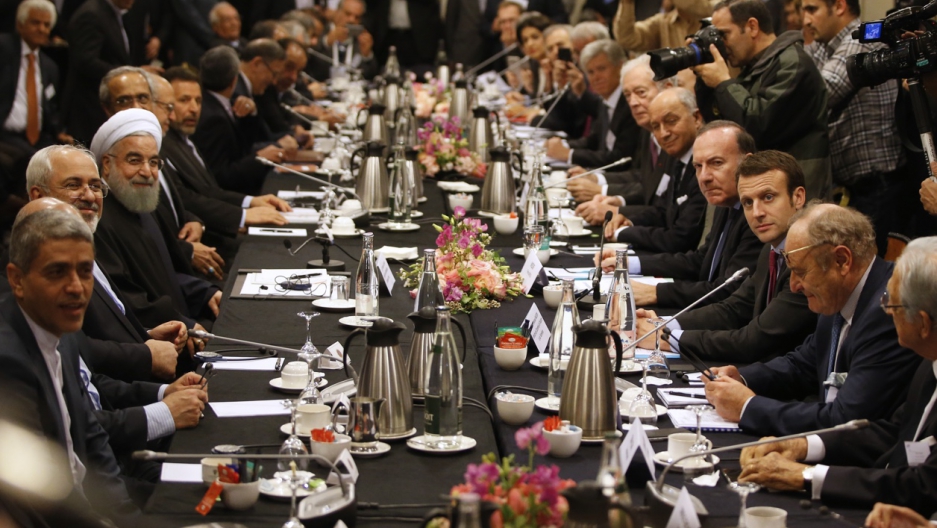 Iran's President Hassan Rouhani attends a meeting with French business leaders and politicians at a hotel in Paris, France on Jan. 27, 2016.
Share

Iranian President Hassan Rouhani arrived in France yesterday. He’ll leave today. In just 24 hours, he will likely sign deals worth billions of dollars. Rouhani’s trip to France is the first by an Iranian president in 17 years.

The leader's trip to France and Italy before it — and all the frenetic economic activity surrounding it — represents Iran’s reintroduction to the world after years of brutal economic sanctions and diplomatic isolation. After the signing of the Iran nuclear deal in July, governments and businesses all over the world immediately began to court Iranian trade. At this point, the moderate Rouhani is essentially just touring around, picking up checks.

His trade mission, however, is not without controversy. Italian officials made the decision to cover up nude artistic statues in Rome in deference to Rouhani. It was a move that revealed just how little many in Europe understand Iran and its people at this point. The officials apparently thought that because Rouhani was Muslim, he’d be offended by the nude art. Italians condemned the move as “cultural submission.” Iranians themselves mocked the decision on social media.

The truth is that Rouhani did not request that the statues be covered up and it is very unlikely that he would have been offended. The Iranian president responded to the controversy in what is becoming a characteristically diplomatic tone: “I know that Italians are a very hospitable people, a people who try to do the most to put their guests at ease and I thank you for this.”

He is also probably thankful for the more than $18 billion in trade deals he has signed so far on his European journey.

European democracy is in a tailspin. Divisions throughout the continent are making it difficult to govern, or even form a government. Anger over years of economic stagnation or government graft, concerns about immigration and fears of terrorism, are causing voters to reject the more traditional, centrist politicians that much of Europe has long known.

“As a result,” writes GlobalPost’s Paul Ames, “Europe's democracies are looking dangerously dysfunctional — and some of them are verging on despotic.”

The Spanish election in mid-December produced no winning majority. And a month of negotiations has left none of the 10 parties represented in parliament able to forge a governing coalition.

Greece last year endured two parliamentary elections, a divisive referendum and months of political crisis. It's now run by an unlikely coalition of the radical left and nationalist right.

On the rare occasions when Europeans still vote to give one party a strong mandate, there's a disturbing tendency for them to lurch dictatorial. That’s what has happened in Poland.

France's mainstream politicians are agonizing over how to stem the rise of the far-right National Front before presidential elections next year. German Chancellor Angela Merkel is expected to run for a fourth term in 2017. But her left-right coalition looks shakier amid unease over her welcoming refugee policies. Meanwhile, Britain could throw Europe into disarray by pulling out of the EU altogether after a referendum expected sometime this year.

The Philippine eagle is one of the largest and deadliest birds in the world. It is capable of killing and devouring a 30-pound deer. Despite the eagle's ferocity, however, it hasn't managed to survive that chief destroyer of all living things: humans.

There are barely any Philippine eagles left. About 90 percent of them are simply shot out of the air for sport. One eagle that was shot, saved, nursed back to health, and then re-released into the wild was almost immediately shot again, killed and left on the jungle floor.

There is some tiny bit of hope, though. And it has arrived in the form of an adorable, white ball of fluff. Conservationists have managed to help two Philippine eagles in captivity breed. If ever there was an ambassador capable of convincing people not to kill eagles, this is it.