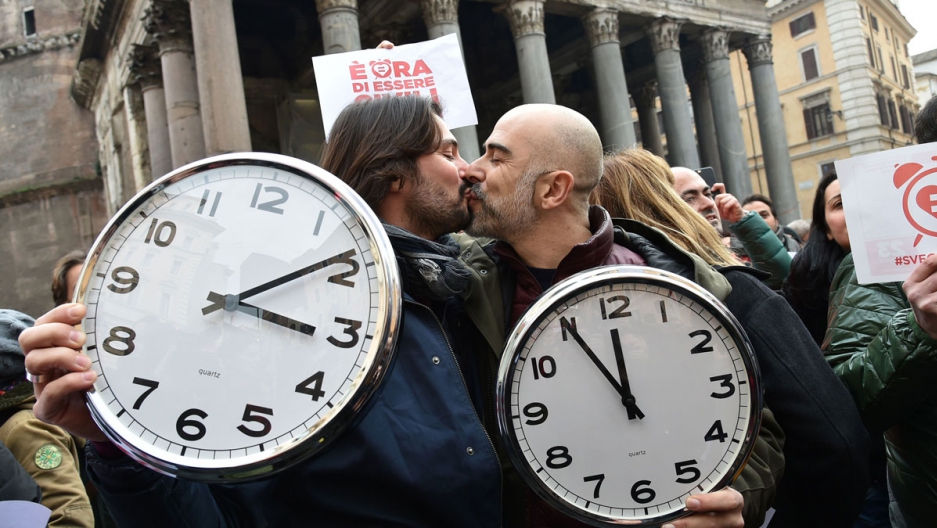 A couple kiss in front of the Pantheon during a demonstration of supporters of same-sex civil union in Rome.

Alarm clocks are not a typical protest prop.

But then Italy is not a typical European country, at least not when it comes to gay rights.

In fact, Italy is the only major country in western Europe not to recognise same-sex civil partnerships or gay marriage. That's led clock-carrying demonstrators in several major Italian cities to take to the streets in recent weeks to call on parliamentarians to vote to recognize civil unions when legislation comes up for debate on Thursday.

"Going out on a street with an alarm clock means, 'Wake up, Italy, it's time to join the rest of the Europe on gay unions,'" says Gianni Riotta, a columnist for the Italian daily La Stampa.

Italy's Prime Minister Matteo Renzi is in favor of the proposal.

But conservative Italians are pushing back.

Still, Gianni Riotta says gay couples in Italy are optimistic that discrimination against homosexuals might be coming to an end.

"Italian society has been ready at least for twenty years," Riotta says. "But the politicians were so afraid before under (Italian Prime Minister Silvio) Berlusconi and now under the center-left to raise the issue."

Conservative Catholics have held large counterdemonstrations denouncing the legislation. But Giotta says their clout is diminishing.

"My dad, who was a very devout Catholic, would say, 'When I was a kid, the churches were filled up with people that were not believers at all. Now the churches are very empty, there are very few people in church, but those that go are very very profoundly devout,'" Giotta says, adding that conservative Catholics no longer make up the majority of Italian society.

"Also you see Papa Bergoglio, the new pontiff Pope Francis, is not pursuing a cultural agenda," he notes. "The Catholic establishment is being very cautious."

The proposed law would legalize gay and straight civil unions and would offer protections married couples enjoy, like tax breaks, access to pensions and inheritance rights.

And the bill's backers argue that relaxing the national ban on same-sex marriage would be a huge boost for Italy's multibillon dollar tourism industry.

Gay rights advocates say the legislation up for debate this week represents only incremental change. But they're confident that it will pass, and that more ambitious efforts will be considered shortly.