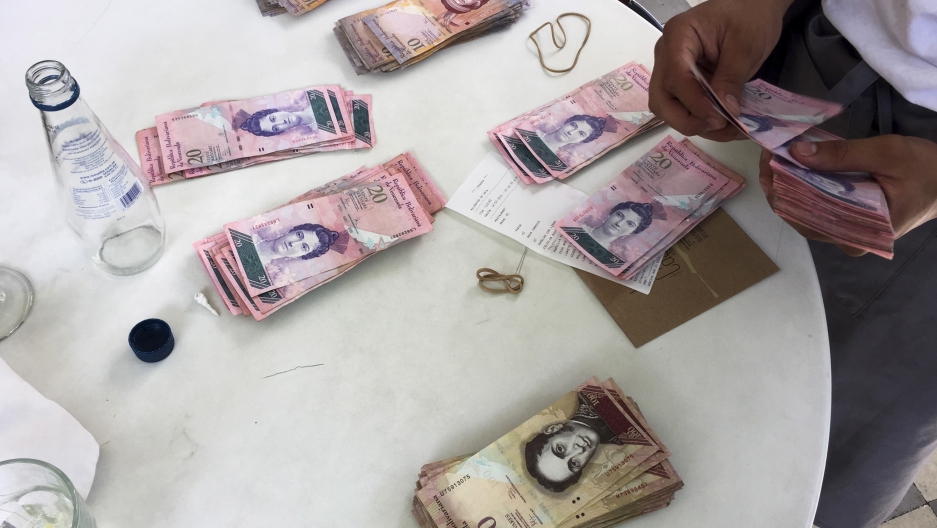 A waiter counts Venezuelan bolivar notes, corresponding to the bill for a lunch of 4 people.

If it hasn't sunk in yet that Venezuela's economy is suffering tremendously right now, have a look at this.

In 2015, consumer prices in Venezuela shot up an estimated annual rate of 275 percent — the world's highest. This year, that rate could more than double to 720 percent.

These staggering inflation numbers came in a note Friday by the International Monetary Fund's Western Hemisphere Director Alejandro Werner. He’s a former economic official of the Mexican government, with an economics PhD from the Massachusetts Institute of Technology.

Other estimates for this year's annual inflation are even worse — as high as 1,000 percent, if Venezuela doesn't change course soon, a Bank of America economist said.

The IMF estimate for last year is considerably higher than the Venezuelan Central Bank’s own 2015 inflation rate of 141.5 percent released last week. But many critics have been accusing the government of hiding economic data since late 2014, so it's not too surprising the IMF number differs.

However, the government sounds like it knows about the problem: On Jan. 15, President Nicolas Maduro announced a 60-day “economic emergency.”

But in a new show of defiance from newly elected opposition legislators, on Jan. 22 the country's congress voted against the president decreeing new emergency powers.

What is going on in Venezuela?

There's a vicious combo of external shocks — like plummeting prices for the crude oil its economy depends on — and domestic problems at play.

The Financial Times put it this way: “Venezuela’s inflation woes are being further compounded by the central bank’s massive money printing operation which has sent the value of the bolivar plummeting. It now takes around 800 bolivares to buy a dollar from black market money traders, compared to less than 200 bolivares just a year ago.”

But astronomical or not, prices may seem meaningless to consumers if products vanish from the shelves, or the operating room.

The shortages Werner's note mentions are terrible, and they include a wide range of medical supplies, food items and other basics. Now it's even hard for a woman to buy birth control pills, as Allison Jackson wrote for GlobalPost.

“We are confronting a true storm,” President Maduro told congress last week. With that, the embattled government may have identified a problem the divided nation can agree on.

Perhaps not the causes, or solutions.

“This is not Maduro’s storm, as some believe,” the president continued, “it is a situation throughout the country that affects every Venezuelan family.”

This story was cross-posted from our partners at GlobalPost.