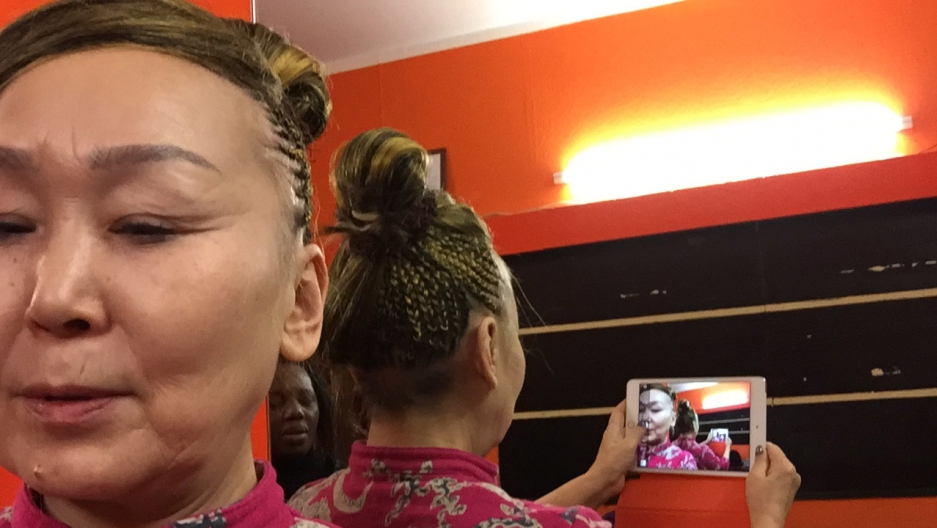 Sainko Namtchylak, a singer from Tuva, was getting cornrows, when we spoke to her from an African hair salon in Vienna.

Yes, it was an unusual place to conduct an interview, but then again, Namtchylak is one of a kind.

You can hear in her speaking voice that buzz, that resonance, that allows her body to make the sounds we in the West generically call throat singing. Raw and unfiltered, that's the voice of Namtchylak. It always buzzes.

But she can quickly go from a near whisper, to volumes more adapted to primal scream therapy.

And recently, that's how she has adapted her style of throat singing.

Namtchylak admits that some people back home in Tuva may not like her "modern interpretation of our traditional ... singing." But others may like it.

She describes her new sound as "a mixture of Asian scales and some kind of traditional Afro-American blues and soul scales."

On her latest recording album, "Like A Bird Or Spirit, Not A Face," Namtchylak teamed up with a Touareg rock ensemble from Mali, Tinawaren.

She mentions how they found a musical connection through their different sounds and that they were  "trying to discover something within improvisation."

And their approach was different. Namtchylak explains that Tinawaren were very careful in the studio. And that "each movement ... was silent." As a result she says, their approach would get "inside listeners," she says.

"Tuvans talk loud and express our emotions," she says. "I'm just the loud one ... an expressive singer."

At first the difference between their recording and performance styles frightened her. It was strange.

But, at the same time she was excited. Tinawaren taught her silence — to sing "very quiet."

When our interview with Namtchylak ended, she performed an impromptu song for us. She sang it right there in her chair at the hair salon.