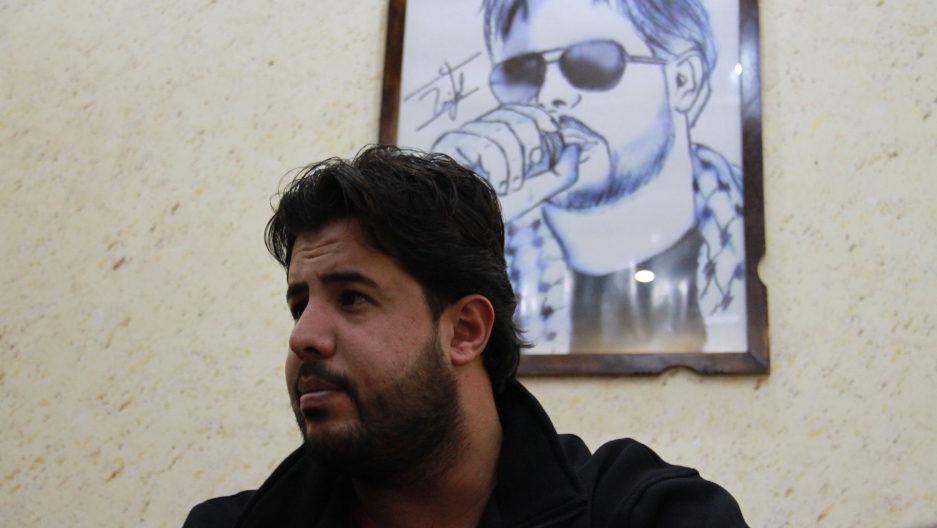 Palestinian singer Qassem Al Najjar says none of his songs are about the stabbings of Israelis. He doesn't support the stabbings but he says he understands them.

It’s not uncommon these days for a car to drive through the West Bank city of Ramallah blasting the Palestinian song “Stab, Stab.”

With the ongoing wave of Palestinian stabbings and other attacks on Israelis has come a wave of songs supporting the attackers.

There have been near daily Palestinian attacks and attempted attacks on Israelis — mostly stabbings but also car rammings and shootings. Palestinians have been killed by Israeli fire in the process.

Palestinians say the violence reflects frustration after almost 50 years of Israeli military occupation, but Israel blames the violence on incitement on social media — and in the songs Palestinians are writing and singing in support of the violence.

At DVD Store in Ramallah, a record seller unwrapped a new album, popped it in his computer, and played the most popular tune: “Ushaq i-Taen,” or “The Lovers of Stabbing.”

“With the knife you put in a soldier, you create a panic bigger than an earthquake,” a line of the chorus goes.

It’s the record seller’s favorite. His name is Mohammed Karabseh, and he’s 17 years old, the age of many Palestinians who have grabbed knives, stabbed Israelis, and gotten killed.

“It makes me feel very mad for the martyrs,” he said. “When I listen to these songs I feel I am in their place. I start feeling for their family.”

When the stabbings were at their peak a few months ago, albums were released with tunes like “Stab, Stab” and “Jerusalem is Burning.”

Now new compilations are coming out. A few blocks away, a shop called Ramallah Records stocks a new CD called  “Martyr’s Wedding Party.” The man running the shop, who identified himself as Fadi, played a track called “Sha’aluha,” or “Fire It.”

Fadi said the company did not put its name on the CD so it would not get in trouble with Israeli authorities.

“Maybe people outside our country, when they listen to these songs, they say, ‘These people want to kill only.’ But this is the only way to make our land free,” Fadi said.

He said violence can’t bring a solution to the Israeli-Palestinian conflict, but it can be an effective tool of pressure.

“Violence only brings violence. However, for me to be a partner in creating a solution, I have to be strong. And unfortunately the only strength I have is when I act in a violent way. People pay attention to me,” Fadi said.

One guy who young Palestinians are paying attention to is Qassem Al Najjar.

The 30-year-old artist recorded “Behimish,” or “It Doesn’t Matter,” a song that says that Palestinians will continue to resist no matter what Israel does to them.

Another song of his, “Do You Know What Uprising Is?” is the title track on the album on sale at DVD Store in Ramallah.

The word “intifada,” or uprising, is in the shape of flames on the front of the CD. But Najjar insists his songs do not encourage violence.

“I don’t have one song that talks about stabbing. I’m against stabbing,” Al Najjar said in an interview from his home in the West Bank village of Burin. “But I can understand all the means Palestinians use in resisting the occupation.”

He said he’s “fed up” with writing “resistance” songs.

“I want to sing for my beloved. I want to sing a romantic song. But presence of Israeli occupation puts a big mission and duty on my shoulders,” Al Najjar said.

So the fighting songs are big hits when he performs at weddings, he said. But Karabseh, the record seller at DVD Store, said he recently stopped blaring the tunes from his shop.

He said people at the mall where he works complained. They told him the songs provoke and get Palestinians nowhere.