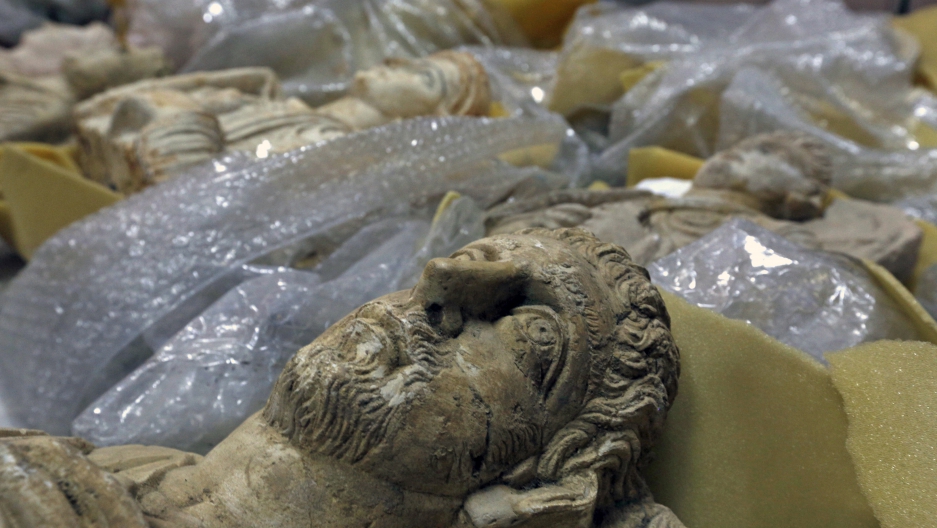 Thousands of priceless antiques from across war-ravaged Syria are gathered in the capital of Damascus to be stored safely away from the hands of ISIS militants and the ongoing war across most of the country in August 2015. Syria is a cultural treasure trove and home to six UNESCO World Heritage sites. Four of these sites, including Palmyra and the Crusader castle Crac des Chevaliers, have been used for military purposes, the United Nations says.

Swipe right and behold: the satellite photo shows St. Elijah’s, the oldest Christian monastery in Iraq and a real world testament to the Middle East as the birthplace of Christianity. The monastery was first built by the Sixth Century Assyrian Christian monk, St. Elijah.

In its later incarnation, the holy site endured as a place of worship for 1,400 years.

A pile of rubble now sits where the monastery’s ancient buildings once stood, seen clearly in a satellite picture released this week by the Associated Press.

“Physically ill,” is how Michael Peppard says he felt when he looked at the images of the destruction of St. Elijah’s.

“The tragedy that has been taking place among civilians in Syria and Iraq is paralleled now by what we’re seeing with the destruction of cultural heritage,” says Peppard, an associate professor in the department of theology at Fordham University.

The monastery of St. Elijah’s is just one of more than 100 historic sites pillaged and razed by ISIS, which controls large parts of Iraq and Syria. ISIS extremists have destroyed churches, temples, shrines, tombs, anything that doesn’t fit the group’s radical version of Islam.

Irina Bokova, director general of UNESCO, called the destruction of St. Elijah’s, “yet another violent attack against the Iraqi people, which confirms the crimes against humanity suffered by the Christian population, and the extent of the cultural cleansing underway in Iraq.”

“Such deliberate destruction is a war crime and it must not stay unpunished. It also reminds us how terrified by history the extremists are, because understanding the past undermines the pretexts they use to justify these crimes and exposes them as expressions of pure hatred and ignorance. Despite their relentless crimes, extremists will never be able to erase history,” Bokova said.

But the ideological extremism of ISIS doesn’t mean the group is above making a profit on the past.

“On the one hand, they’re destroying monumental items, things like St. Elijah’s monastery ... buildings and statues,” Peppard says. “Anything that is portable, that has been discovered, for example, through a systematized looting operation, is being monetized and used as a currency and sold abroad.”

The sale of antiquities has become an important source of revenue for ISIS, he says.

There could be one tiny shred of good news here. If ISIS continues to facilitate the excavation and sale of artifacts, that means some antiquities could potentially make their way into the hands of experts who could learn from them and preserve them for future generations.

But Peppard says, “There’s also a sense in which this feeds a continued black market ... and cycle of corruption. So, most people who study antiquities and do archeology would say, ‘Absolutely not. We don’t want these things happening.’”

It’s also worth mentioning, Peppard adds, that these artifacts are important to the national identity of people where they're being looted from.

“When [antiquities] get sent out of the country, most of them are never coming back. Most of them are going to private collectors and they will not see the light of day, either by scholars or by folks in Syria and Iraq.”

Since the start of the civil war in Syria, new efforts to track stolen antiquities have been launched. One of them started last summer, when the American Schools of Oriental Research joined with the US State Department to “document, monitor, and report on cultural heritage damage in Syria.”

The multi-lingual Association for the Protection of Syrian Archeology is doing similar work.

Historical sites in Syria and Iraq still hold plenty of secrets. The city of Dura-Europos in eastern Syria on the Euphrates River, for example, is the setting for Peppard’s new book, “The World’s Oldest Church.”

“We find there a really shocking amount of cultural pluralism, in language, in ethnicity, in religion,” he says. Peppard says the earliest known Christian building dating back to the third century was located very near one of the oldest known synagogues, and they both sat close to various temples devoted to deities from Persia, Greece, and Rome.

“So, we have an awful lot of religious diversity in a walled city that’s roughly the size of, I don’t know, New Haven, Connecticut.”

That was the case with many other Syrian cities in ancient times, Peppard says, which contradicts an often-repeated notion floated by President Barack Obama during his recent State of the Union speech. Obama mentioned conflicts in the Middle East that “date back millennia” as one reason for instability.