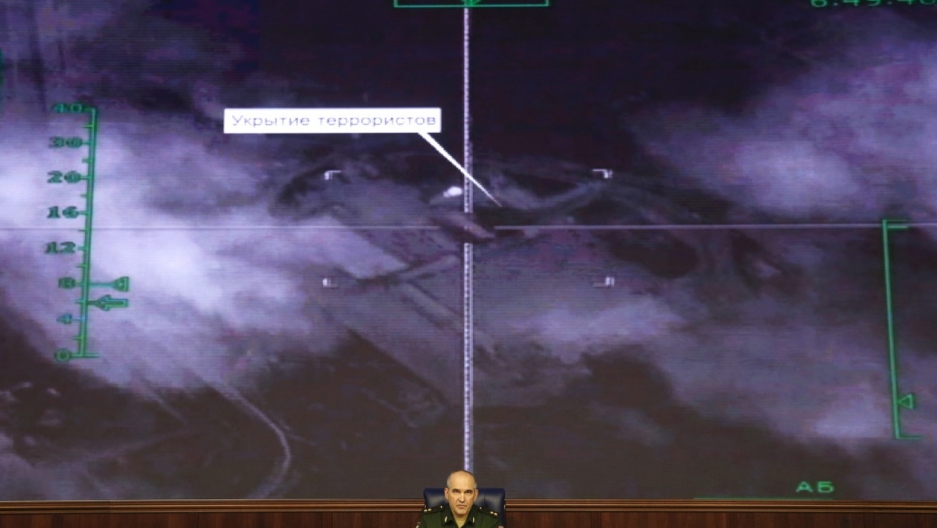 The jet takes off, whizzes away, pierces the blue sky, scatters its bombs, and gently touches back down — all in the span of 90 seconds.

Welcome to Russia’s air war in Syria, online and in high-definition. Where Western leaders and much of the world see indiscriminate attacks, most Russians see precision and resolve.

While the pro-Kremlin media have been cheerleading Russia’s bombing campaign there since it began on Sept. 30, the Defense Ministry has been online, providing stirring images of its strikes against the Islamic State and other militants.

For example, watch this video released Tuesday of a Russian Su-24 on a sortie from an airbase near the Syrian city of Latakia:

The images and footage are part of a PR effort aimed at selling the war to the population. With the help of social media, Kremlin propagandists are also making the campaign look sleek and efficient in order to court the country’s youth — or “Generation Putin,” as the Wall Street Journal reports.

It's also an opportunity to show off the country’s military prowess as Moscow squares off with the West in a Cold War-style geopolitical showdown. Russia may not have wanted to promote its military presence in rebel-held eastern Ukraine, but it fully stands behind the airstrikes in Syria.

More from GlobalPost: This is what the Russians are saying about Moscow’s airstrikes in Syria

True, the United States and its allies have been known to publicize their own military airstrikes, too. But in Russia’s case, it reflects a new development that might worry the West.

Experts say the Kremlin has boosted the military’s strength and professionalism in recent years through various reforms, even though they’ve been aimed mostly at improving the army’s capabilities within the former Soviet Union.

“The situation today differs fundamentally from that of the Cold War,” says a recent report from the European Council on Foreign Relations. “Russia now has the advantage of geographic proximity to the potential frontline, and can move fast and without warning, unlike Europe.”

But behind Russia's showmanship lies what critics say is a dark truth: Not only do Western leaders accuse Moscow of targeting moderate rebels — they say the Russian Air Force has also indiscriminately bombed civilians.

On Wednesday, a pro-opposition Syria monitoring group made the startling claim that Russian airstrikes in Syria allegedly have killed 1,015 civilians, including more than 200 children, since they started almost four months ago. (The US-led coalition and various militant groups have also been blamed for heavy civilian casualties while fighting in Syria and Iraq.)

The Kremlin says its involvement in Syria is to fight terrorists, even though it has also acknowledged sending military equipment to help Syrian President Bashar al-Assad, an ally of President Vladimir Putin. Assad considers all militants fighting his government to be terrorists, including fighters somewhat friendly to the West.

Military strikes against non-IS targets are only hurting the cause, according to the Syrian Emergency Task Force advocacy group in Washington, DC.

“This not only represents an endless humanitarian horror,” the group's deputy director Evan Barrett wrote this week in Foreign Policy, “but the brutal destruction of the very community the West will need to work with to defeat the Islamic State.”