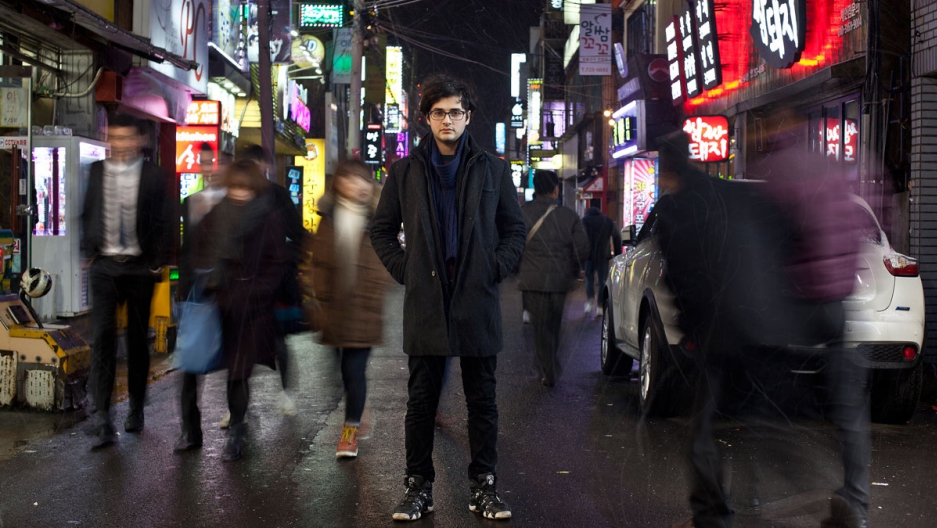 Ahmed Lababidi left his war torn hometown, Aleppo, Syria, fleeing across the Turkish border in 2012. He followed his younger brother to South Korea and settled on the island of Jeju.

Jeju Island, with its black volcanic rock and proximity to Seoul, is a honeymoon destination for many South Koreans. For one young Syrian man, though, Jeju is now home — though for how much longer is anyone’s guess.

Ahmed Lababidi, 22, left the war-ravaged city of Aleppo back in 2012, fleeing across the Turkish border. He followed his younger brother on a journey to South Korea, where they were able to secure visas with the help of a Syrian businessman in Seoul.

Soon after, Lababidi applied for refugee status, but he says Korean immigration officials told him that since he fled Syria “just because of war” they wouldn’t offer him asylum.

“I can stay here, but not as a refugee”, he recalls being told.

While on a trip to Jeju, Lababidi got sick and wound up in an emergency room. Doctors diagnosed him with Crohn’s disease, an inflammatory bowel condition. He says it flares up whenever he gets stressed-out — and that seems to happen whenever he leaves Jeju Island.

“I went to Seoul many times,” he says. “The weird thing is that whenever I go there, I start bleeding [internally].”

Lababidi says he wants to stay on Jeju, where he appreciates the relative calmness of the island. He’s also made some friends through his job waiting tables at a local Indian restaurant, and it’s helped improve his Korean language skills. 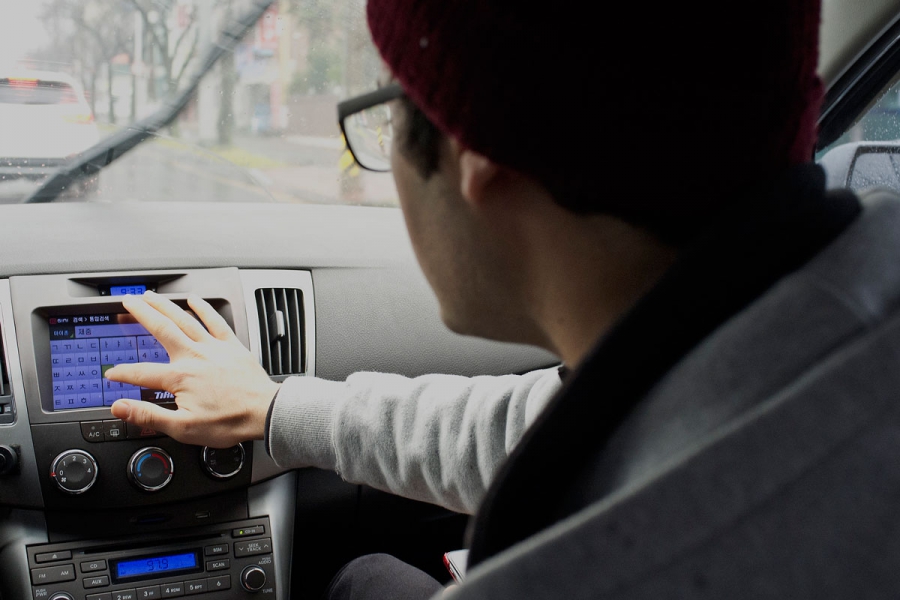 Ahmed Lababidi on the bus around the island. He takes the bus to work, but on Sundays, he has to take a taxi sometimes. With quite good Korean language proficiency he programs the navigation for the taxi driver.

But picking up the language rather quickly coupled with the fact that he’s the only Syrian on the island, raised some suspicions. One time a local police officer paid him a visit and insinuated that Lababidi might be a spy, though not for ISIS.

“They said these days we have a lot of spies from North Korea, and the Syrian and North Korean governments ... have a friendship,” Lababidi says. “[But] after they met me, they said we are sorry, you look like a kind person.”

Korean authorities also paid Lababidi — and reportedly every other Syrian living in South Korea — a visit shortly after the terrorist attacks in Paris last November.

“I feel bad, why they come to me? They think I am a terrorist?” But Lababidi adds that he understands that the police were just doing their job.

Still, some South Korean politicians keep bring up the potential link between Syrian refugees and terrorism, says Chung Shin-young at Advocates for Public Interest Law in Seoul, a firm that helps asylum seekers.

“The government is really intentionally using this xenophobia and fear,” Chung says, as a way to keep from granting refugee status, particularly for Muslims. 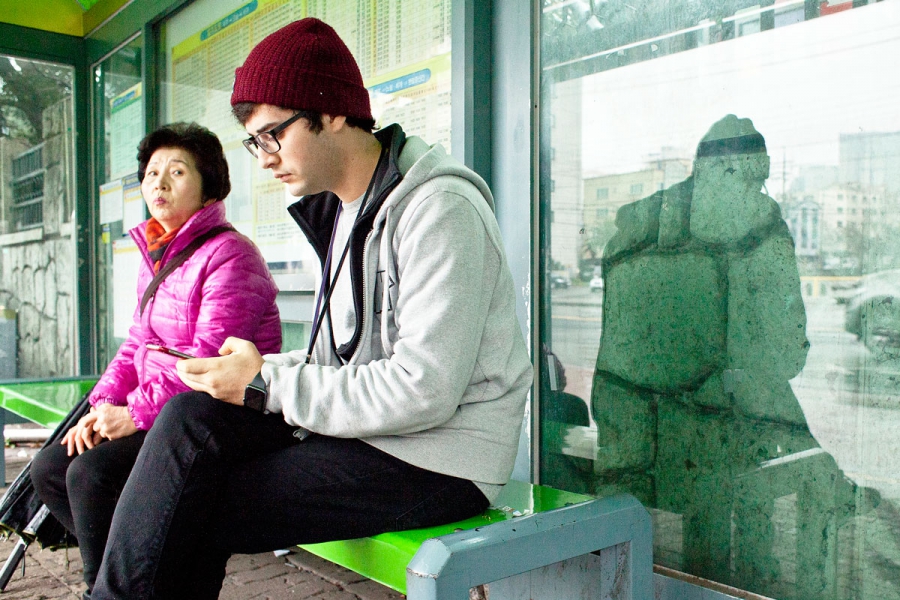 Ahmed Lababidi checks his phone waiting for the bus.

She points out that immigration authorities have granted refugee status to only three out of roughly 850 Syrian asylum seekers. She adds that the temporary humanitarian visas that most applicants receive allow the government to avoid financial responsibility while not sending Syrians back to a warzone.

An official at South Korea’s Ministry of Justice, who asked not to be identified, writes in an email that the agency “fairly evaluates refugee applications and bases decisions on evidence that the asylum seeker would be persecuted if they return home.”

The official declined to explain how long a humanitarian visa lasts and how many times it can be renewed.

Ahmed Lababidi says he told immigration authorities that he’d be in danger if he went back because he’s criticized the Syrian government on Facebook, but Korean officials told him to consider another way of staying in Korea.

“They said if you want, just get married to a Korean,” Lababidi says, adding that this is not the way he’d like to obtain residency here. 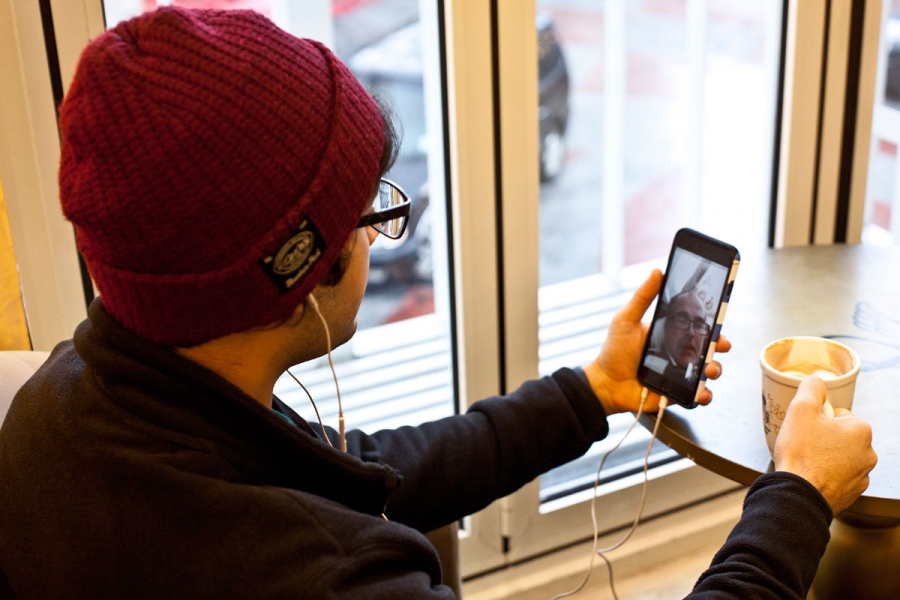 Ahmed Lababidi's smartphone has become an integral part of his life in Korea. And he uses it to stay in touch with his family in Turkey. Here he's talking to his father via video chat.

Another option for some kind of permanent residence might involve moving again. Lababidi’s parents are now in Turkey, and hope to apply for refugee status once they get to Europe. If that came through, he might be able to join them there. But he doesn’t want to give up his life on Jeju.

He says he’s still holding out hope that Korean officials will reconsider his asylum request and then he could bring his parents here.

“Wherever I go around Jeju, I think about them,” Lababidi says. “They cannot see these kind of places, they cannot feel this kind of life here.”