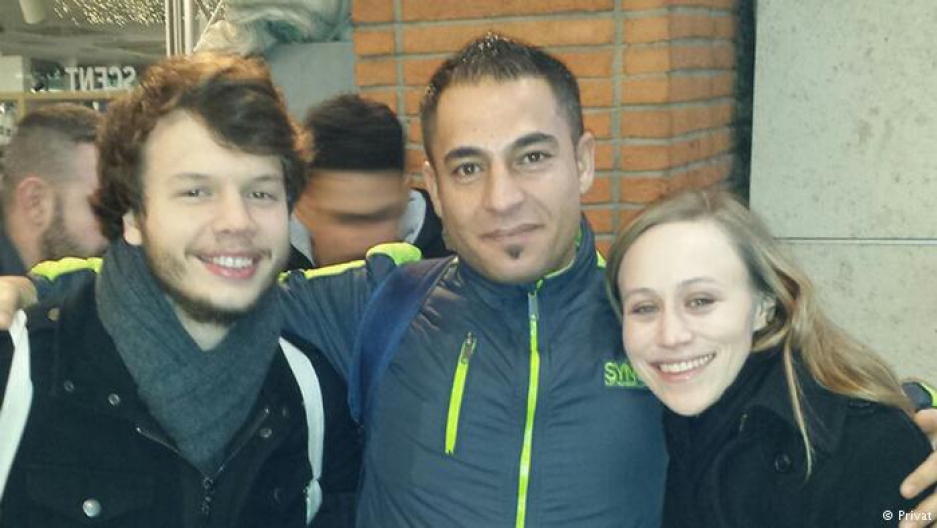 She'd already been assaulted, twice, by the mobs that gathered near Cologne's train station on New Year's Eve.

Then she heard a voice in German. He was a Syrian refugee.

He was coming to her aid.

"He came up to me and said, 'Kann ich dir helfen?' which in German is 'Can I help you?'" Duncan says. "He made sure to keep a distance between us, and he looked really concerned."

To say she was uncertain would be an understatement. "At this point, I had been attacked for the second time by this larger group, groped all over my body, my hair pulled."

The world knows of the attacks on scores of women as Cologne brought in the New Year. But the story of 5-foot-2 American neuroscience student — and her Muslim rescuers — stands out.

At that moment, she was sobbing, disheveled, distraught. Separated from her German boyfriend and her cellphone. And it became clear to her new Syrian protector that she knew limited German. So the Syrian man went to get his friend, Hesham Ahmad Mohammad, who spoke English.

The men volunteered to help Duncan locate her boyfriend.

"They first said, 'OK, you can use our phone,'" she says, adding that in the craziness of the moment she couldn't remember her boyfriend's number.

Then they went one step further: They offered Duncan 70 euros for a taxi back to her boyfriend's home. But she wanted to stay and keep looking for her friend.

"I helped her because she was alone, and she was crying," says Hesham Ahmad Mohammad. "I take hand of Caitlin. I make Caitlin behind me and I speak with high voice, saying, 'If you want problem, I can make problem.' My friends hear my voice, they came to me, to be beside me. First of all I say to them, 'We must make circle about Caitlin because somebody tried to kiss her or to touch her, she didn't need that again.' Because I am Muslim, I cannot leave anybody who needs help alone. From my story people know there are good refugees, good people. They will help anybody."

Hesham and his friends found Duncan's companion based on her description of the bag he was carrying. Then they chatted, and struck up a friendship. Hesham told Duncan he's a former primary school teacher from the northern Syrian city of Aleppo. He left a wife and two sons behind in Turkey. He's waiting to hear the results of his asylum application.

Looking back on the evening, Duncan says she understands the fear and anger many German women feel in the aftermath of the New Year's Eve assaults.

"I do think however it should be directed at the individuals, those people specifically who committed the crime," she says, "And not generalize it to an entire group of people based on a religion or a country of citizenship."

Duncan says she hopes her story will provide nuance for those who would paint all the newcomers to Germany with the same brush.