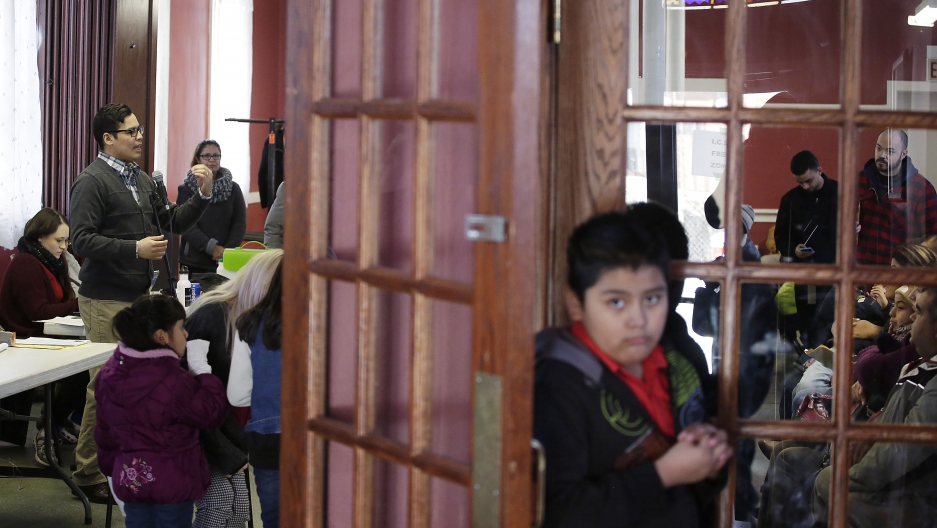 Across the United States, immigrant groups are gathering to offer Central Americans legal advice in the face of stepped up deportations. In Chicago, Pastor Emma Lozano talks to migrants at a workshop held by the Familia Latina Unida and Centro Sin Fronteras in early January.

For many Central American families across the United States, the new year started with the fear of deportation.

Starting in early January, President Barack Obama's administration launched a controversial initiative to arrest and deport undocumented migrants from Central America seeking asylum in the US. Many have left because of rampant violence in their countries, especially Honduras and El Salvador.

So far, the deportations have largely been confined to states such as Georgia, North Carolina and Texas. Still, Central Americans in the Los Angeles area — the largest in the country — increasingly fear raids and deportations.

At a recent evening community meeting at the Los Angeles offices of the Central American Resource Center, or CARECEN, people gathered to demand an end to the raids. Teresa Borden, a spokesperson for CARECEN, says, “every time there is news of raids ... there’s a lot of fear that happens, there’s a lot of panic."

The Obama administration says the deportations are focused on Central American migrants who arrived in the US after May 2014 and who have exhausted all legal remedies for staying in the country. Government officials add that the actions are meant to discourage families from sending unaccompanied children to the US.

But other undocumented Central Americans, who have been in the United States for a longer period of time, fear they could be swept up in the raids. One person playing close attention to the deportations is Julyssa Guevara. Many of her family members are from Guatemala and are in the US illegally. “I live in the daily fear that my family members are not going to come home. I am living in terror right now,” she says. “It never goes away. It’s a nightmare. It’s a recurring nightmare.”

In response to such fears, Los Angeles-area groups that work with undocumented migrants, such as CARECEN, are organizing know-your-rights classes. “We’ve been telling folks some very basic things regarding knowing their rights: their right to remain silent, not to open the door to anyone who says 'Hi, we’re ICE,'" says Borden. "They need to have an arrest warrant and a search warrant if they are going to search. So we are telling people that they do not have to provide any information except perhaps their name to the authorities. In fact, that is the better option because anything they say can be used against them.”

In addition, diplomats from Central American countries whose nationals are threatened with deportation are responding. “The only thing we expect is that the human rights of our people don’t get violated by the authorities,” says Roberto Archila, Guatemala’s consul general in Los Angeles. Archila says he has assigned himself and other diplomats in the consulate to help undocumented Guatemalans who might be taken into custody.

In interviews with Spanish-language media, Archila has given out a number to a cellphone that he personally carries, a number that people threatened with deportation can call. “Any Guatemalan who needs information, who needs help, can call this number,” he says. "I answer the call. It is part of my job.”

Afraid that her relatives could be detained, Julyssa Guevara says she and her family have a plan to contact each other and a lawyer in case there is any trouble with immigration authorities. She likens it to how families plan for a natural disaster. “What do we do if something were to happen?” says Guevara. "What do we do if immigration comes to knock on our door, or a family member’s door? Just how we prepare for an earthquake and a fire, that’s how we prepare for this.”