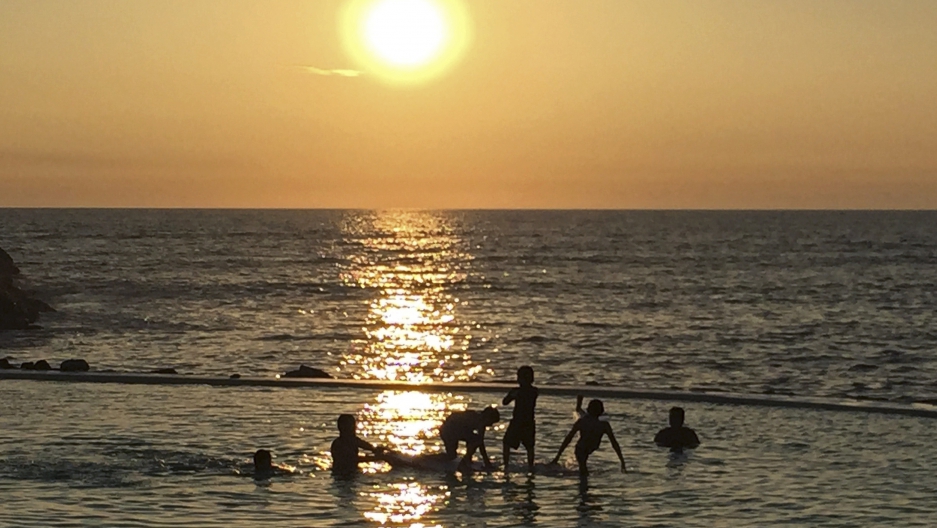 Children play in a pool in front of Punta Hermosa beach, south of Lima, on Jan. 2, 2015.
Credit: Mariana Bazo
Share

LIMA, Peru — In the depths of the northern winter, spare a thought for Southern Americans suffering from too much sunshine.

No, really. It’s a serious problem. Parts of Peru, Bolivia, Chile and northern Argentina are experiencing such ferocious ultraviolet radiation right now that doctors are warning locals to stay inside during much of the day.

Exposure to excessive UV radiation can cause a long list of serious health problems, including skin and eye cancer, premature aging of the skin, cataracts, and even immune system suppression.

According to the UV register, any score of 11 or more indicates “extreme” levels of ultraviolet radiation, to be avoided entirely.

This week, levels of UV rays in the Chilean capital of Santiago are scheduled to soar to nearly 15, while in the Bolivian capital, La Paz, they're expected to surpass 18. But the worst hit may be Cuzco, the Peruvian city that was once the center of the Inca Empire and is now a tourist mecca; it is forecast to hit a troubling 19 on Friday.

The reason is partly natural and partly man-made. All three cities are in the southern tropics, where the sun blazes down almost directly for much of the day at this time of year.

Then add in altitude, with La Paz and Cuzco both around 11,000 feet above sea level, meaning there are two fewer miles of Earth’s atmosphere above them to filter out harmful rays.

But above all, the problem is that the ozone layer above this part of the planet is particularly thin.

That’s in part because the ozone layer everywhere is still recovering from ozone-killing pollution by chemicals once used in a range of products, including aerosols and fridges, until they were banned by the 1987 Montreal Protocol.

More from GlobalPost: 5 countries spew more plastic into the oceans than the rest of the world together

But it’s also just an unfortunate result of natural circumstances, including high altitude winds that prevent ozone from accumulating in this neck of the woods.

“The ozone doesn’t hang about over this part of South America. It drifts into the upper atmosphere and from there it is quickly dispersed by the currents,” Orlando Ccora, of Peru’s national meteorology agency, SENAHMI, told GlobalPost.

The result is that authorities are heeding medical advice and warning local people to stay indoors between the peak hours of around 10am and 4pm. In Bolivia, there is even a law requiring parents to send their kids to school with a hat.

Yet with many, in Peru and Bolivia particularly, living both directly from the land and below the poverty line, the message may not be getting through.

Paulina Mendoza, a doctor who heads the skin cancer program at the La Paz branch of the Bolivian Society of Dermatology, says she is seeing more and more skin cancer patients in their 40s, although the Andean nation lacks hard numbers about the number of cases.

Due to the dark skin of most Bolivians, however, mortality rates remain low, at around 0.2 percent of diagnosed cases.

In Peru, meanwhile, there have been reports of a rising number of skin cancer cases, even among teens.

“There is a lack of education and awareness,” Mendoza added. “We need continuous campaigns, targeted at everyone from children upwards. It is very hard. We are talking about a way of life. Telling a campesino [farmer] not to work at midday, well they are not going to listen to you.”

The sort-of good news is that even the current dangerous levels of UV radiation remain far short of the UV world record of 43 — approaching levels on Mars — registered on the summit of a 19,000-foot Bolivian volcano in 2003.