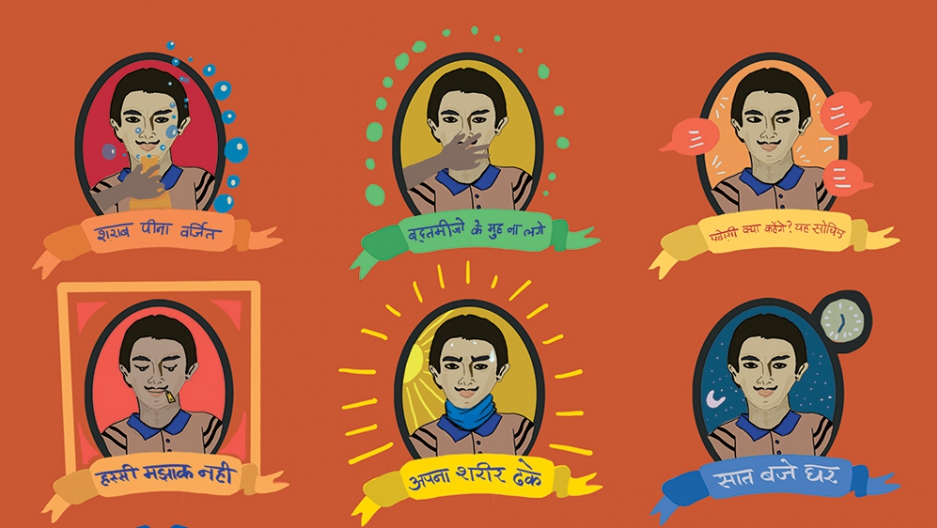 Some of the rules for men on Roshnee Desai's taxi fabric mimic unwritten norms for women in public, such as how to speak, what to wear and when to be home at night.

In India, segregation of the sexes is a very real thing. Sure, men and women mingle, but we’re singled out in the strangest of places. For instance, in malls, hotels and airports, women go through separate lines for security checks, which are specifically conducted by female staff.

In post offices and train stations there are separate “ladies” queues for stamps and tickets. And on every bus, metro and local train, there are separate sections for women. In fact, we not only have women’s seats, but also entire compartments: In Mumbai, there’s an entire train, the “Ladies Special,” only for women. 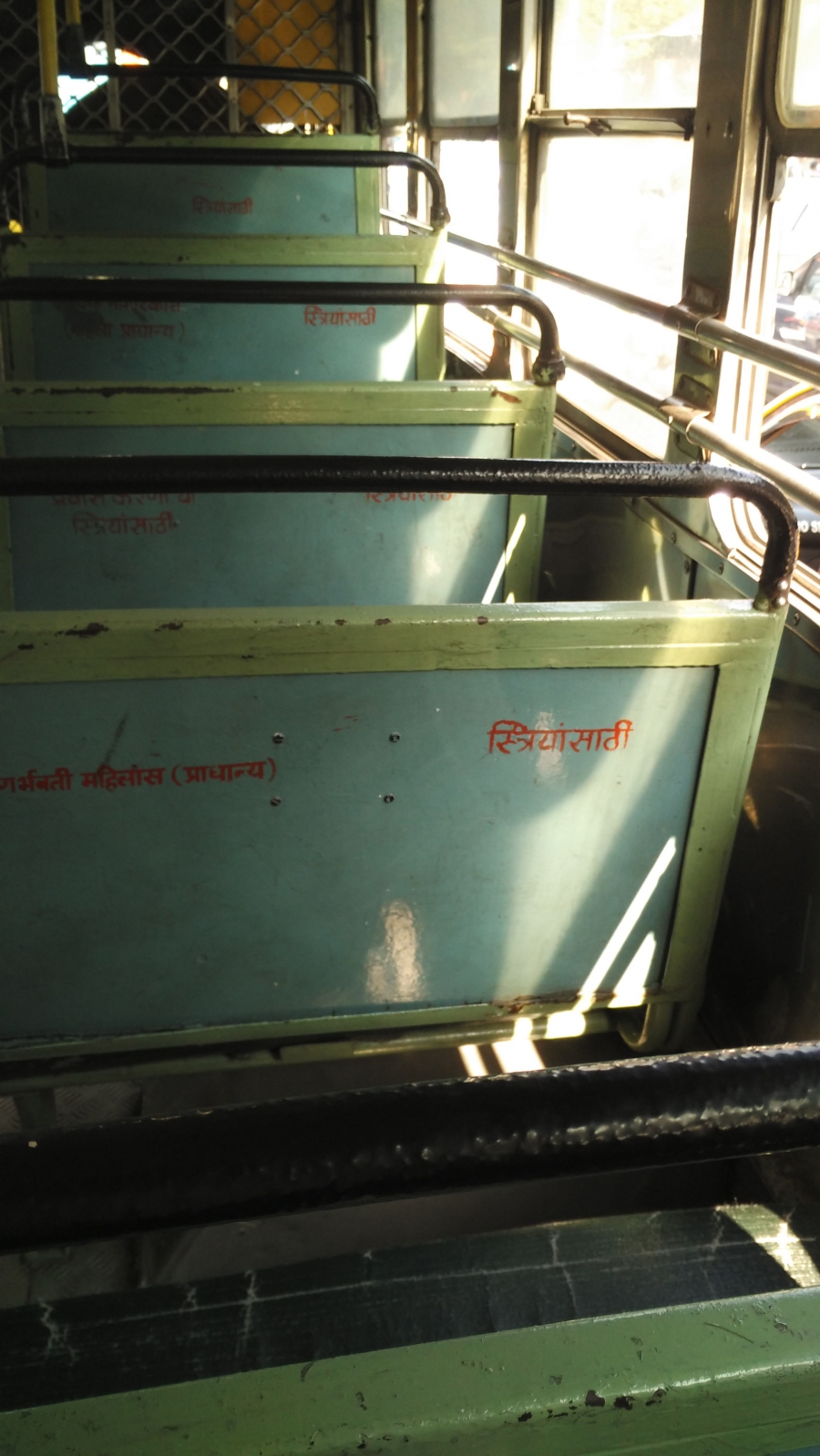 "Ladies' Only" seats on a Mumbai bus.

It can seem nice, but women quickly realize what happens when they leave the gilded cage. One morning I jumped into the “general” compartment of a train — a place where women typically don’t travel unless they are with a male companion. But the train was just about to depart, and that compartment door was closest to me.

I figured everything was going to be fine; everything was fine for the first few stops. As the train got crowded, though, I realized I had three men pressed up against me, all avoiding eye contact, all making me uncomfortable. I finally jumped off at a station and ran the length of the platform to the safety of the ladies’ compartment. It was humiliating as well as infuriating. I travel only in the ladies’ compartment now, or in a taxi.

“A woman travels with sets of rules they are conditioned to follow: Make sure cleavage isn’t showing, your legs are covered, no one is staring, no one is trying to brush past you.” She points out that women often carry a bag in front of their breasts like armor, protection against the groping from an anonymous hand in a crowded bus.

But Desai is determined to put the shoe on the other foot. She has her chance as one of 20 artists who have created upholstery for a moving art installation collective called Taxi Fabric.

A taxi with rules for men

Mumbai’s taxis are always a treat. They’re cheap, of course, and they’re always colorful. The décor is generally a one-off, chosen by the driver and it’s sometimes lovely — with abstract geometric designs in muted colors — and sometimes garish.

Desai’s fabric has rules called Only For Men. Along with a little mustachioed man, there is a line of text in Hindi: Be home at 7 p.m.; don’t sit with your legs apart; don’t look at unknown women; don’t use curse words; cover your body with your bag; don’t let your undershirt show.

This last one cracks me up. Desai is quick to explain: “If you’re in a public space, if you’re in a train — invariably there will be a random woman who will say, ‘Excuse me madam, your bra strap is showing.’ And this is the protocol: You have to say, ‘Thank you ma’am, thank you so much. You are the savior of my dignity and without you I would have been shamed.’ And that to me has been so annoying, because men have three buttons open, they’re showing their chest hair and undershirt.”

The conversation I had with Ramji Pal, the driver of Desai’s “Only For Men” taxi was rather interesting. He seems quite proud of his unique interiors.

“I like having this taxi fabric,” he told me. “When people sit in the taxi, it always gets a conversation going. They ask me about it. It’s not a joke. They realize it’s a serious thing.”

Ramji plies his cab from 8:30 in the morning to about 8 at night. Every day, he carries anywhere between 30 and 100 passengers. 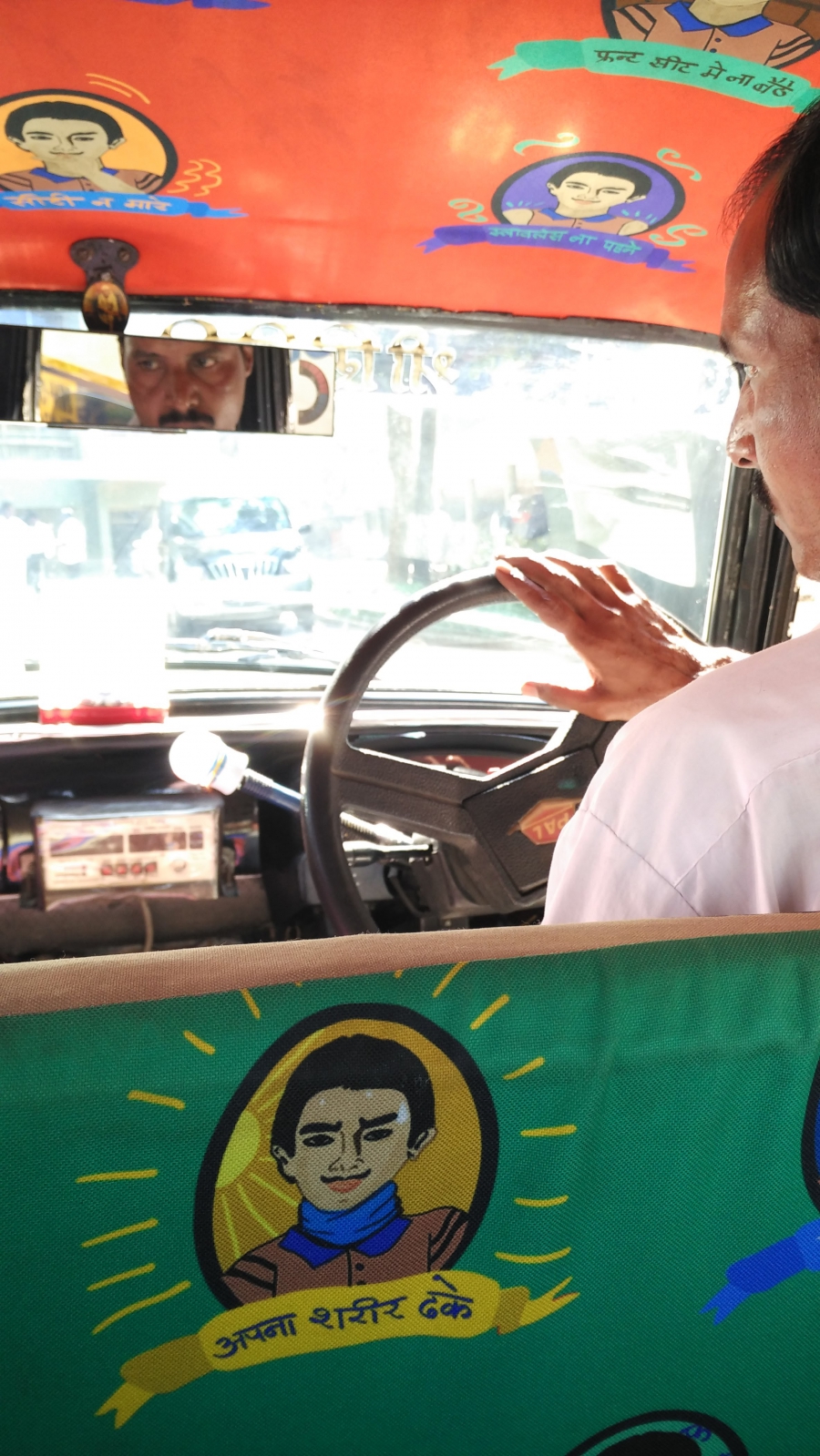 Driver Ramji Pal in his "Only for Men" taxi.

As I get into his taxi with my headphones on and mic pointed at him, we attract a small crowd of security guards, drivers and even the clothes ironing man. It becomes clear that along with the men who’ve joined us, Pal takes these rules inscribed on his taxi quite literally.

I ask them: “It says here that men shouldn’t sit in the front seat.”

“Think about women,” I say. “Do they ever sit in the front seat with the driver?”

“No. If she is with a driver, she sits in the back. Women should only sit in the front if they are with their husband. This is the rule,” the driver says.

“It isn’t written anywhere, but it’s like that,” says another male passenger.

“What about the rule that says boys should be home by 7 p.m.?” I ask. This makes them laugh. “Who gets told this?” I press on.

The whole time I have this feeling that they’re on the verge of understanding the dichotomy, the double standard — and then at the last minute, they drop the ball.

The driver declares: “Both men and women have rights, but they have to exercise them within limits.”

Artistic irony and playfulness also seem to have their limits for the working-class men clustered around the taxi. First of all, these guys do not travel by taxi, and second, to them it’s only natural that women follow different sets of rules. The tongue-in-cheek nature of this art seems lost on them.

But designer Roshnee Desai says she’s found the response to her artwork fantastic. People tell her it made them stop to think. “It’s funny, but it’s not a joke,” they tell her.

“Where a man has to follow the rules, even to a woman this looks really ridiculous. It makes you chuckle,” she says. “It is starting conversations, and I think a taxi is a great place for a conversation to happen.”