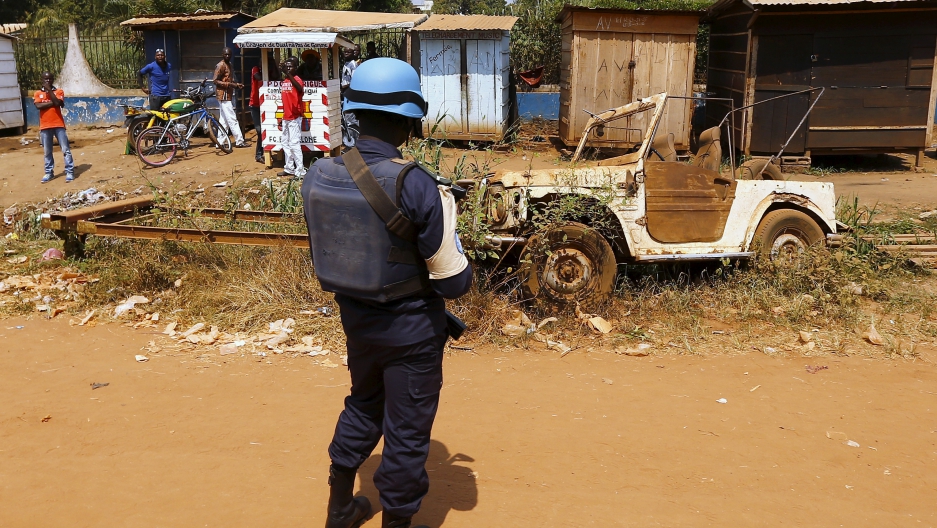 A United Nations peacekeeper stands alongside a road before Pope Francis' visit to the refugee camp of Saint Sauveur, in the capital Bangui, November 29, 2015.
Credit: Stefano Rellandini
Share

JOHANNESBURG, South Africa — The United Nations vowed to act quickly after a December inquiry found it had failed to respond to allegations of child abuse against peacekeepers in the Central African Republic.

Less than a month later, new accusations of sexual abuse are threatening to undermine the UN’s work as it keeps peace in CAR during crucial elections, the first after several years of civil war.

The latest allegations, according to The Washington Post, are that at least four UN peacekeepers paid girls as young as 13 for sex in M’poko, a camp for internally displaced people in the capital Bangui. The girls, part of a prostitution ring, were reportedly paid between 50 cents and three dollars.

More from GlobalPost: Major cases of sex abuse by troops on international missions

According to the Post, workers with the UN mission in CAR have been accused of 22 incidents of alleged sexual abuse or sexual exploitation during a little more than a year, not including incidents exposed in the latest report.

Last month an independent panel concluded that UN officials had failed to protect the very people they are sent to safeguard.

Ban Ki-moon, the UN secretary general, appointed the panel following allegations that French soldiers in CAR had sexually abused children in exchange for food or money.

The panel's report found that officials had “turned a blind eye to the criminal actions of individual troops,” and failed to protect the children. The welfare of victims, and the accountability of the perpetrators, “appeared to be an afterthought, if considered at all.”

“Information about the allegations was passed from desk to desk, inbox to inbox, across multiple UN offices, with no one willing to take responsibility to address the serious human-rights violations," the report said.

“In the absence of concrete action to address wrongdoing by the very persons sent to protect vulnerable populations, the credibility of the UN and the future of peacekeeping operations are in jeopardy."

Ban, who has previously referred to sexual abuse and exploitation as a "cancer" in the UN system, pledged to urgently review the recommendations. “I express my profound regret that these children were betrayed by the very people sent to protect them,” he said in a statement.

CAR has been in turmoil since violence between mainly Muslim rebels and Christian-backed militias exploded following a 2013 coup. The nearly 11,000-strong UN mission, known by the acronym MINUSCA, began in 2014.

Voters are due to return to the polls Jan. 31 in a runoff election to determine the presidency.

According to Human Rights Watch, abuse by UN peacekeepers and staff is "neither unusual nor new," with incidents found since the 1990s, and possibly earlier, in missions around the world.

“With each new exposé, the UN re-asserts its policy of ‘zero tolerance for sexual exploitation and abuse.’ In practice, the UN’s zero tolerance policy amounts to zero justice for victims,” a campaign statement said.

According to Code Blue, “the crisis begins and always circles back to UN immunity, an important mechanism that has been misapplied in a way that was never intended.”

More from GlobalPost: How the Vatican’s alleged sex abusers hide and preach in South America (VIDEO)

Sherif Ahmed Elgebeily, a lecturer at the University of Hong Kong, writes in The Conversation that countries contributing soldiers to UN missions are responsible for investigating and prosecuting criminal conduct by their own soldiers.

“This means that, technically, the UN is powerless to bring about criminal charges against them,” Elgebeily writes. “It is not difficult, then, to imagine how and why states may be able to avoid potential embarrassment by simply ignoring the allegations.”

“Unfortunately, without serious overhaul of the peacekeeper system, the door remains open to sexual abuse by peacekeepers with a propensity for it: the risk of being punished by the UN or back home is simply too low," he writes.