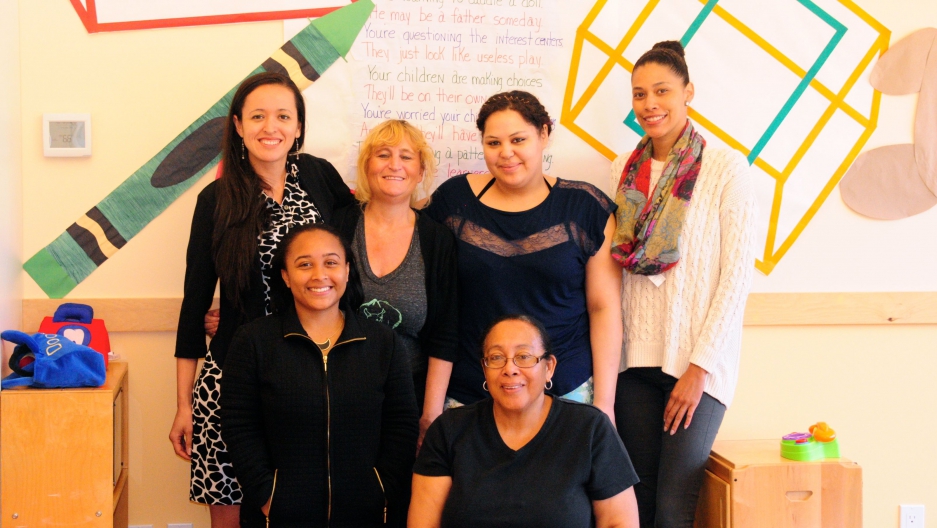 Staff at the Wuneechanunk Shinnecock Preschool.

Courtesy of the Wuneechanunk Shinnecock Preschool

Walk into the Wuneechanunk Preschool on a typical weekday morning and you’ll be greeted by the smell of burning sage and words unheard anywhere else in the world: Children singing in the Shinnecock language.

Yes, this is the only Shinnecock reservation, and it’s a small one, about 650 people. But the reason the sound of Shinnecock being spoken is so unusual is that there are no fluent speakers of Shinnecock left — haven’t been for more than a century. With New York City only an hour and a half drive west, the pressure to assimilate has always been intense for the Native Americans of Long Island. That's the topic of this week's World in Words podcast. 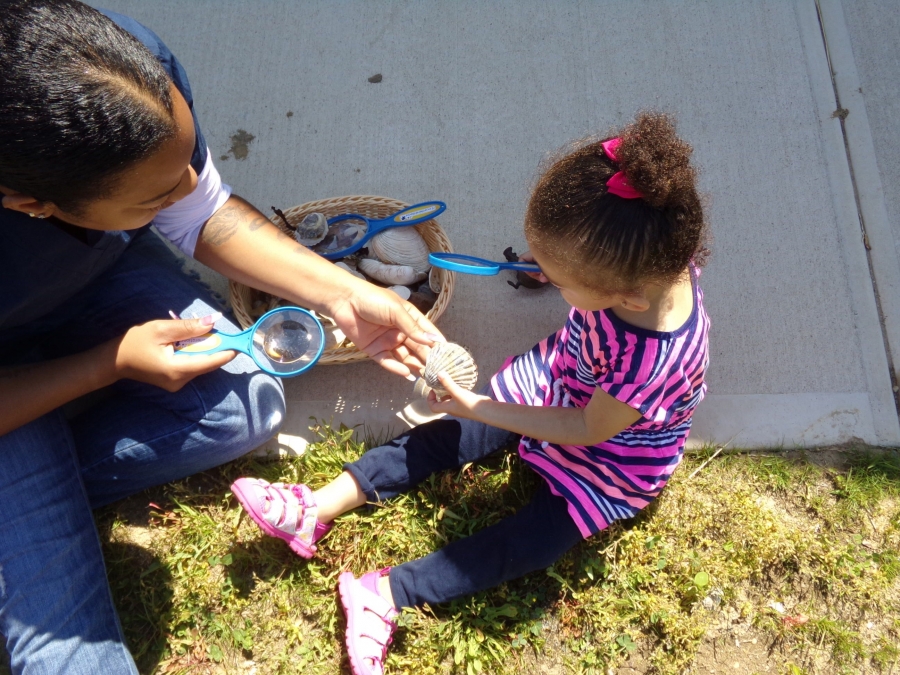 Courtesy of the Wuneechanunk Shinnecock Preschool

“It didn't seem like a reasonable thing to spend their time and effort on for their children if it wasn't going to be helpful for their future,” says Tina Tarrant, the tribe’s language researcher. “And people don't imagine that your language is going to disappear entirely. That's, like, such a strange concept that people don't think of it."

But a few years ago, Tarrant came up with an even stranger concept: bringing that vanished language back. Even as a child, she had collected Shinnecock words the way other kids collected baseball cards.

“Well I just always wondered why people weren't saying more things in our language, because we always talked about culture, we always did the songs and the dances, [but] we didn't use our own words to describe what it was we were doing.  So I started looking for the words, common phrases, nicknames — little bits and pieces.”

So when she had her own child, it made sense to give her a Shinnecock name: Tohanash. 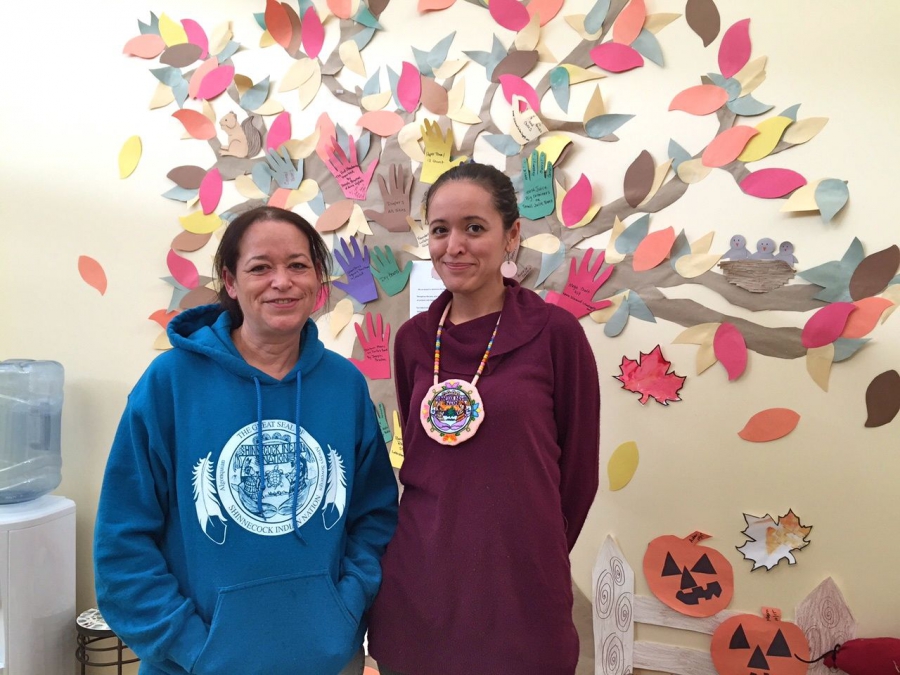 “She's named after a hawk who flew by my cousin's house, my mother's house and my house the morning that she was born,” Tarrant says, laughing at the recollection.

That was in the 1980s; hardly anyone on the reservation had a Shinnecock name back then. Tohanash is now 31 and she tells me that her generation was probably the first in three generations to have Algonquin names. “My mom made sure all six children had names in Shinnecock,” she adds.

Tarrant's decision was personal, she tells me, but it was also strategic.

“The reason for putting these unusual names in the local community was so that our words would continue to be spoken, and [tribe members] would have a firm understanding of at least one or two words in our language, even if it was their own names.”

It worked. Soon, other members were asking questions about Shinnecock words, wanting to give their children native names too. Tarrant saw hope for a larger revival of the language, and organized some workshops. But the challenges were intense. Aside from a handful of surviving words, there was only one written source for the Shinnecock language: a Bible translated by a native man, Cockenoe de Long Island, in the mid-1600s.

Tarrant had no institutional support in her effort. No money. Not even a college degree. It took years of effort to track the Bible down — on microfiche from a library in Scotland of all places. The tribe itself was too busy fighting a protracted battle for federal recognition to make language revival a priority. You’d think being surrounded by the uber-wealthy would give the Shinnecock an advantage over other tribes. Not the case.

Towering hedges stretch down Southampton’s streets for miles, obscuring the multi-million dollar homes of celebrities like Rachel Ray and Howard Stern. But unless you count lending their name to one of the world’s most exclusive golf clubs, the Shinnecock don’t share in that wealth.

In a place where the average house sells for almost $2 million, the average Shinnecock family makes barely $14,000 a year. And Tohanash says that’s not the only drawback to being an urban, East Coast tribe.

“There are a lot of issues ... relating to sales of the land or leases that were never made good on, so we lost a lot of territory. That has always been a challenge for us. Here we are, a small Native American community in the middle of the home of millionaires. So we have to take these millionaires to court for our land? It’s kind of an uphill battle for us.”

But in 2010, Tina’s scholarly goals dovetailed with the tribe’s judicial ones, when the Shinnecock became the 565th tribe to be recognized by the federal government. Two years later, the tribe voted to build a new pre-school and a radical concept was floated: to incorporate Shinnecock language into the curriculum. The school opened its doors this past summer with Tohanash as its manager. It was up to a team of seven people — Tohanash, her mother, and five teachers— to figure out how to bring Shinnecock back to life.

“Everybody was kind of in their beginning stages of learning of Algoquin, and we had to work with everybody on their different levels.” Tohanash recalls. They started with simple words that could be used in the classroom and translating popular songs such as Twinkle Twinkle Little Star.

Tohanash has since left her job at the school, but the language program continues. Clearly there’s a long way to go before kids are watching Dora the Explorer or thumbing through apps in Shinnecock. But people are starting to use native words around the reservation — beyond just “Hey, Tohanash!” Simple things like “good morning.”

“It’s very interesting,” Tohanash says. “People are owning it. They’re owning their identity, by just seeing these words on a regular basis and starting to use them with each other.”

It’s a big change from when Tina first launched her effort to reintroduce Shinnecock back in the '80s.

“The hardest thing is to feel like you don't know your own culture,” Tina admits.

Looking back at all the challenges to breathing life into the Shinnecock language, this hurdle  — the psychological barrier — may have been the biggest one. As Tohanash explains, putting aside “that bad feeling aside that this is not something that I know, it's something that you can learn,” is an ongoing process.

“It's OK that we weren't taught this growing up,” she says. “This is something that we're bringing back and we need to embrace.”

Owning your identity. Even in the Hamptons, you can’t put a price on that.

0:20: "We live on Long Island, which is very removed from what people think of as Native America."

1:10: "The hardest thing is to feel like you don't know your own culture."

1:40: This is first of several podcasts we'll be doing in 2016 about people trying to keep speaking or bring back their languages. We're planning to bring you stories from Kenya, Japan, the Netherlands, Canada and China, as well as several stories from the United States.

2:00 Is it always worth saving a language?

12:28 Two unrelated events: the American Dialect Society names the singular "they" its word of the year; David Bowie dies, age 69.

15:13 "I can switch accents within seconds of meeting somebody"

17:13 "The words started appearing out of nowhere, and I just couldn't control them."

15:44 "Always Crashing in the Same Car" by David Bowie