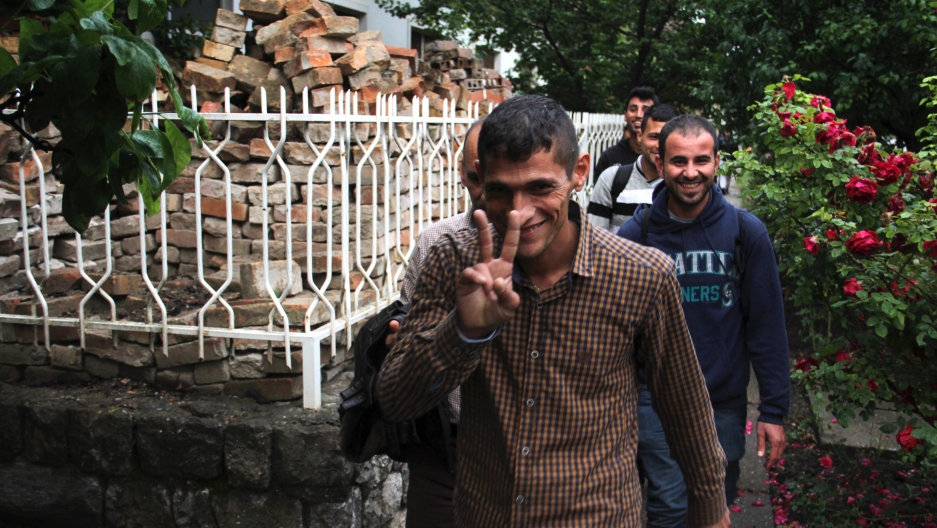 Young migrants and refugees walk through a town in northern Serbia toward the Hungarian border. There's a fear that young men like these might bring violence with them.

When Omar finished his geography degree he had a difficult decision to make: join the Syrian army or flee the country.

“The army is controlled by Bashar al-Assad,” he says, and for Omar, fighting for President Assad was not option.

“They push me to escape from Syria,” he says, “from the Syrian army.”

Syrian men face the draft when they turn 18. If they’re students, like Omar, they have a small reprieve until they finish their studies.

“[But] when I finish my degree, [I’m] not student anymore,” he says, adding that new graduates only have only few months before they’re conscripted and their names are flagged at checkpoints and border crossings.

So Omar (which is not his real name; we’ve changed it to protect his family’s identity) packed a few things and headed from his home in the government stronghold of Latakia to the Lebanese border. He made his way to the city of Tripoli, and then took a boat to Turkey, where he met his friend Karim (also not his real name).

Karim wasn’t lucky enough to attend university. He was drafted at age 18 and spent two years serving in the embattled city of Homs. But Karim didn’t want to fight for a dictator whose forces have killed tens of thousands of civilians, so he fled to Turkey, sneaking through a field and across the frontier.

He and Omar paid smugglers more than $1,000 each to take them by boat to the Greek island of Kos, and from there they headed north.

I met them outside a registration center in southern Croatia. They told me they want to go to Belgium, where Omar hopes to get his Masters degree. Both say they don’t want any part of the violence that has engulfed their country.

Most of the people outside the center are young men. And the image of thousands of young men from the Middle East and North Africa streaming toward Western Europe this fall has put people there on edge.

They’re afraid these refugees and migrants will bring with them violence and extremism. But the young men I speak to say they are leaving Syria, because they don’t want to take part in violence — and if they stay in Syria they may not have a choice.

Sami is from Aleppo, a city divided among Assad’s forces, opposition groups and ISIS.

He’s 18 so if he stayed in Syria he’d be forced to join Assad’s army. If he dodged the draft, he’d have to join another armed group, like the Free Syrian Army.

When the conflict started in Syria five years ago, the country’s army was a 300,000-strong force, but now some experts estimate it could be half that. In July, Assad admitted he’s short on manpower. And Sami says those forced to fight for him are now sent to the frontlines without proper training.

“Some people go to the army and they let them to go to fight without training,” he says. “They don’t know how to catch the weapon and fight.”

But Sami says he didn’t leave just to avoid conscription; it’s about having a chance at a future, he says, something that seems increasingly bleak in Syria.

“I want to have my future like everyone does,” Sami says. “I want to work and study and have a family. [I want to] work hard.”

For Omar and Karim, that future has started. Since we talked, they’ve both made it to Belgium and are in the process of claiming asylum.

“I will leave the camp and start my new life,” Omar wrote in a text message. “People here are kind with us.”