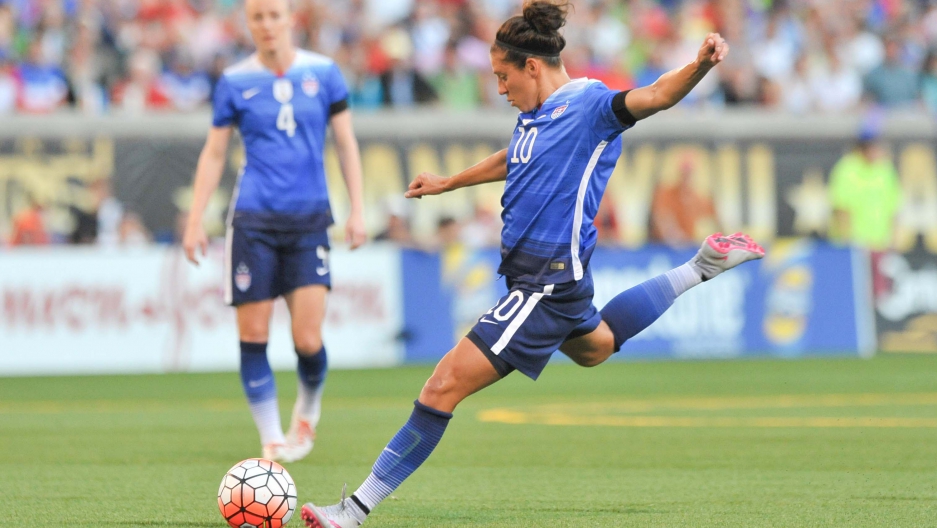 This was the first year US soccer player Carli Lloyd has been nominated as a candidate for FIFA’s Woman Player of the Year. And Monday night, she won.

The honor for the 33-year-old midfielder has been a long time coming, says Caitlin Fisher, who grew up playing with Lloyd on the US Regional Team and the Youth National Team. Fisher now works as part of a global network of female football activists, called Discover Football.

“I couldn’t be more proud right now of her and seeing where she’s come,” says Fisher. “I’ve seen her over the years, all the ups and downs that she’s gone through and people not believing in her but her constantly believing in herself. ... Just seeing her to get to this place of being the best in the world — really [I’m] so proud of her.”

Carli Lloyd was crucial to the US National Team winning this summer's Women’s World Cup. She scored six goals during the tournament, including three goals during the World Cup final against Japan, one of which was an incredible shot from halfway across the field.

She hasn’t always been the most consistent player, admits Fisher, but she manages to pull out incredible feats in clutch moments.

“She scored the game-winning goals in the 2008 Olympics in Beijing, in 2012 in London, to win the two gold medals, and then we saw her last summer at the World Cup so she has this tendency. But then are there are many games where she doesn’t appear, people don’t notice her at all. I think many of these kinds of dips that she’s had in her career have propelled her further and gotten her even higher and you see this drive in her," Fisher explains.

Part of that drive may come thanks to her long-time coach and trainer James Galanis. In her speech at the FIFA awards ceremony on Monday night, Lloyd thanked Galanis.

“We started this journey 13 years ago. You told me that I could become the best player in the world. It just took me the realization, now, that I could. Thank you for everything,” Lloyd said.

You competed against yesterday every single day until you reached the top @CarliLloyd. Tomorrow we start to compete against today. #5togo

2015 may have been Lloyd’s year, but Fisher is looking forward to seeing her play in the upcoming 2016 Olympics in Brazil as well.

“Really excited to see what she brings to Rio for the Olympics.”