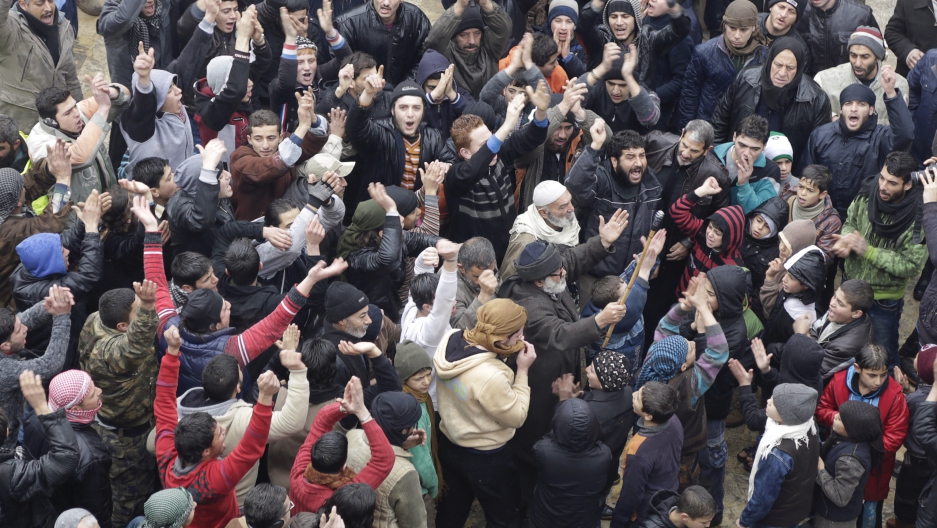 People shout slogans during a protest after Friday prayers, calling for the lifting of the siege of Madaya, in the rebel-controlled area of Maaret al-Numan town in Idlib province, Syria January 8, 2016.

About 30,000 people have been trapped in the city of Madaya, not far from the Syrian capital of Damascus, since last July.

According to residents and activists, Syrian and Hezbollah forces have besieged the city, put up checkpoints and kills anyone who tries to escape. They have also planted landmines in order to prevent residents from fleeing.

"The only food that entered the town was back in October,” says Dr. Ammar Ghanem, who is a member of the board of the Syrian American Medical Society.

He explains the food was “enough for a day or less.”

Since then, the residents have been scrambling to survive. They have resorted to eating boiled grass and leaves. They have been feeding infants just water and salt.

Note: This video may be disturbing for some viewers.

Just got sent this video from a Dr who says he filmed this today in his clinic in the besieged town of #Madaya Syria pic.twitter.com/yxTvSS9A4E

Ghanem, who has family in the area, tells the story of his cousin whose husband was arrested by the Syrian regime, tortured and killed. She was left with six children.

One day, as she was shopping in the market, she was picked up by government forces and taken to Madaya — which Ghanem calls an open air prison. Separated from her six children, she tried to escape. That didn't happen; she stepped on a landmine.

"Part of her right foot is being amputated and she had big injuries on the body," Ghanem says. "See the suffering?"

Since the grim pictures and videos of starving children started circulating online, the Syrian government has agreed to let aid into the town. The Red Cross has also said it would deliver food, medical supplies and blankets by Monday.

But Ghanem says time is limited. He spoke with residents this morning and says nothing has changed. "More delay, more people are [going to die]," he says.

1/2 Our priority with @SYRedCrescent is to get access to #Madaya, Foua, Kifraya and Zabadani and bring much needed assistance. #SyriaCrisis

He's also skeptical of the help in general. He says that residents have been told several times over the past few months that they will receive food and supplies only to be ignored. "They fear that this is another lie, just like before," he says.

Adding to that, he says, is the worry that this will be a one-time gesture and that the town and its people will be forgotten once they receive some food.

"We need a long term solution, not just one time you go in, give them some food and everybody forgets about them," he says.

Ghanem says seeing the images and videos from Madaya makes him "lose trust in humanity."

"I don't know why these people are being punished like this," he says. "I feel sorry when I see the images of children, innocent children [who] don't know what's going on around them."