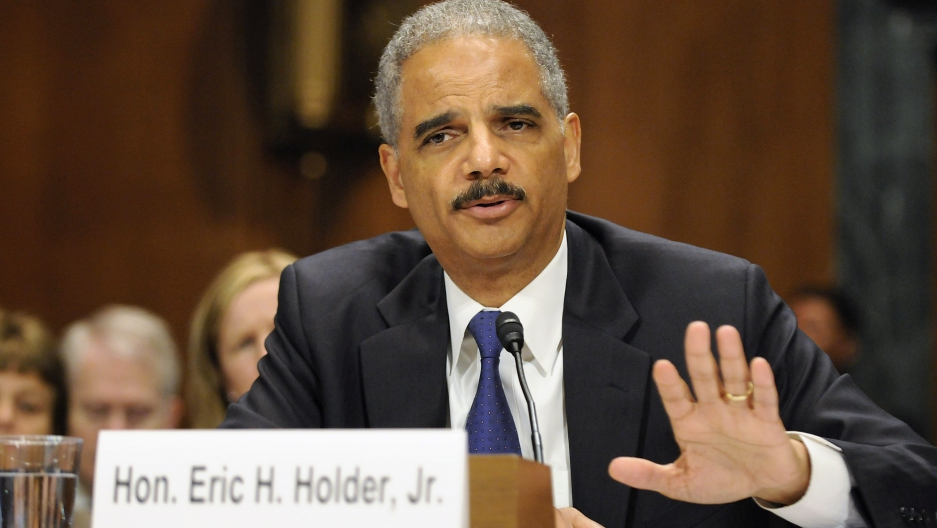 From gun control to the financial crisis to defending his legacy: We spoke with former Attorney General Eric Holder at length. He says he fully supports Obama's gun control actions of the past week, and that if the public could see the images of some of the damage caused by gun violence, like those of Sandy Hook, more action would be demanded. While Holder is now back in the private sector, he hopes to continue to be a force for change in the areas that he spent so much time defending during his tenure as Attorney General. Below is the transcript.

Eric Holder: The President was pretty clear that there’s a need for additional people at ATF in order to effectuate the changes that he wants to bring about. And if you look at the way in which the ATF has been treated, it’s been a death by attrition – both in terms of the numbers of people and relatively small increases that have occurred and then the unwillingness by the Senate in this Administration and the prior administration as well to confirm somebody.  So both at the leadership level and in terms of the number of people brought into ATF in order to help effectuate these changes, I hope Congress will cooperate.

John Hockenberry: Gun control and second amendment issues were conflict points within DOJ and congress certainly in Washington. Another is voting rights whether we’re talking about the Supreme Court decision or talking about the successful prosecutions and successful cases that you mounted at DOJ. Where do you think the voting rights act in headed?

Holder: My hope would be that Congress would take it up and in essence make the voting rights act consistent with the decision – I think the wrongly decided decision – in Shelby County by the Supreme Court. There is a need for a voting rights act that will reach the entirety of the United States. Before I left we circulated up on the hill a proposal – a mechanism by which all states could be held accountable – all jurisdictions within the country – could be held accountable based on their past actions over the previous ten years.

My primary concern though is that we’re going to see Congress not act at all. This is something that has become highly politicized and to be frank I think those on the Republican side of the aisle see a benefit to a lot of the things that have been brought out in various states like photo IDs. A whole variety of changes that I think under the prior voting rights act the justice department might have opposed

Hockenberry: When would you say the impetus happened for you to think about sentencing reform in the United States as a mission and something you did really manage to make serious headway once when you were AG?

Hockenberry: Do you think some of this was driven by race particularly as we see it revealed now that the patterns of incarceration were so easily voted in partly because there was an implicit understanding that they would bear more directly on African American communities?

Holder: Well I’m not sure that race drove congress to put in place those rather draconian drug sentencing laws.  But I certainly now that as we look back on it now and see who was disproportionally impacted by this that there certainly was a racial component to it, but there’s no question that the impact of those laws is something that I think was essentially unfair.

Hockenberry: When you came into office and when the President came into office, certainly the big story was the financial crisis, and I’m wondering if your mission or your agenda in approaching the job of attorney general changed at all when you understood that the business of governing and the business of certainly the white house was going to be in dealing with the financial crisis.

Holder: No, not really. I mean, the financial crisis was something that I knew we had to deal with. I remember we had a cabinet meeting early on where Larry Summers was laying out the depth of the problem and I remember a chart that we were given that compared where we were in 2009 to 1929. But that didn’t really have an impact on our enforcement efforts at the Justice Department to the extent that we found issues that warranted criminal or civil resolutions. I think we were pretty effective in that regard.

Hockenberry: Do you think there was a conscious decision made to focus largely on the civil side rather than the criminal side in dealing with punishments to the financial industry post crisis.

Holder: No. I think what you’re getting at in a polite way is the criticism that has been raised that we decided to give individuals in banks passes as opposed to prosecuting them, and I think that’s simply inconsistent with the facts. What you have to understand is that these are the kinds of cases – if you can bring them – that would be in some ways career-defining in a positive way for these prosecutors, for these U.S. attorneys. And the notion that we somehow turned our backs on cases that we could have made is just not consistent with the facts. We tried extremely hard to make criminal cases both against institutions and individuals. But given the diffuse way in which the decision making occurs, given the state of the laws we had, the cases simply were not able to be made, and I think that the numbers we got in terms of fines and penalties from the banks, those were extremely effective mechanisms and good deals on behalf of the American people.

Hockenberry: But if you’re looking at it from the standpoint of one of these bankers like Jaime Diamond it’s a no-brainer: jail or pay some money to Eric Holder? Yeah they’re going to take this deal.

Holder:  A lot of people who are critical here have never been prosecutors, you’ve got to reach the highest standard of the law: beyond a reasonable doubt. You have to bring a successful prosecution, and to the extent that we could have done that we would have brought those cases. But we also cannot bring cases simply because we feel that people have done wrong. We have to be able to prove that they have done wrong.

Hockenberry: It was quite a ride – you and President Obama there in the administration for two terms. Did you and the President depart as friends?

Holder: Oh absolutely. It’s an interesting thing. We were friends before I started.  One thing I think people should understand is he’s a good lawyer and understands the need for an independent justice department, and he never really interfered in some of the decisions that I made.  I’m sure that now that I’ve left and once he leaves office, there will be things that he’ll want to discuss with me and say, “What the hell were you doing Eric? Why’d you do that?” There are things I’m sure that he didn’t necessarily agree with or understand and so I think there’s going to be a conversation over drinks that the two of us will have about my time as AG.

Hockenberry: Back to the gun control announcement from the president this week. He got emotional there, and there’s been much said about that. Certainly it’s not hard to get emotional thinking about what happened at Sandy Hook and those little kids who were killed but people in the White House have access to information and images and things that others of us don’t. Have you seen the pictures of what happened in that room where all those kids were killed?

Holder: It was the worst day I had as Attorney General. I went up to Sandy Hook a few days after the massacre. People say “tragic incident.” It wasn’t a tragic incident. It was a massacre. And I met with the first responders and the crime scene search officers and they took me around, I looked at the pictures. If the American people had access to those pictures, if the American people had seen those pictures, the calls for reasonable gun safety measures would have been passed. If members of Congress perhaps had a chance to see those pictures and sees what happened to those little angels I think we would’ve seen a different result. I came out of that tour that I took of the school, and they lined up the first responders and the crime scene search officers – grizzled police folks – and everybody was crying. They were crying. I was crying. It was without question the worst day that I had as Attorney General and maybe the worst day in my professional life.

Hockenberry: So those images, you’re convinced, would have the impact of the pictures of Emmett Till that changed America’s civil rights.

Holder: I don’t think there’s any question about that. To see the bodies of these little angels, to see their classroom. Where you have this juxtaposition of all this blood on the walls and the little posters that they put up, like “what I want to do this year.” You know how little kids transpose letters and, you know, put a “k” facing the other way, and Denise or something , 6 years old, and misspells her name.  And to see the innocence that created those pictures about what they wanted to do in first grade that year juxtaposed with the scene of carnage that you saw that was wreaked by Lanza, it was something that haunts me, that stays with me even now. I mean, as we’re talking about it I can bring up the images in my mind too easily.