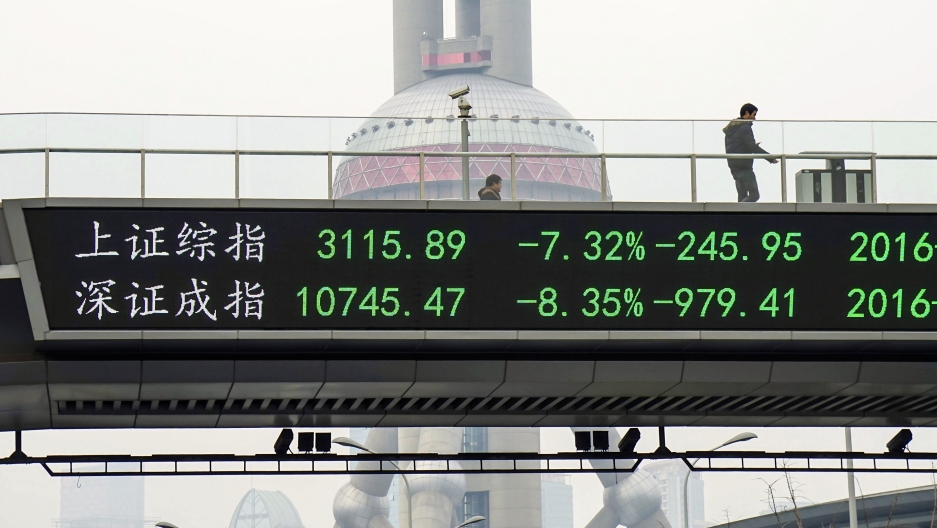 A man stands next to an electronic board in Shanghai showing the benchmark stock indices for Shanghai and Shenzhen, after the new circuit breaker mechanism suspended Thursday’s stock trading on the market in Shanghai, China, on January 7, 2016.

It’s only one week into 2016 and twice now, massive sell-offs of Chinese stocks have triggered a new circuit breaker meant to prevent a market free fall there. This has sent shock waves to markets beyond China’s borders.

“It is not,” says Bill Bishop, author of the influential Sinocism China Newsletter. “Even if it were, it wouldn’t be caused by the Chinese stock market.”

China’s stock market is easy to understand, Bishop says. It works like a casino. There are winners. There are losers. Lady luck is in charge.

“The markets in China have never really been related to the economy itself,” Bishop says. The market has only been around for about 25 years. It has relatively few investors.

Most people in China are also well aware that stocks are bets and winnings need to be snatched off the table quickly, before they disappear.

Bishop says some Chinese investors learned the hard way, when the market crashed and erased around two-thirds of its value in 2007. Then it crashed again last summer.

“What’s happened over the last couple of days is more a set of policy errors on the Chinese government, [rather] than something more fundamental going on,” he says.

The plunge in Chinese stocks might seem panicky and sudden, but the cooling off has been long in coming.

“China’s slowdown certainly wasn’t sudden,” says Robert Kahn, a senior fellow for international economics with the Council on Foreign Relations. “It’s important to remember that China, over the last several decades has grown in excess of 10 percent per year and has accomplished one of the most impressive economic transitions from an emerging market to a major economic power.”

“We also knew that imbalances were building up, a lot of investment maybe was being used poorly,” says Kahn. “There was too much debt in manufacturing, in real estate, and the like.”

Kahn says the Chinese government needs to resolve those problems. In the meantime, Chinese investors are fleeing their stock market. But all that money has to go somewhere.

“I think what’s been most difficult for the Chinese has been where to put it,” says Martin Schulz, a portfolio manager with the PNC International Equity Fund.

He says smaller Chinese investors have turned to safer investments, like gold and Chinese real estate.

“Historically, it was within China itself. Because particularly the average investor couldn’t just take his money and move it out of the country,” says Schulz.

In the past year or so, the large-scale Chinese investors Mermelstein works with have more than doubled their stakes in US real estate.

As the Chinese economy opens up, individual Chinese investors are also pumping a lot of money into the American housing market. The average price paid by a Chinese buyer for a single family home last year: $831,000. Most of those deals were cash with California being the preferred place to buy.

“It’s all about familiarity,” says Chovanec. “When you see Chinese tour groups, very frequently they’re the first time traveling outside of China, they move in a pack. And Chinese investors also move in a pack.”

Chovanec says as Chinese investors get more sophisticated though, they’ll expand the places where they purchase.

“I heard maybe about a year ago that Detroit had become a hot place, says Chovanec. “There were some tours being organized for Chinese investors. They go on these trips, and then, you know, it’s hot because it’s where they are. So it’s where they’ve been taken.”

Chinese investors could be taking a lot more American real estate tours. If the Chinese stock market continues to fall, homes in cities like Detroit could increasingly look like a decent investment.