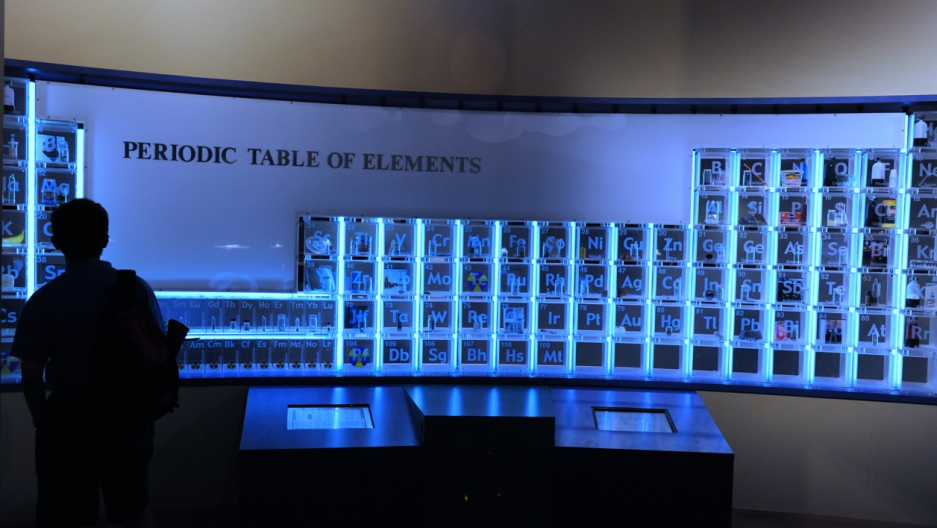 The periodic table of elements at the Houston Museum of Natural Science, 2010.Photo by Ed Uthman.
Share

Sorry, kids, memorizing the periodic table just got a little harder. And, grown-up science nerds of the world, it's time to throw out your old textbooks and tear down your shower curtains.

That's because the International Union of Pure and Applied Chemistry (IUPAC) just added four new elements to the periodic table. The announcement came Dec. 30, while some of us were preparing for New Year's Eve by washing our sets of now out-of-date periodic table shot glasses.

The newly declared elements fill out the remaining four spots on the table's seventh period.

"The chemistry community is eager to see its most cherished table finally being completed down to the seventh row," Professor Jan Reedijk, president of the Inorganic Chemistry Division of IUPAC, said in a statement. "IUPAC has now initiated the process of formalizing names and symbols for these elements temporarily named as ununtrium (Uut or element 113), ununpentium (Uup, element 115), ununseptium (Uus, element 117), and ununoctium (Uuo, element 118)."

Elements 113, 115, 117 and 118 are all considered "superheavy" elements, meaning they have more than 104 protons. They are synthesized in laboratories using particle accelerators to slam nuclei together, and they have very short existences. Element 113, for example, lasted less than a thousandth of a second.

Credit for element 113 goes to a team based at the RIKEN Nishina Center for Accelerator-Based Science in Japan. It's the first element on the periodic table discovered in the Asia, according to a statement from the group.

Now that the elements have been formally accepted to the periodic table, the next step is for the teams to recommend permanent names and symbols for their discoveries. And there are some rules for them to follow.

"New elements can be named after a mythological concept, a mineral, a place or country, a property or a scientist," the IUPAC explains. If the IUPAC's Inorganic Chemistry Division accepts the teams' proposals, "the names and two-letter symbols will be presented for public review for five months, before the highest body of IUPAC, the Council, will make a final decision on the names of these new chemical elements and their two-letter symbols and their introduction into the Periodic Table of the Elements."

So be patient — there will be new shower curtains, mugs, T-shirts and plenty of other periodic table gear, but not right away.