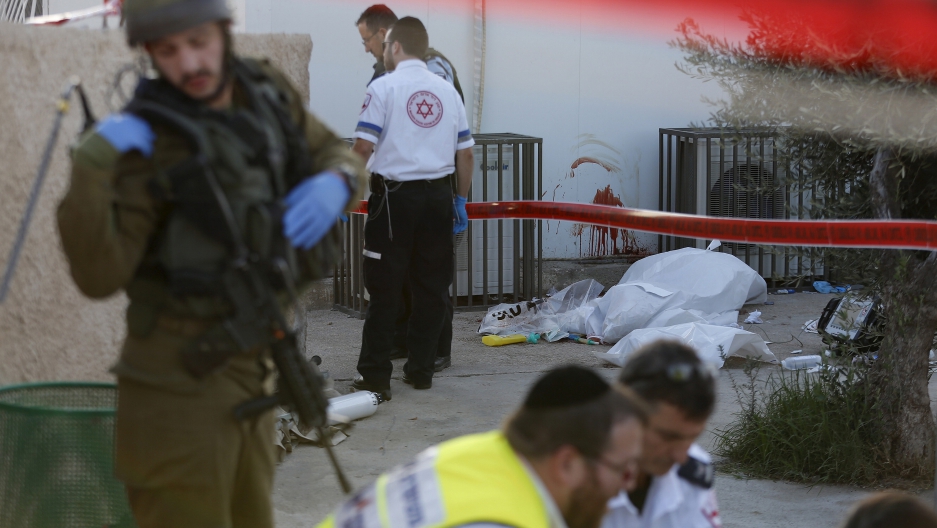 An Israeli soldier and medics gather around the body of an Israeli soldier who was stabbed and killed by a Palestinian at a gas station before the Palestinian was shot dead by soldiers near the West Bank village of Khirbit Al-Misbah, between Jerusalem and Tel Aviv, on Nov. 23, 2015.
Credit: Ammar Awad
Share

​JERUSALEM — It's been one of the worst of times for liberal and moderate Israelis — and, some are warning, for the future of Israeli society.

"We must ask ourselves," said Tel Aviv University professor of history Aviad Kleinberg, speaking on Israeli radio Dec. 26, "Are the values of equality and justice, of basic humanity that does not distinguish between human beings, still the norm in our society?"

Kleinberg was responding to a video broadcast on Israeli TV showing celebrations at a Jewish wedding that included knives, rifles, and pistols. In the heat of the "festivities," at least one of the revelers could be seen ecstatically stabbing a photo of Palestinian infant Ali Dawabsha, who was burned to death along with his parents when their home in the West Bank village of Duma was firebombed in July.

Ali's 4-year-old brother Ahmed was the only survivor of the arson attack, and is still being treated in Israeli hospitals. Several suspects, all of them young, radical Jewish settlers, are in the custody of Israeli security forces. Indictments are expected soon.

"Shocking," responded Prime Minister Benjamin Netanyahu at a cabinet meeting. He said the video exposed “the real face of a group that poses danger to Israeli society and security.” Yair Lapid, head of the opposition Yesh Atid party, said that the participants "are not Jews and they must be fought against, same as Hamas or Hezbollah.” A mourner reacts next to the body of 18-month-old Palestinian baby Ali Dawabsheh on July 31, 2015.

Nearly 100 more alleged Orthodox Jewish extremists are currently on the security services' radar — either being questioned, facing legal action, in jail, or under restriction orders, according to a list maintained by a group of their supporters on Facebook.

Leaders of the settler movement have repeatedly tried to distance themselves from young Jewish terrorists, contending that they are a small fringe group. Some settler leaders have taken an apologist position, explaining that these youths are misguided, disaffected dropouts who have been radicalized in response to Palestinian terrorism.

But others have accused Israel's political and religious leadership of abetting the violence, and using it to advance extreme new policies.

Reflecting on events of the past few months, columnist Anshel Pfeffer wrote in a column for the liberal daily Haaretz that the celebrations, like the horrific murders that preceded them, are "the inevitable result of right-wing ministers who incite to violence, of MKs calling for the Supreme Court to be demolished with bulldozers, of MKs calling Palestinians 'animals,’ of ordinary people beating foreigners in bus stations while screaming 'death to Arabs!,’ of thugs looking for Arabs to beat up in the streets of Jerusalem — and seeing they can get away with it."

Some contend that these radicalized youth are the natural consequence of Israel's ongoing occupation of the West Bank.

"This is the result of our failure to recognize how the occupation of another nation has ultimately eaten away at our moral values," said Hagai Elad, director of Btselem, an Israeli nonprofit that documents human rights abuses in the occupied territories. "It’s much too easy to be shocked at these vile creatures from another world. They’re not that far away.”

"The country's democratic ideals are being tested," warned Professor Naomi Chazan, former deputy speaker of the Knesset, Israel’s parliament, and dean of the School of Government and Society at the Academic College of Tel-Aviv-Yaffo. Masked Palestinian girls stand in front of a picture of Jerusalem's Dome of the Rock during a Hamas women's rally in Gaza City December 6, 2015 in support of Palestinian stabbing attacks against Israelis.

Israelis, Chazan says, are deeply divided over how to deal with the ongoing conflict with the Palestinians. This rift has been intensified by the country's growing international isolation — which brings with it a heightened sense of vulnerability — and pervasive dread over seemingly unstoppable terror.

Israelis have developed a sense of siege, Chazan says. "The world — outside Israel and within its boundaries — is thus divided neatly into 'us' and 'them': supporters and detractors, friends and enemies, those who are with us and those who are against us."

A proposed law restricting non-governmental organizations is the latest flashpoint.

Earlier this week, the Ministerial Committee for Legislation unanimously approved a cabinet-sponsored bill requiring NGOs to declare funding from foreign countries and to note that fact on all official documents to civil servants. Representatives of these NGOs will be required to wear identification whenever they attend sessions in the Knesset.

Supporters of the bill argue that when European countries fund NGOs that criticize the government, they are by-passing the usual diplomatic channels to advance their own foreign policy interests.

Opponents say the bill is little more than an attack on the political left, which is disproportionately affected since they are the ones receiving funding from foreign governments. Groups on the right also receive foreign funds, but mostly from private donors.

More from GlobalPost: How to spot a terrorist, according to the Israeli police (VIDEO)

The law still has to go through the Knesset, where it may not pass, but response this week has been loud and strident. Opposition leader Isaac Herzog of the Zionist Camp party tweeted that the government's support for the law marked “a black day for civil liberties, associations, and Israeli thought."

Facebook and Twitter feeds filled with accusations of fascism, Nazism, and McCarthyism, and with pictures of left-wing activists wearing yellow Stars of David — like the ones the Nazis forced the Jews to wear — with the word "leftist" inside. Others noted that Russian President Vladimir Putin recently pushed through similar legislation to crack down on NGOs in Moscow. Even the term "Judeo-ISIS" has been bandied about in some radical leftist circles.

A right-wing nationalist group called Im Tirzu has actively supported the proposed legislation. Their name means "If you will it," a well-known quote from founder of political Zionism Theodore Herzl.

According to a Jerusalem district court judge, the group shares a "common denominator with certain principles of fascism."

But this hasn't kept Im Tirzu down. Playing on valid fears of terror, the organization recently released a video accusing Israeli human rights activists and organizations of abetting Palestinian violence.

The 68-second video opens with staged — but very dramatic — footage of a man, stereotypically identifiable as Palestinian, drawing a knife on the street, about to plunge it into innocent passersby. The video then specifically identifies four NGO activists.

"They live here with us and they are implants," says an off-screen narrator. "While we fight terror, they fight us."

Reminiscent of virulent anti-abortion websites in the United States that courts have blocked, the video’s message is clear: These four people, along with everyone who works in or supports their organizations, are traitors.

In a country where similar rhetoric helped create the atmosphere that led to the assassination of Prime Minister Yitzhak Rabin by a right-wing nationalist in 1995, concerns that the incitement could lead to more violence are not unfounded.

More from GlobalPost: In Jerusalem, Jews and Palestinians share an intifada frame of mind

The ultra-nationalist surge, says Chazan, "is part of a systematic process of democratic regression. It focuses on any divergence from what is fast-emerging as a dominant, ethnically-driven, exclusivist, monolithic worldview."

In the face of desperation and dread, many find comfort in ultra-nationalism and xenophobia. And the politicians know it.

The fear "allows the present leadership to shirk responsibility for Israel's precarious situation,” Chazan says, “and, by shifting the burden to those who disapprove of its course, entrench their hold on the reins of power.”