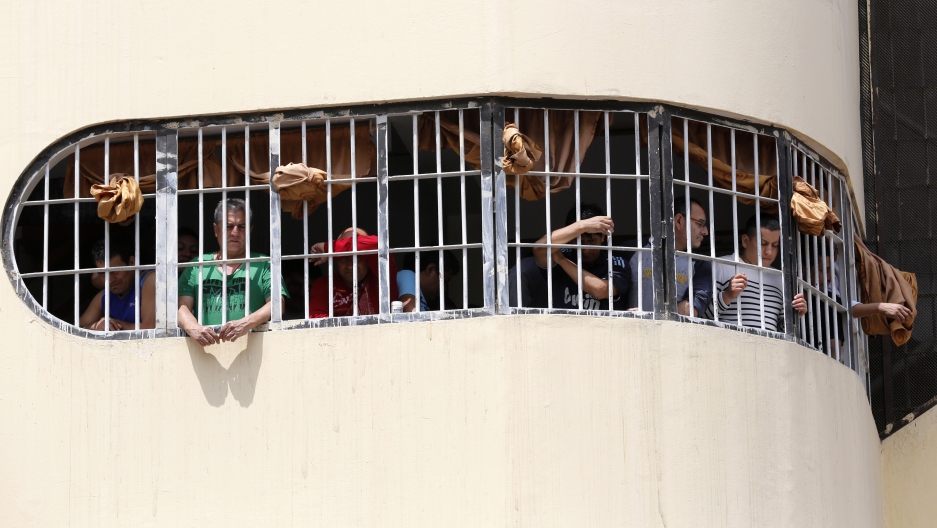 LIMA, Peru — Aggressively disputing her parking violation with a traffic cop may have been the worst decision Silvana Buscaglia Zapler ever made.

The incident at the international airport of the Peruvian capital, Lima, caught on camera below, has become a cause célèbre in Peru.

In it, Buscaglia Zapler can be seen initiating a shoving match with the officer, slapping off his hat and telling other cops to “get away from my car.” She then attempts to drive off despite two more policemen standing in her way.

Three days later, after a lightning-quick trial and plea bargain, she had been sentenced to six years and eight months in jail for “resisting authority and aggravated violence against a police officer” — with no right of appeal.

Here's full video of the altercation:

Buscaglia Zapler, 48, variously described by Peruvian media as a businesswoman and a Jiu-Jitsu instructor, is the most high profile target of a new law here aimed at speeding up the country’s creaking — and frequently corrupt — criminal justice system.

Approved by President Ollanta Humala in September, Decree 1194 requires prosecutors to request a streamlined trial process for any defendants caught committing “flagrant crimes,” in which the evidence of guilt is overwhelming.

That involves sentencing within a maximum of 72 hours, including a 24-hour period for police and prosecutors to investigate the alleged crime and gather evidence. Defendants can oppose the streamlining but the judge makes the final decision.

The alternative, traditional justice process in Peru typically takes months or even years, with trials often held behind closed doors and evidence submitted on paper.

Judges here also frequently dismiss charges or release defendants on bail despite what appears to be incontrovertible evidence of either guilt or a flight risk, triggering suspicions of bribes or accusations of ineptitude.

More from GlobalPost: Meet the Peruvian Rasta behind a landmark case for the right to grow weed

Decree 1194 was meant to address that problem while also responding to widespread public fears about Peru’s growing levels of violent crime.

It can be applied to any alleged crime but is principally aimed at drunk drivers, rogue fathers failing to pay child support, and violent offenders, particularly those who attack police officers, a crime punishable with up to 12 years behind bars.

In the first month since it came into effect, 1,098 people have been sentenced to jail terms in trials that have lasted as little as 20 minutes, according to Peruvian newspaper La Republica.

For many here who are fed up with Peru’s violent crimewave and the frequent inability of the police and courts to respond, the decree is seen as a blessing. Sympathizing with the likes of Buscaglia Zapler is the last thing on their minds.

Outspoken conservative commentator Beto Ortiz even tweeted: “This cretin does this in the US and before she’s finished her slap she gets 7 bullets in the head for being a jerk.”

Radio host and lawyer Roberto Miranda blamed Buscaglia Zapler’s attorney, tweeting that he had “negotiated badly” by accepting a plea bargain that precludes the right of appeal.

Yet there have been voices of dissent. Some wondered whether the defense had adequate time to prepare. Others, while condemning Buscaglia Zapler’s conduct, noted that the police should blame their own corruption and ineptitude when citizens fail to respect them.

“It appears that an arrogant, posh woman had a hysterical reaction against a mestizo police officer who was fining her and out came the racist scourge,” he wrote in a newspaper column.

“Her attitude is appalling, but condemning her to six years in jail is madness. Did she attack with a weapon? Did she threaten anyone’s life? Is she a repeat offender?”

“Did it merit a sanction? Yes, but a night in the cells to recover [her] common sense, a stiff fine and a couple of months of community service.”