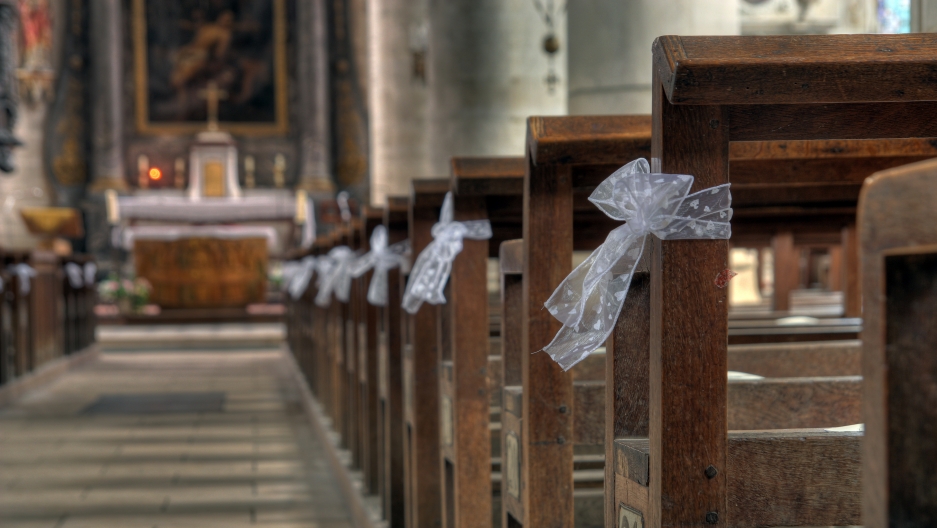 The church of Eclaron prepared for a wedding.

However, child marriage isn't only a problem in the developing world, it's also an issue in the US. Thousands of children have been married in the US in recent years. Between 2000 and 2010, 3,853 children were married in New York state alone.

But tracking child marriages in the US can be difficult, says Fraidy Reiss, the executive director of Unchained at Last, a nonprofit that helps women and girls leave or avoid arranged and forced marriages. At the present moment, she says there isn’t reliable data on child marriages for 48 out of 50 states.

“We still don’t have a very good sense of how common child marriage is here in the United States,” Reiss says. “The fact is, though, while 18 is the minimum marriage age in most US states, every US state allows exceptions under which children under age 18 can get married.”

In most US states, guardians can provide parental consent in order to allow children under the age of 18 to enter into a legal marriage. But Reiss says that “consent” can also be an issue.

“Parental consent is a common exception [to the law], and that typically lowers the marriage age to age 16,” she says. “But the problem with parental consent is that there is no process in place to ensure that it’s not actually parental coercion. Even in a situation where a girl is sobbing openly and doesn’t want this marriage, her parents can sign the marriage license application and force her into a marriage without the clerk having any authority to intervene.”

When it comes to marriage exceptions for persons under the age of 18, many US states also allow for “judicial approval,” Reiss says.

“If a judge approves the marriage, that lowers the age even more,” she says. “In many states, there is no minimum age below which a judge is no longer allowed to approve a marriage.”

Reiss says she has seen this issue first hand — her group found one case where a 10-year-old boy was legally married to an 18-year-old woman in New Jersey back in 2006.

“It’s really at a judge’s discretion,” she says. “We have found that judges have been allowing marriages often at ages or with age differences that would be considered statutory rape under state law.”

According to an analysis by Unchained at Last, an overwhelming majority of child marriages in the United States involve young girls under the age of 18 and adult men.

And there appears to be an increasing number of forced marriages across the US among immigrant communities, according to a survey by the Tahirih Justice Center, a nonprofit that provides legal services, advocacy, and education to immigrant women and girls fleeing violence. The survey found that US immigrant communities that represent 56 countries—including India, Pakistan, Bangladesh, Mexico, the Philippines, Yemen, Afghanistan, and Somalia—have participated in forced marriages.

“The Tahirih survey focused on immigrant communities, but it did also find that this happening in so-called ‘American communities’ and ‘American families,’ and we have seen that also at Unchained at Last,” says Reiss. “This is not only an immigrant issue.”

Reiss says that forced marriages can be seen in a variety of religious, cultural, and ethnic groups across the United States, which is one more reason she believes the law needs to be changed.

“We need to put a stop to this, and ending those exceptions that allow children to get married is a no brainer,” she says.

Unchained at Last is fighting to have all 50 states adopt legislation that would change the marriage age to 18 with no or very few exceptions—including pregnancy.

“A pregnancy exception is not one that I consider to be reasonable,” says Reiss. “Pregnancy exceptions have been found to be bad public policy, and states in fact have been moving away from those. Girls who are pregnant need as much protection from forced marriage, if not more, than any other girl.”

Unchained at Last will likely face a great deal of push back from religious communities who  argue that a baby should be born to married couples—regardless of the age of the parents. But Reiss holds firm against her critics.

“For a long time there’s been this push to have children married within wedlock based on the assumption that that’s in the best interest of mother and child, but that’s been proven not to be true,” she says.