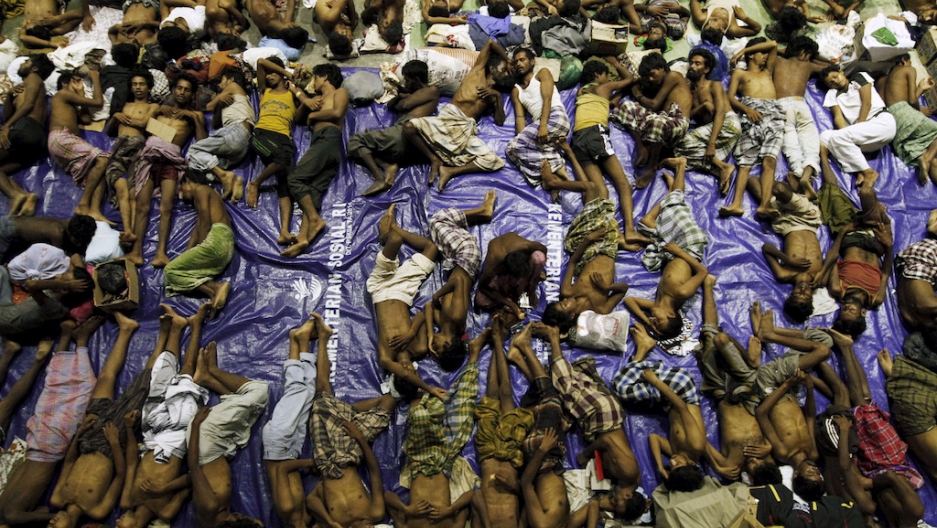 Migrants believed to be Rohingya rest inside a shelter after being rescued from boats in Indonesia's Aceh province, May 11, 2015.
Credit: Roni Bintang
Share

BANGKOK, Thailand — Southeast Asia is bracing for a new “sailing season.” It’s a benign-sounding expression for one of the region’s most perilous annual events.

Starting late in the year, when monsoons recede and seas grow calmer, tens of thousands of Rohingya Muslims in Myanmar make a grim decision. They choose to sail eastward on creaky boats run by callous smuggling syndicates. Their goal: securing underground work in Thailand or Malaysia, even though both nations warn them to stay away.

Many die at sea. Those who do not are often swept into mafia-run human trafficking rings infamous for rape, extortion and burying those who can’t pay ransoms in jungle graves.

But the risk is deemed worth it among many Rohingya who, in recent years, have decided the danger is preferable to remaining in their homeland. Rohingya and Bangladeshi migrants wait on board a fishing boat off the coast of Julok, in Indonesia's Aceh province.

In Myanmar, the Rohingya have been subjected to ethnic cleansing, local mob massacres and a government that derides practically all 1 million Rohingya inhabitants as invaders from Bangladesh. More than 140,000 are confined to bleak government-run camps after pogroms, stoked by radical Buddhist monks, purged them from their homes.

As the West copes with a highly politicized influx of families fleeing Syria and Iraq, this lesser-known Asian crisis still simmers.

It is much smaller in scale: roughly 100,000 have fled the Rohingya’s native Rakhine State and neighboring Bangladesh by sea in recent years, according to the United Nations, while Syria has produced a staggering 4.3 million refugees.

But there are parallel horrors faced by both sets of escapees — from starvation and abuse by people smugglers to the wrath of citizens in their destination countries.

“It’s been happening for years but, unfortunately, the world never paid much attention,” says Khin Maung Myint, a Rohingya activist. “It’s an unbearable situation. They’re forced to flee their ancestral lands.” He compared some of Myanmar’s most abusive security forces to “Nazi Gestapo.”

Monsoons over the Rohingya exodus route, the Bay of Bengal, have only recently subsided. So far, at least 1,000 are known to have sailed through these waters since September, according to Vivian Tan, a spokesperson for the UN refugee agency, UNHCR.

More are expected to flee in coming months.

“[The Rohingya] are, if you like, the baby seals of the Southeast Asian Islamic world.”

Myanmar is a dazzlingly diverse country where ethnic minorities make up more than 30 percent of the population. But it is economically and militarily dominated by majority Buddhist Bamar. The nation’s all-powerful army has a long history of grinding down minorities through jungle warfare.

In response, practically every sizeable ethnic group has assembled an armed guerrilla defense force — except for the Rohingya. It’s no coincidence that, in recent years at least, they have suffered more than any other group in Myanmar.

“They’re a target of many people’s affection,” says Anthony Davis, a Bangkok-based security analyst with Jane’s Defence Weekly. “They are, if you like, the baby seals of the Southeast Asian Islamic world whose main claim to fame is getting clubbed over the head on a regular basis.”

Some dream of assembling a force to defend the vulnerable Rohingya. Islamic radicals in the Southeast Asia have repeatedly expressed a desire to help them fend off mistreatment.

But to date, Davis says, vows to mount an armed struggle have yet to come to anything.

“There’s no evidence of that happening,” he says. “Because the baby seals basically want out and are looking for jobs in Malaysia. They’re not looking to raise the black flag of jihadist struggle.” A Rohingya migrant who arrived in Indonesia by boat looks out the window of a temporary shelter in Aceh Timur.

That hasn’t stopped Myanmar’s government and even Western media from attempting to connect the Rohingya to terrorism. Most of these warnings cite the Rohingya Solidarity Organization, a tiny armed group set up in the 1980s that is now “essentially defunct,” according to the International Crisis Group.

There is no armed wing “worth its salt” within the Rohingya diaspora, says Sidney Jones, an expert on Southeast Asian extremism with the Institute for Policy Analysis of Conflict in Jakarta. She warns that “if there was ever an extremist operation that Indonesian jihadis could join in Myanmar, it would be off like a flash” but “it’s not there now.”

That leaves Myanmar’s league of famous anti-tyranny dissidents, led by the idolized Aung San Suu Kyi, to demand better treatment for the Rohingya.

Her party, the National League for Democracy, swept historic November elections and will dominate a new government when it takes power in March 2016. Cheered on by the White House, they are the self-proclaimed voice of the oppressed citizenry and have promised to heal the bloody rifts between minorities and the government.

That pledge, however, may not extend to the Rohingya. The Rohingya are still considered unwanted foreigners even among Myanmar’s otherwise enlightened pro-democracy crowd. A Rohingya child who recently arrived by boat has his picture taken for identification purposes at a shelter in Kuala Langsa, in Indonesia's Aceh Province.

One of Aung San Suu Kyi’s chief confidantes previously told GlobalPost that she believes the word Rohingya is a “made-up name of the Bengali,” which is a term — implying as it does that Rohingya belong in Bangladesh — used by the government to insist they have no rightful home in Myanmar.

Asked after the elections about the Rohingya’s plight, another spokesman from her party told The Telegraph that they “have other priorities.”

Meanwhile, the Rohingya continue to endure dismal conditions in camps guarded by government security forces. Apartheid-esque laws seek to prevent them from traveling from town to town, having more than two children and voting in the recent elections.

“The government denies that Rohingya even exist,” says Shwe Maung, a Rohingya parliamentarian prohibited from running as an incumbent in the latest election. “This reinforces the perception among Rohingya that we’re unwanted and have no future in Myanmar.

“No wonder so many Rohingya try to flee.”