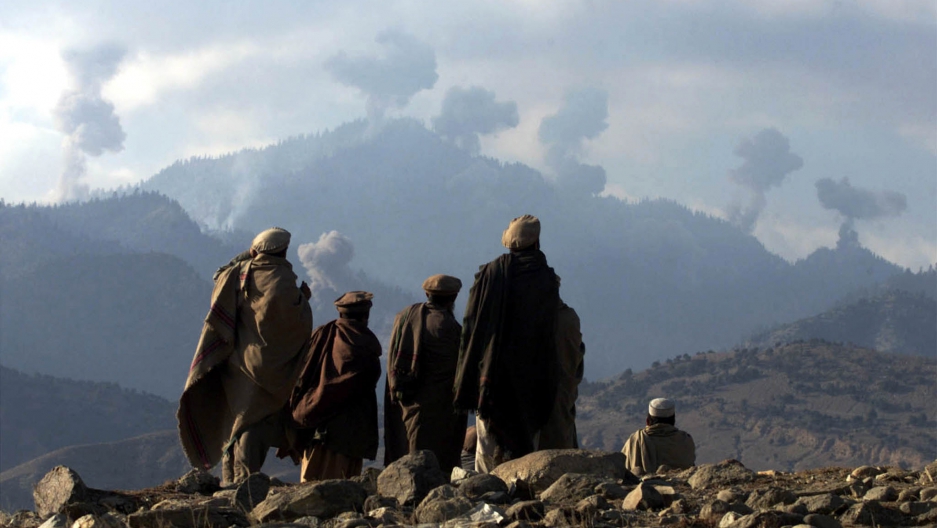 The battle of Tora Bora was one of the most important actions in the first phase of the war in Afghanistan. It was when Osama Bin Laden was cornered.

The intervention in Afghanistan began in October 2001, and Gary Berntsen of the CIA had specific orders. “Number one was destroy the Taliban, because they wouldn't surrender Bin Laden; (next,) destroy al-Qaeda as an organization. And then of course, finally, eliminate Bin Laden."

Berntsen was the CIA commander in eastern Afghanistan. In a BBC interview he recalled the moment when the Taliban regime collapsed, in December 2001.

"Bin Laden had fled Kabul. He'd moved along the road in a massive group. There were about 750-1,000 people with him. They had moved south to the White Mountains."

The White Mountains, on the border with Pakistan, contained the old jihadi cave and bunker complex at Tora Bora.

Berntsen says he knew exactly what needed to be done. But there was a problem:

"I had gone to the US military. I had requested a team to accompany me. They didn't want to do that yet, because they didn't believe that we had vetted allies sufficiently.

"They had to move very, very quickly. I had made my best case for that, and when I realized that I wasn't going to get support for that, I decided to go alone."

Alone meant with the handful of men immediately on hand. That added up to just four Americans and 10 Afghans. Berntsen had them scale a mountain where they could see the enemy.

"They contacted me and said we have these guys on the ground. Request permission to commence attacks. I then of course said yep, let's begin. I gave them the word. They then contact with a AWACS aircraft and then they lined up all the aircraft and began a 56-hour battle."

Berntsen says he did not seek permission from anyone.

“I did not inform CIA headquarters that I was doing this. I did everything possible to initiate a battle without asking for their permission because I was very concerned that they wouldn't authorize any of it. They would want to know how many people I had. There would have been a slew of questions. I didn't want any questions. I didn't want to hear anything from anybody.

"And quite frankly I didn't trust the seventh floor of the CIA to do the right thing, because they had not done the right thing for a number of years before that. And I didn't care if I was fired or relieved either. I was just going to do it."

Despite the critical nature of the mission, Berntsen says reinforcements were slow in coming.

“Fourteen guys from Special Forces would go. And then only later would 40 guys from Delta Force appear. So at no point were there more than 60 Americans there. There were more journalists at that battle than Americans."

To provide more muscle, Berntsen used his language skills and wads of cash to buy the loyalty of some local warlords. Then he had these 2000 or so "volunteers" attack on the ground.

"When you send people off, and you're conducting unconventional warfare, there aren't straight battle fronts. It's a confused situation on the ground. You are working with people that are unreliable. Some of them will turn against you, which did happen down in Tora Bora.

"So it was quite complicated, and there were times there where I felt there were some serious disconnects. The largest disconnect of course was that with the Department of Defense, because I understood my mission was to kill Bin Laden. I'm not sure that everybody in DoD understood that."

Another disconnect was the failure to have Pakistani troops seal the border, and Bin Laden ultimately was able to escape.

But Berntsen believes his battle was worthwhile.

"It was of course a flawed masterpiece. Part of it was failure on the part of policy makers to recognize that they needed to shift tactics but at that last piece at the end, we needed a larger number of American forces, but the Deptartment of Defense didn't recognize the importance.

"And all I could do was manage the forces I had to destroy as many members of al-Qaeda as possible. Bin Laden limped out of there. His force was destroyed. It took years to rebuild it. Many of his closest, most capable people died on the ground in our response to 9-11. And many of them died at Tora Bora."

Gary Berntsen was CIA field commander in eastern Afghanistan. He spoke with Rebecca Kesby for the BBC program, Witness.