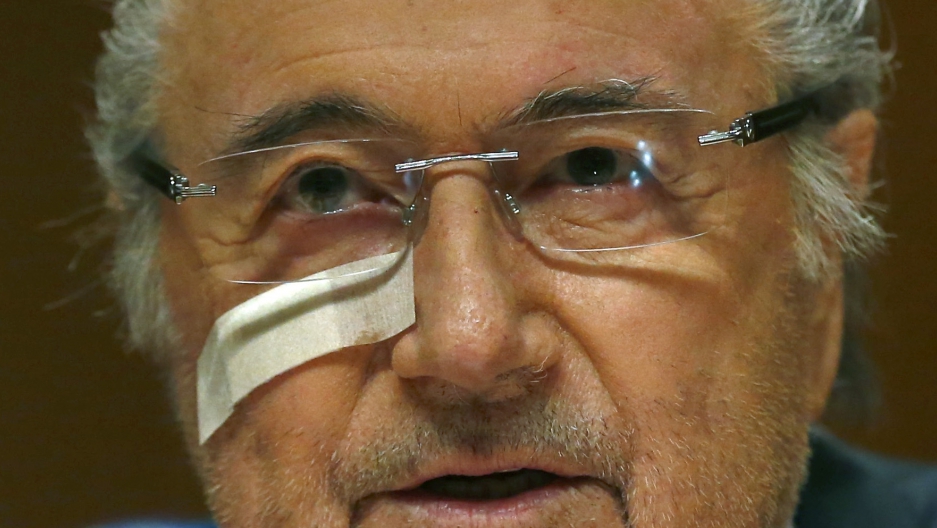 It sounds like a terrible punk band. But it's what has the former head of FIFA in trouble. Today, the organization's own ethics committee banned Blatter from the sport for eight years.

They based the penalty on a payment of roughly $2 million that Sepp Blatter issued to the head of European soccer, Michel Platini. Platini also was banned from the sport.

"This payment was not recorded in the FIFA books," says William Troop, soccer analyst at The World. "It was not declared by anybody. It was, according to the two of them, a 'gentleman agreement.'"

The ethics committee at FIFA thought it was graft.

The sum is a lot of money. But this is FIFA. And this graft seems small in comparison to sums thrown around to land tournaments like The World Cup. Troop says it does seem minor, but it's what the ethics committee could prove. "It may not be the most glaring or brazen act of corruption, but it certainly seemed unethical," he says.

Blatter will fight it. He gave a defiant press conference. But the optics was off. He was unshaven. He rambled. He had a bandage under his eye.

"He looked like a crazed man," says Troop. "And he said the only thing he is sorry for is being treated like a punching bag.'"

He ended it by quoting the Terminator, vowing to be back.

But for the US, and international investigators, the corruption in FIFA goes far beyond sports. US Attorney General Loretta Lynch said as much earlier in the month.

"The Department of Justice is committed to ending the rampant corruption we have alleged amidst the leadership of international soccer — not only because of the... brazenness and breadth of the operation required to sustain such corruption, but also because of the affront to international principles that this behavior represents," Lynch said.

As well as the ban on Blatter taking part in football related activities, there is also a plan for a overhaul of FIFA’s management and structures.

According to Sylvia Schenk, special adviser on sports to the pressure group Transparency International, there are promising signs in the these proposals, but they have yet to be proven in practice. “As far as I see it, it’s quite comprehensive. The main issue is that it takes time for implementation and for really changing the culture within FIFA, and within the continental associations and the national associations. And that’s a huge challenge.”

Schenk says the failure of FIFA and other sports organizations goes beyond any one individual, and relates to a wider cultural willingness to tolerate corruption. “For quite a long time, the public and even the media were not very critical of FIFA — and did not really care.  That just changed some years ago — and it’s the same as all other areas of life.”