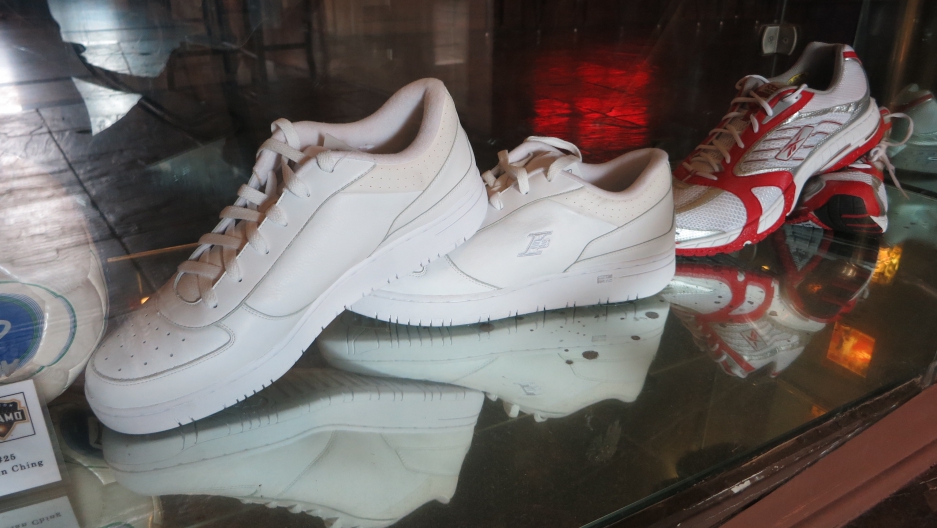 Yao Ming's size 17 shoes are on display at a Houston restaurant that his family partly owns.

Come to the George Ranch Historical Park just outside of Houston and take a step back in time to the 1820s. A re-enactor asks elementary school kids if they’d want to be cowboys and cowgirls settling Texas.

“How many of ya’ll want seven-square miles of Texas and a 12-year tax break?” he asks. Hands shoot up and the students all scream, “Me!!”

The ranch offers a cool way to learn Texas history. Nick Castelberg plays Cookie, the chef on a cattle drive. Besides making the food, Cookie was the doctor — best to stay on his good side to get the top "medicine."

“It’s up to me which you get when you get ill. So if you’ve been badmouthing my cooking, you’re not getting whiskey. You’re getting cod liver oil,” says Castelberg with a laugh.

Castelberg audience isn’t just kids though — there are visitors from all over, Britain, France, Australia and, increasingly, “Lots of Chinese. A steady flow.”

I asked Castelberg why. He says cowboys hold a universal appeal.

Still, if I’m a Chinese tourist planning my once-in-a-lifetime, or even twice-in-a-lifetime trip to the US, I’m hitting Los Angeles, New York or Vegas, baby! Houston, America's 4th largest city, has the world’s widest freeway: 26 lanes across. For real. Are Chinese tourists really going to choose Houston, or, I don’t know, Cleveland?

“Cleveland, actually you say that — there are Chinese ending up there. We see a lot of Chinese ending up in Kentucky, in St. Louis, in Portland,” says Evan Saunders, the CEO of Attract China, a company that helps American cities and businesses market to Chinese tourists.

Chinese tourists are soon expected be the largest group of overseas visitors (not including Mexico and Canada) to the US. And American cities like Houston are trying to cash in.

Saunders says, yes, Chinese travelers first visit New York, LA, and Las Vegas. But when they come back to the US, they want to tell their friends in China, guess where I’ve been that you haven’t.

“With photographs attached to it. So they get to really be the pioneers in that way,” says Saunders.

That might help explain why 63,000 Chinese visitors chose to visit Houston last year, more than triple the number from the year before. It helps that there’s now a direct flight from Beijing. That’s huge. It also helps to get lucky.

A few years ago, the Houston Rockets drafted Chinese megastar 7-foot-6 center Yao Ming. This was a gift from heaven for Jorge Franz, the senior vice president of tourism with VisitHouston, the city’s tourism office.

“When Yao Ming started playing, the Houston Rockets games became the most watched games on the planet, because the NBA was broadcasting these games in China,” says Franz.

Yao retired in 2011. But his legacy endures. I met Franz at the "Yao Restaurant & Bar," which is partly owned by Yao's family and where Norman Chao is the assistant manager. Chao says three tour buses a month come here packed with Chinese visitors. The food is good, but people really come here to “ooo and ahhh” at the display cases.

There’s other cool stuff in Houston — the museum district and the NASA Space Center. “We can touch the rock,” one Chinese visitor told me, referring to a piece of moon rock on display at the Space Center. (I saw plenty of Asian tourists at various stops in Houston. Most weren’t up for an interview in English, though.)

Still, research shows that Chinese visitors are choosing Houston first and foremost really to shop. They come to the Galleria, the fourth-largest mall in the United States with nearly 400 stores and two hotels. The mall is also undergoing a $250 million expansion — everything bigger in Texas. 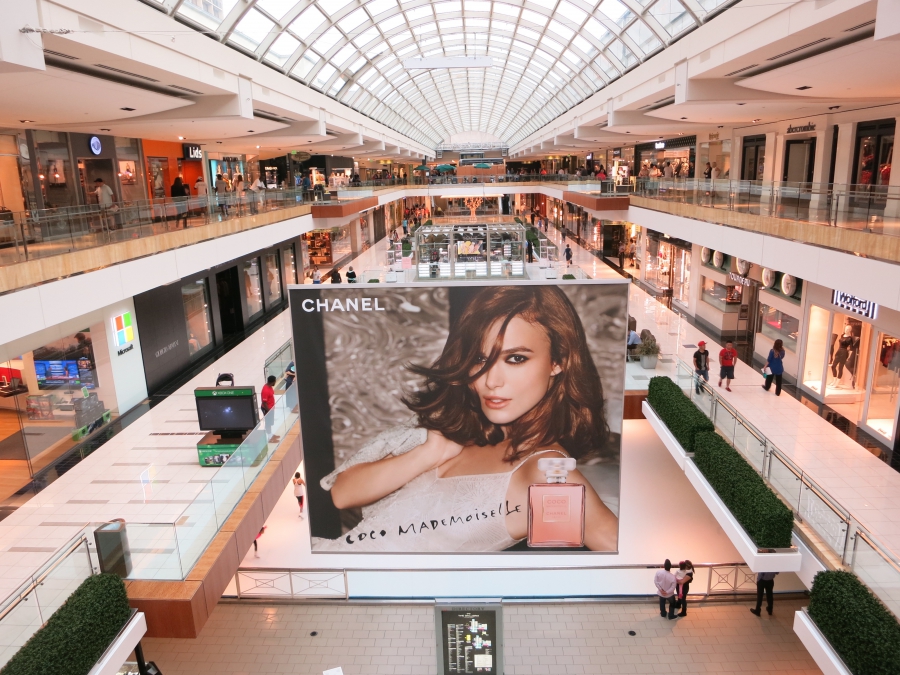 Houston's Galleria is the 4th largest mall in the US.

Nonetheless, I was skeptical. A mall is a mall, right? Not to a foreign shopper in Texas. They can take their receipts to the tax free office right there at the shopping center.

“They will refund your taxes, and then you can actually go back and shop some more with the taxes that you just received back,” says Andrew Wong, the director of marketing at the Galleria. “It’s a pretty good deal for international travelers.” (Louisiana is the only other state to currently offer this.)

Chinese tourists recently became the Galleria's biggest foreign shoppers by far, and stores are hiring Mandarin-speaking sales staff to cater to them.

Local hotels, like the upscale St. Regis Houston, are also tailoring their offerings to Chinese visitors.

“Two of our floors are butler floors, where we have butlers that pack and unpack the guests' luggage,” says Matthew Vesely, the hotel's director of sales and marketing, showing me around.

Everybody is treated like a VIP at the St. Regis, but Vesely says the staff goes a little further for their Chinese guests.

“When you travel domestically in China, most of the Chinese will not travel with their toothbrush because they’ll be getting a toothbrush at their hotel wherever their staying. But they don’t necessarily know that when they come to America, there’s not going to be a toothbrush waiting for them in the room. So we make sure we have that toiletry kit for them.”

Add it all up and Houston won't be knocking off New York anytime soon as America’s most-popular tourist destination. But if you meet someone from China who knows a lot about cowboys or the complexities of the Houston Rockets' offense, don’t be too surprised. 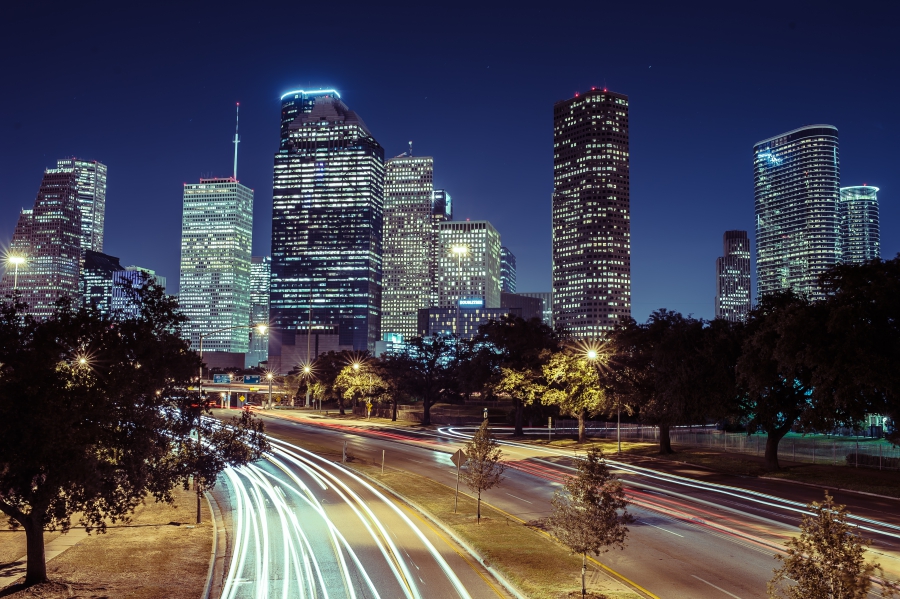