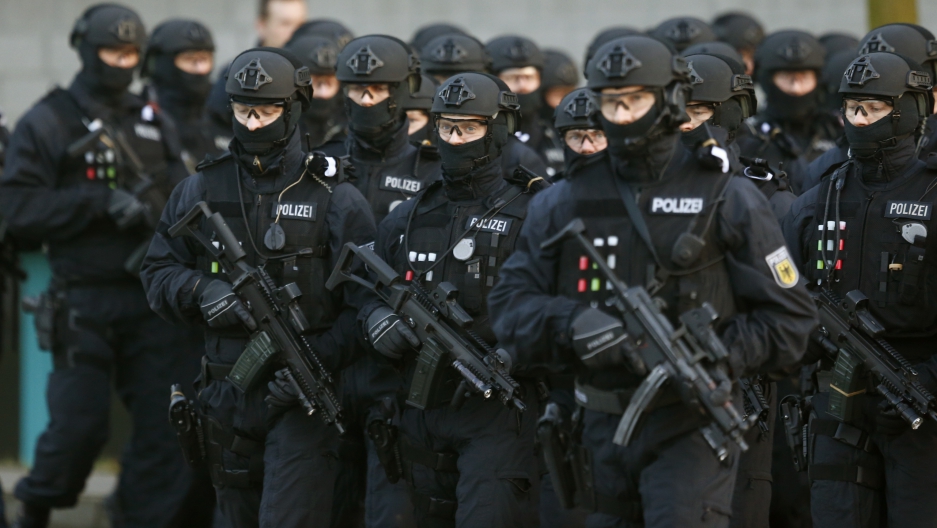 Members of the German federal police demonstrate their skills during a presentation of the new counterterrorism unit near Berlin on December 16, 2015.

Germany announced the creation of a new police counterterrorism unit this week. Officers with the special force are armed and trained to respond to terrorist attacks anywhere in the country.

But some still worry that the German police are not prepared for the threat.

The Charlie Hebdo killings early this year sparked a big public discussion in Germany. What emerged from the debate is the fact that German police forces might find themselves heavily outgunned if something like the Paris attacks were to happen in Berlin.

To hear more about this, I went to visit a private shooting club in a little village outside the capital, where off-duty police officers go for some recreational target practice.

One veteran Berlin officer who didn’t want to give his name told me he loves his M-16 assault rifle, which he jokingly refered to as, “my American girlfriend.”

“It’s not too heavy. It’s very fast. And it hits very exactly,” the officer said. “I like it!”

But this is not a police weapon. The M-16 is the officer’s personal property, which he only uses for target shooting. When he is on duty, he is armed with a 9 millimeter handgun, one ammunition clip, and nothing else.

He only wishes that Berlin cops had access to assault rifles, just in case they ever find themselves going up against terrorists armed with AK-47s, the same kind of guns that the Paris killers used to kill more than 100 people.

Germany does have one unit of police special forces, called the GSG9. They are a lot like the police SWAT teams in the US, with fully automatic weapons, body armor, the whole deal.

But GSG9 is based in Bonn, the old West German capital. That’s one reason for the creation of this new counterterrorism unit. It will be deployed in several cities and its officers will be armed and equipped to respond to terrorist attacks.

When it comes to the cops on the streets of German cities, however, it’s a very different story.

“The problem is that our local police do not have the weapons or the body armor to handle anything like what happened in Paris. If something like this does happen here, our police officers are going to end up being cannon fodder,” says Steve Feldmann, a spokesman with the Berlin police union.

Feldmann says the Berlin police have requested better body armor, but their request has been refused. He agrees that they need more firepower, including machine guns. But even if they got those guns today, he says his officers are not trained to use them.

“The truth is that many Berlin police officers have not fired a single shot over the last one to three years. That’s because we don’t have enough shooting ranges. So, what they did was try to do some training with laser tag, but we cannot sugar coat things here. This is an extremely dangerous situation.”

Feldmann thinks the new counterterrorism force is good news, but he says it’s only one step in the right direction.

To be sure, this is all pretty scary stuff to be talking about. For decades, Europeans had the luxury of not having to worry about the kind of mass casualty shootings that happen regularly in the US. Germany doesn’t have anything close to American gun culture.

But Feldmann and others say the German public and German politicians might need to start thinking more seriously about new kinds of threats and how best to prepare for them.