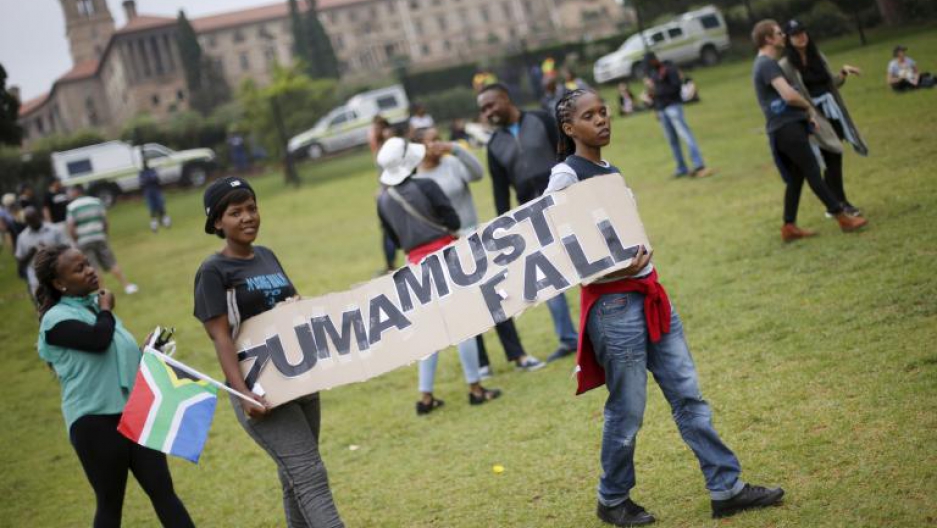 Protesters carry placards as they take part in a 'Zuma must fall' demonstration in Pretoria, South Africa December 16, 2015.

Thousands of South Africans have marched against their president, Jacob Zuma, declaring that #ZumaMustFall

It’s the latest hashtag campaign to galvanize widespread support in South Africa, and comes on the heels of #FeesMustFall, the massive student protests in October that led to Zuma announcing there would be no increase in college tuition fees next year.

Wednesday’s protests in the major cities of Johannesburg, Cape Town and Pretoria drew thousands of largely middle class South Africans. They called for Zuma to resign or be “recalled” by his party, the African National Congress, which was returned to power in 2014 with a slightly reduced majority of 62 percent.

The demonstrations follow Zuma’s firing of respected finance minister Nhlanhla Nene last week, a shock move that roiled investors and sent the rand currency tumbling. Zuma, who had been held to task over state spending by Nene, appointed a virtually unknown backbencher in his place.

Under pressure, Zuma late Sunday announced he was ditching the replacement and instead appointed Pravin Gordhan, a well-regarded former finance minister, back to the position.

While this eased fears for the economy, there is broader discontent over corruption in the ANC-led government and frustration with the frequent scandals that have characterized Zuma's presidency.

Addressing the marchers in Johannesburg, Zwelinzima Vavi, the former general secretary of the powerful trade union federation allied with the ANC, railed against the “corrupt hyenas that are ripping our society apart.”

“We are up to here with their corruption,” he said. “We have come here to say to the president — we are gatvol [fed up], we cannot take it anymore.”

More from GlobalPost: South Africa debates a taboo question: Was Mandela a sellout?

Dec. 16 is the Day of Reconciliation, a national holiday celebrated in post-apartheid South Africa on a date of historical importance to both Afrikaners and in the ANC’s liberation struggle.

Zuma addressed celebrations in the coastal city of Port Elizabeth, where he spoke about the need for healing in the nation, but failed to directly respond to the criticisms against him.

Many South Africans are now heading off on their December summer holidays — promising to return to the #ZumaMustFall campaign in the new year.