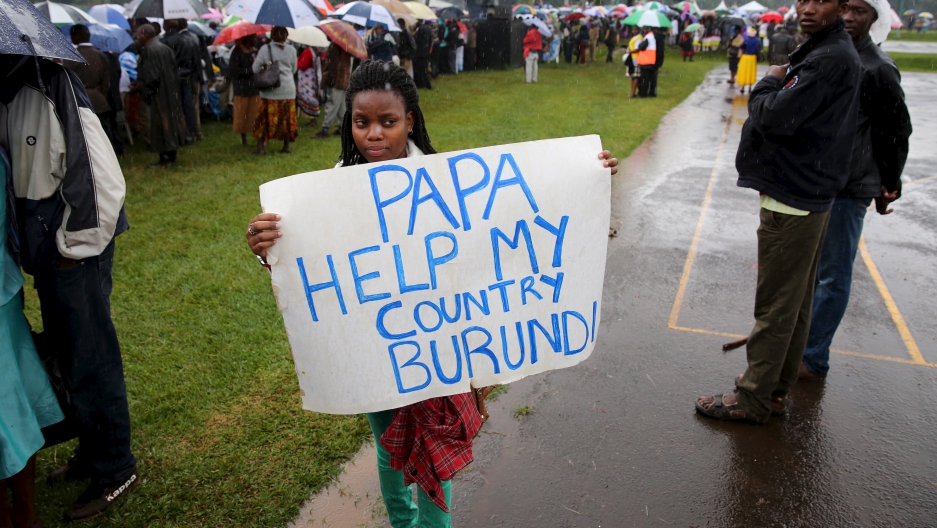 A woman holds a banner to call attention to increasing violence in Burundi before Pope Francis delivered a mass in Nairobi in November. Burundians abroad — including those in the United States — are closely following the news from their homeland.

On most Sundays, 24-year-old Ndihokubwayo Chanceline takes her spot near the altar at Pittsburgh’s Cornerstone Free Methodist Church and does what she loves — belting out a solo.

“I love singing,” she says. The songs she and the church choir sing, in Swahili and Kurundi, are about accepting fate, letting love in — and building faith.

Right now, the focus is on faith that Burundi — where insurgents are battling government forces — will avoid civil war.

Chanceline and many others here at the church, a popular meeting place for Pittsburgh’s growing Burundian community, know the costs of war. Over the last decades, waves of Burundians have fled ethnic conflict, first in the 1970s and again in the early 1990s, and thousands have resettled in the United States.

Chanceline herself is Burundian by blood — not by birth. Violence in the 1990s led her family to the Congo, where she was born. Next, it was years in a refugee camp in in Tanzania (camps now being reopened), before being resettled in the United States eight years ago.

At the camps, the choirs were a lifeline. “It was something that brought us together, going to church every Sunday,” she says. “When I’m singing it’s like I don’t care what’s going on behind me, I just forgot everything. Singing was very important [especially for] children. It helped because we didn’t have to keep focusing on, oh, we are refugees, or we don’t have food today, what are we gonna eat?”

Now, Chanceline continues the tradition in Pittsburgh, where there are at least two choirs. Alongside her at the Methodist church is 20-year-old bass player Alex Ndagijimana. He says that what is happening in Burundi, again, is heartbreaking. “It’s sad, it’s really terrible,” says Ndagijimana, who was born in Burundi and left with his family in the early ‘90s.

But thousands of miles away, there is little the congregation can do about the violence back home apart from staying in touch with their relatives — and offering their prayers and song.