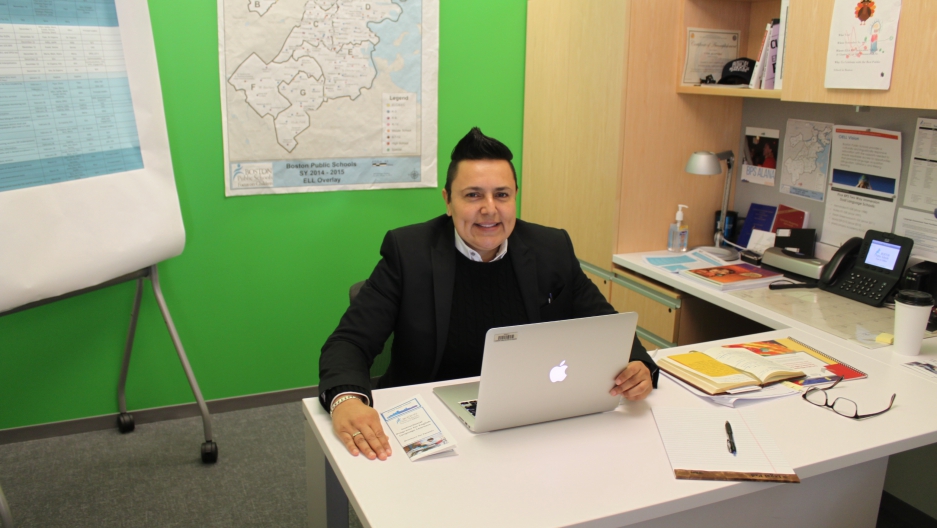 If you ask Frances Esparza to describe her big new job, she'll give you a careful, bureaucratic, education-speak answer:

"My task is to lead a department based on our vision," she says, "which is to provide culturally and linguistically responsive education with the supports needed to ensure equitable access and opportunities to students, and really promoting language acquisition, bilingualism and biliteracy."

Got that? But ask Esparza, an assistant superintendent in Boston's public schools, where her passion for language instruction comes from, and she'll tell you a really moving personal story about her roots as a 5th generation Mexican-American from East L.A.

"My mother and I went to the same elementary school. My mother went in the 1950s at a time when she couldn't speak Spanish in school," she tells me. "My mother has ten siblings. She's the eldest. She was the ringleader so she had to gather them and  make sure everybody knew what was happening on what day and where they had to meet to be able to walk home together from school and you know just in conversation in Spanish on the playground or in passing she and her siblings as well as other families with Spanish-speaking children would get in trouble and they'd get paddled by the principal."

Esparza's mother was paddled several times for the offense of speaking Spanish.

"Once it got really bad where they broke her skin and she wasn't able to go to school for a few days and my grandparents kept her home."

That was a turning point for the whole family. The parents told the kids they had to stop speaking Spanish.

"And unfortunately to this day my mom and her brothers and sisters can barely speak Spanish," she says.

"My grandparents didn't want to fight the system. They were a quiet, humble, Mexican couple in 1950s L.A. My family assimilated quickly and with that they lost their language and their culture."

Esperza, assistant superintendent of Boston's Office of English Language Learners, is one of 117 grandchildren, but only five of them, her included, can speak to their 94-year-old grandfather in Spanish.

"I'm very close to him," she says. "He's the one who put the Spanish newspaper in my hands at the age of three and said, 'Read. Tell me what you read; explain it to me.'"

Ironically, by the time she got to her mom's elementary school, City Terrace Elementary School, it was one of the first dual language schools of the 1970s. She studied Spanish for 30 minutes a day there and continued studying the language her family had lost in middle and high school and in college.

"I always did it not so much for the educational purpose; it was really to have those rich conversations with my grandfather that I can have today. It is very near and dear to my heart for students to be able to keep their language and their culture."

Esparza tears up as she tells me this.

"I don't know if you can see but it's a little emotional for me. Going back to know that my Mom was paddled for that...that hurts."

All this matters in Boston, where so many students are newcomers to the US that they speak more than 80 languages at home and a third of them are classified as "English Language Learners." About half of those ELLs, as they're known, aren't getting adequate services, according to the US Department of Justice. Esperza's new job is to overhaul the system so those kids are getting the instruction they need to succeed. She says a settlement agreement between the DOJ and the Boston Public Schools is partly why she was attracted to the job.

"Not so much the political piece of it, but looking at the heart of the cultural piece of where I'm from and what I believe in," she says. "This is like a dream to come and work with these populations, to be able to implement bilingualism and biliteracy here. Of course, number one, learning English, is one of the most important pieces. However, keeping your culture and your primary language is just as important."

Readers, has anyone in your family been punished for speaking their native language? Let us know in the comments section below.