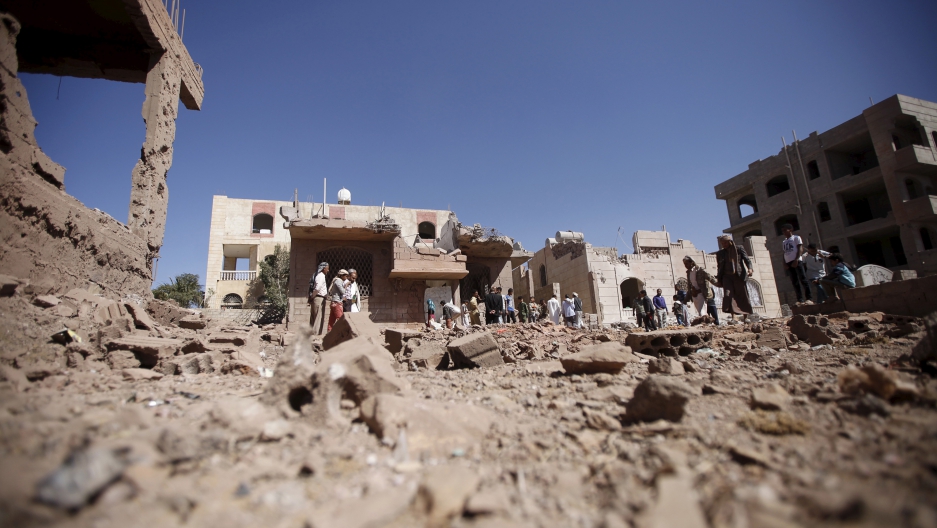 Damage from a Saudi-led air strike in Yemen's capital Sanaa. Saudi Arabia is ‘bogged down’ in Yemen, but is now setting up an alliance to fight terrorism across northern Africa and south-west Asia.

On Monday, US President Barack Obama called on Muslim nations to do more in the fight against the so-called Islamic State. As if on cue, a few hours later, Saudi Arabia announced the creation of a 34-nation alliance to fight terrorism. The US has welcomed the move.

“If this goes the right way,” says the BBC’s security correspondent, Frank Gardner, “this could be very effective.” But there are also potential problems.

The alliance will be headquartered in the Saudi capital, Riyadh. That fact, says Gardner, “means it’s no surprise that Iran, its big regional rival, is not in it. Nor is Syria or Iraq… Iraq and Iran are Shia majority countries. So it’s slightly a reflection of the rivalry between the big Saudi Sunni powerhouse, and the Shia one in Iran.”

Details of the operational scope of the alliance have not been made clear, but “nothing is off the table,” according to Gardner. “They’re going to be looking at all ways of tackling terrorism: funding, ideology, as well as on the ground.”

“But if you look,” says Gardner, “at the countries where the so-called Islamic State is most active — Syria and Iraq — those two countries’ governments are not included in this coalition. So it’s really not clear how the Saudis are going to conduct counterterrorism operations in those countries without the permission of their governments. In Syria I suppose they could operate in those areas where the Saudi-backed rebels are active. But in Iraq it’s more of a sovereign state, with sovereign borders. It’s going to be harder for them to do it there, I think.”

But the Saudis have announced that they are in consultation with their allies in Bahrain and the UAE, to send special forces into Syria.  Gardner says that indicates a very aggressive attitude, “some would say imperialistic.”

Saudi Arabia is already involved in the complex civil war in Yemen, along with Bahrain and the UAE. Gardner says they are “bogged down” there, having made little progress since their intervention began in March 2015.

Gardner says “it wouldn’t surprise me at all,” if the new alliance is used to buttress the Saudi-led intervention in Yemen.

Another potential problem, says Gardner, is the Saudi definition of terrorism, which he says “is rather broader than most people’s. They extend it to include political opposition and reformers and bloggers and people like that. So there is a worry and concern — I spoke to Amnesty International and they are certainly concerned that this is going to be used as cover for cracking down even more on political dissidents.”

Gardner says the Saudis “have been stung by a number of international criticisms leveled at them. One is that they’re not doing enough for Syrian refugees. The other is that they are partly responsible for the misery taking place in Syria because ISIS is in some ways close to their very narrow minded Wahabi ideology, which in some cases becomes sort of what’s called Salafist Jihadist.

"The Saudis say this isn’t fair because they are a target for ISIS, and that ISIS would like to overthrow them and take over the Grand Mosque in Mecca and so on, which is certainly true. But there’s no getting away from the fact that over 4,000 Saudis have gone to join ISIS (and) there’s still a lot of popularity in Saudi Arabia for what ISIS stands for.

Of the 34 countries in the alliance, 20 are in Africa.  Some have their own problems with Islamist insurgencies, like Nigeria, Tunisia and Chad, while others like Djibouti and Benin are relatively trouble-free.