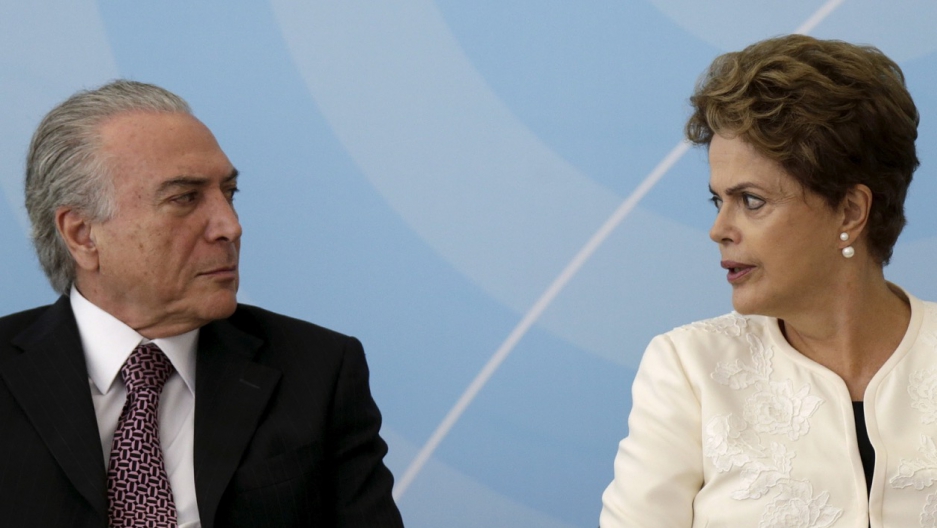 The crazy world of Brazilian politics is piling on the melodrama again.

The backdrop is chaotic: corruption scandals, a recession-turning-depression, and a possible impeachment of the president. The public is pretty repulsed right now by their elected officials.

But scenes in Brasilia this month look even more than ever like a “telenovela” soap opera, the ones with the big hair, bigger egos, and wild plot lines.

Here’s a binge-worthy recap of the latest episodes.

On Tuesday, the entertainment started with an emotional letter from Brazil’s vice president to the president that was leaked to the media. From the way Brazilians laughed at it, you’d think it was a scene from HBO comedy series “Veep.” (Okay, not a telenovela, but hilarious.)

But the veep sounds so upset.

“I’ve always known you and your team have absolute distrust in me and the PMDB,” reads Temer’s letter to the president.

The undertones are serious — what if Temer turns against her?

The drama was so high that the note quickly became a meme on social media. By week’s end a popular comedian here made it his stand-up shtick.

“Who sends a letter?” asks the comedian Gustavo Mendez during his show. “Doesn’t this guy have email or WhatsApp?”

2. A slap fight during a congressional ethics hearing

On Wednesday, things got violent.

The fighters are congressmen Ze Geraldo and Wellington Roberto and, believe it or not, they are actually on an ethics panel, debating corruption allegations against the house speaker.

Speaker Eduardo Cunha, as we’ve reported, is an evangelical conservative who has said the United States government and NGOs are conspiring to wipe out poorer populations with abortion. He’s the one who set off the impeachment process against President Rousseff.

Cunha also happens to be facing calls for his own impeachment as prosecutors investigate him for allegedly hiding millions in illegal payments in Swiss accounts. He denies any wrongdoing. This Tuesday, police raided his home.

During the ethics hearing last week Wellington came to Cunha’s defense, saying the efforts to impeach him are a “coup attempt.”

3. Brazil’s agriculture minister tosses her wine on a senator

Wednesday night was no less dramatic.

Agriculture Minister Katia Abreu isn’t pleased with the misogynistic machismo that seems ubiquitous in her country.

She was attending a dinner party when a fellow guest, Sen. Jose Serra, called her an epithet that can be translated as “man eater.”

Abreu was having none of it, and dumped her glass of wine on the 73-year-old lawmaker, according to Brazilian news reports.

The agriculture minister then posted on Twitter: “I reacted as a woman defending her honor,” and “It was unfortunate, disrespectful, arrogant and sexist.”

4. Brazil’s president lands too late for Argentina’s swearing in

The inauguration of Argentina’s new president, Mauricio Macri, was apparently quite a soap opera in its own right. Unfortunately (or perhaps fortunately), Rousseff herself did not get there in time to see it.

According to Brazilian media, Rousseff’s plane had to circle Buenos Aires for 20 minutes before landing, which meant missing the main event.