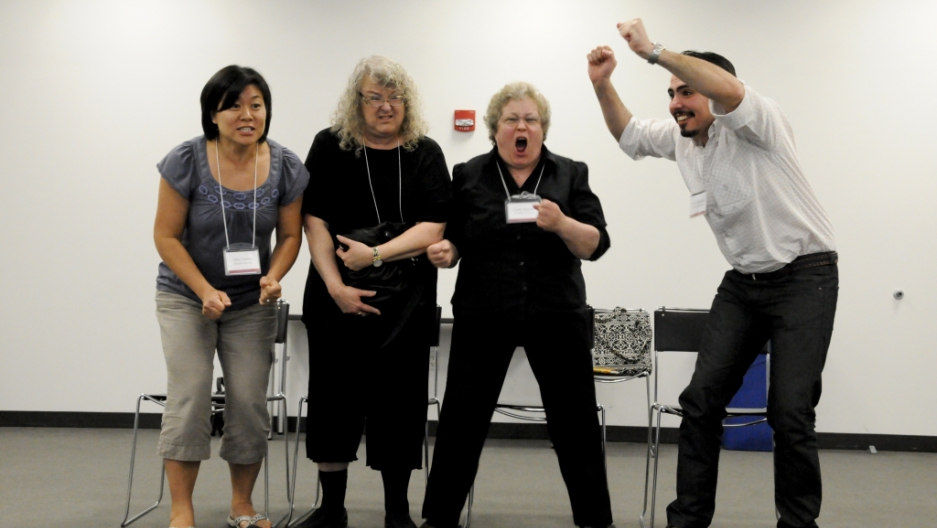 A group of scientists learn improve from the Alan Alda Center for Communicating Science.

Improv is something you expect to find on Saturday Night Live, not in the science lab. A couple of acting teachers, however, are beginning to introduce improv acting and communication techniques to the science syllabus. “JRN 503: Improvisation for Scientists” is a course now on offer at New York’s Stony Brook University.

Alan Alda is an actor, director, screenwriter and board member for the World Science Festival. He’s also one of the people behind the new improv class for scientists at Stony Brook University in Stony Brook, New York.

“This basic kind of improv is not where you try to turn the scientist into a comedian or an actor,” Alda says. “It's not a jokey kind of humor. It’s the pleasure of spontaneity, so that if something occurs to you in that split second, it’s free to come out. You trusted it, you trust yourself, and the audience is delighted.”

“A lot of it is just about learning how to listen and be available to whatever's right in front of you,” Lantz-Gefroh says. “The tool that they learn in improv is that, if that's not working, they need to be aware of the fact that it's not working, and able to make an adjustment on their feet, not feel like they failed. ... So the games that we play are a lot about just listening, availability and being able to make spontaneous adjustments and also bring their own passion to the moment so that they're coming from a place of excitement in their own work”

Alda and Lantz-Gefroh say the classes have yielded exciting results for science and medical students.

One medical student used his improv training from a game called ‘Mirror Exercise’ that teaches students to slow down, be more simple and empathetic. He had an encounter with a patient to whom he had to break bad news. He had to tell her that her cancer had metastasized and she had only two weeks left to live. He was terrified going into the conversation.

At first the woman had no reaction at all to the news. He had the feeling she didn't understand what was happening, so he decided to use some of his improv training.

“He said, ‘I sat down with her and we held hands. ... I told her in the simplest possible way what was happening. I didn't use any three-syllable words. I didn't use the word ‘metastasis,’ I didn't use the word ‘prognosis.’ I just tried to be simple and slow because I knew that there was a pacing to the way that you could hear this information.’ And he said ‘For the first time, the woman started to cry.’ And when she cried, it made him cry, and then when he cried she had a question,” Lantz-Gefroh says. “He said ‘What I felt happened was that I was able to help her understand how to understand the end of her life. And she was able to help me understand how to be a better doctor.’”

Other students say the improv classes have helped them better understand their own scientific work.

“These are senior scientists very often. And after going through this training with us, they get so used to thinking in basic language, and facing the concepts without over-intellectualizing them that they have a greater understanding of their own work,” Alda says. “That's a wonderful thing — they can actually make more progress in their work because they see it in a fresher way. One scientist told me he doesn’t face the data in a way where he tells the data something. He lets the data talk to him.”

Others find the improv classes help them get through school.

“Our medical students have told us that they're actually learning material easier because, as it's being given to them, they're starting to distill it in their own minds and think ‘If I was to say this in plain language, what would it be?’ And it's helping it to stick with them longer,” Lantz-Gefroh says.