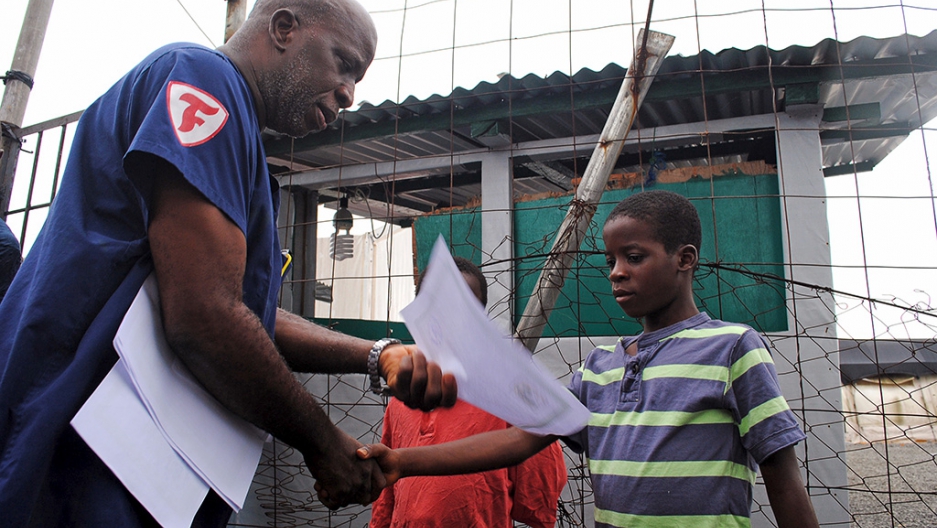 Moses Duo, 9, receives a certificate for being cured of the Ebola virus in Paynesville, Liberia, July 20, 2015.
Credit: James Giahyue
Share

MONROVIA, Liberia — I am a Liberian who worked on the front lines to end the Ebola outbreak in my country, and I am deeply saddened that three new cases of the deadly virus were recently confirmed in a community near Monrovia — the nation’s capital and my hometown. This tragic news came less than three months after Liberia was declared Ebola-free, and it was followed immediately by the release of two international reports criticizing the World Health Organization (WHO) for the slow pace of its early response to the epidemic.

Although the WHO was sluggish in responding to Ebola, I urge world leaders to stop focusing solely on major international organizations and put as much, if not more, energy into understanding the crucial role played by trusted, local grassroots groups in communities hit by epidemics. The deaths of 11,000 West Africans from Ebola demand that we move beyond a myopic focus on the role of elite organizations and commit ourselves to learning life-saving lessons from the work of local groups battling this and future epidemics.

The deaths of 11,000 West Africans demand that we move beyond a myopic focus on the role of elite organizations and commit ourselves to learning life-saving lessons from the work of local groups.

Since the Liberian Ministry of Health declared an outbreak in March 2014, grassroots groups have led the charge to educate and equip Liberians to prevent and contain Ebola in their communities. While their impact has been impressive, we have read hardly a word about them.

One grassroots group, the National Imam Council of Liberia (NICOL), worked with local religious leaders to convince Muslim communities that it was acceptable to forego sacred burial traditions that involve touching the dead — a major source of infection in the early months. Members of the Grassroots Agency for Social Services (GRASS) went door-to-door to educate community residents about Ebola and how they could protect themselves from it. Civil Society Ebola Response Taskforce (CSERT) monitored local officials’ use of Ebola response funds. These are just a few examples of how grassroots organizations fought the Ebola epidemic in ways that larger and non-Liberian organizations could not.

To understand the value of these local groups, we must first understand the challenges the government and elite foreign aid groups faced during the early days of the outbreak. These challenges included a health care system that was stretched to the brink of collapse, too few internationally supported Ebola Treatment Units (ETUs), and widespread doubt and denial — perhaps the most difficult obstacle for the government and foreign groups to overcome.

As Ebola sick beds overflowed, case totals continued to climb because healthy people were getting infected. Many Liberians didn’t trust our government’s warnings and some even believed corrupt officials were exaggerating the epidemic to line their pockets with foreign aid money. Aid workers from other countries who tried to convince Liberians to take the virus seriously were often dismissed as outsiders lacking credibility.

As things worsened, Liberian grassroots groups went where others could not — into the heart of the most vulnerable communities — and convinced even the most doubtful and frightened Liberians to heed their advice. They disputed myths, distributed hygiene kits, traced people who came in contact with the sick to halt the further spread of the virus — and so much more.

Local Liberian groups did not have greater emergency response skills than the foreign staff and technical experts working with international organizations. What they did have was a most precious resource in an emergency: the public’s trust. Their long-standing connections to the communities where they lived and worked enabled them to serve as effective responders, educators and advocates. These trusted local leaders complemented the efforts of global organizations, which provided technical support to the Liberian government and treated Ebola patients.

As world leaders reflect on the Ebola outbreak and what the WHO or other elite organizations could have done differently, I implore them to give equal attention to the role of grassroots groups during this crisis — and to the game-changing role such groups must play in future health emergencies. Without the efforts of local organizations, I have no doubt that my country would still be battling the full force of the Ebola outbreak. Thanks to them, I’m confident that we will eradicate this horrific disease from our land once more.

Dayugar Johnson is the in-country consultant in Liberia for American Jewish World Service.