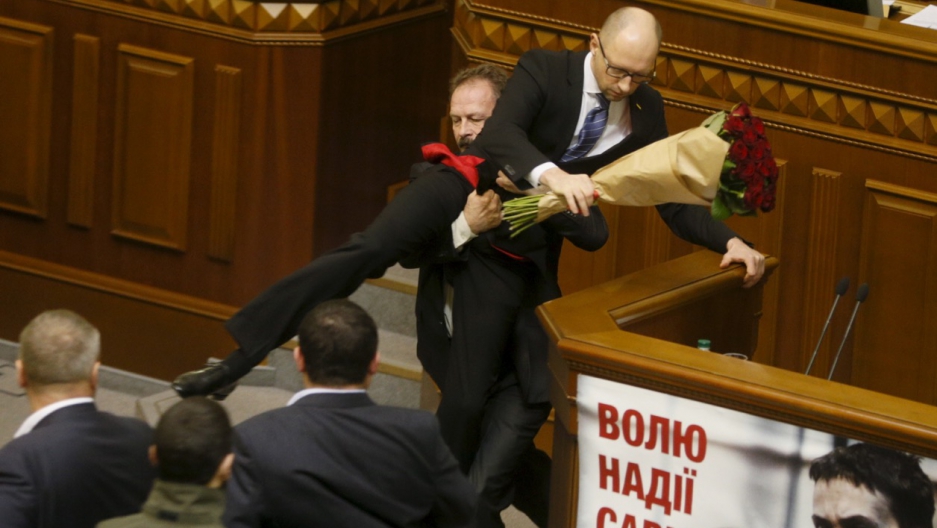 KYIV, Ukraine — Stick-wielding protesters and bombed out villages are the kind of images often associated with Ukraine these days. But there’s another trademark: wild parliamentary brawls.

The latest fight broke out Friday after a lawmaker from the ruling coalition attempted to forcibly remove Prime Minister Arseniy Yatsenyuk from the podium.

Yatsenyuk's party allies leapt to his defense and bum-rushed the attacker, Oleh Barna.

The incident quickly went viral and generated some seriously unfortunate memes, thanks to the peculiar way that Barna decided to grab Yatsenyuk — by the crotch.

Ukraine is definitely not the only country where it gets rough and rowdy in the legislature. But it does happen more often than it should.

Street brawls in parliament are common even though the former Soviet republic is struggling to adopt European Union-style social and political values. They often break out over controversial bills or during emotionally charged political speeches.

Prime Minister Yatsenyuk is deeply unpopular at the moment, and his opponents are fired up as ever.

Opposition legislators are calling for a no-confidence vote in Yatsenyuk and his cabinet amid stalled reforms and mounting allegations of corruption.

On Friday, Yatsenyuk was defending his embattled government’s record when Barna, a fierce critic of the prime minister, charged at him, handed him a bouquet of red flowers, and tried to haul him off.

Fighting is so common that Ukraine-watchers are hardly surprised anymore.

It is an embarrassment for this country.

Earlier this week, United States Vice President Joe Biden came here to parliament to urge lawmakers to get serious about reform and live up to the ideals of last year’s pro-democracy revolution, which ousted an autocratic pro-Russian president.

“It may be your last moment,” he said in a powerful speech. “Please for the sake of the rest of us ... don’t waste it. Seize the opportunity. Build a better future for the people of Ukraine.”

Biden’s words were a response to the widespread corruption, faulty justice, and political immaturity critics here and in the West say are regular facets of life.

That’s why many Ukrainians saw Friday’s brawl as another sign their country just can’t shake its troubled past.

“You can expend as much effort as possible on PR, filming wonderful promotional videos, but when a member of the coalition commits such acts, nothing more needs to be done,” wrote Taras Berezovets, a political consultant in Kyiv. “Everything is already taken care of.”