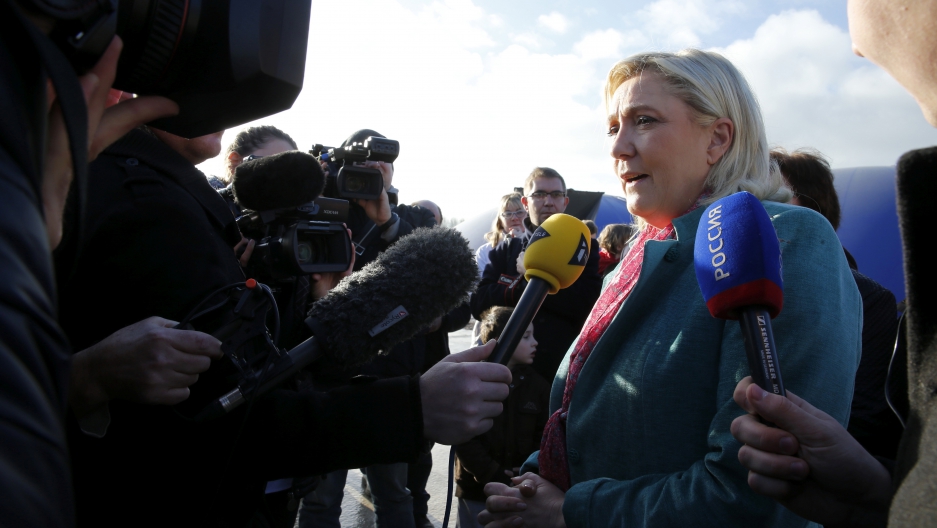 Marine Le Pen, French National Front political party leader and candidate for the National Front in the Nord-Pas-de-Calais-Picardie region, is surrounded by media as she campaigns for the upcoming regional elections.

American journalists are missing the heart of the crazy stories erupting in their own backyard, say foreign journalists covering the US.

A French and a Mexican journalist spoke of common themes, as well as these missed opportunities.

The recent election gains of France's conservative National Front, following the terror attacks in Paris, echoes Donald Trump's rise since the mass shootings in San Bernandino, California, says Gilles Paris, who covers the US for the French newspaper Le Monde.

Trump and Marine Le Pen, the head of France's National Front, both have major anti-immigration stances and both are appealing to the same kind of voters, he says.

Who are they? Gilles Paris described them as such: "The people who consider themselves the losers of globalization and people who are not very educated, who are struggling with economical difficulties and who have a big anger toward at what they call the political or the media elite."

Both Gilles Paris and Jesus Esquival, who covers the US for the Mexican weekly Proceso, say American journalists are missing a lot of important angles when it comes to coverage after the San Bernandino attack.

"They forgot to cover the whole story, how easy it is to buy arms in the US." says Esquivel. "This is not the first mass killing that happened lately in the US; the real factor is that arms are so easy to buy."

Both agree that American journalists are focused on covering whatever comes out of Trump's mouth.

"Everytime he says something," says Esquival. "He has the last word."