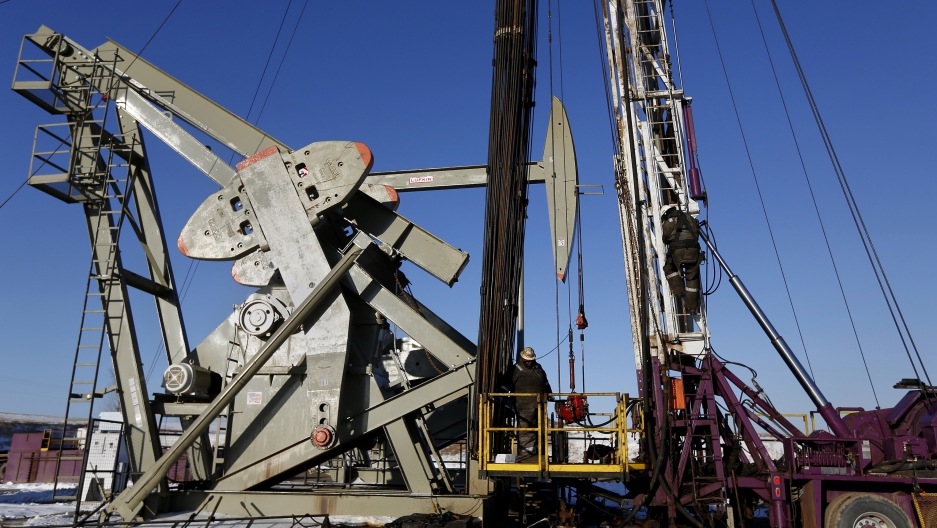 A man climbs down an oil derrick on a rig of an oil drilling pump site in McKenzie County outside of Williston, North Dakota March 12, 2013.

Has oil become an unwanted commodity? Plunging prices suggest something is going on.

While diplomats in Paris hash out a legally binding accord to significantly curb greenhouse gas emissions, oil is trading at a seven-year low, closing Tuesday below $40 per barrel.

The price drop follows OPEC's failure to put a cap on oil production last week. Energy analysts predict prices could go lower in the next 12 months, but Dan Dicker, an oil analyst with The Street and OilPrice.com, says we could be in for a wild ride that will drive oil prices back up — way up.

“I think there could be a change of four to five million barrels [a day] over the course of the next 22 or 23 months in terms of what comes off line in terms of supply and what gets added in terms of demand,” says Dicker, the author of "Shale Boom, Shale Bust: The Myth of Saudi America." “It would mean a huge difference in the price of oil. In fact, I’m looking at prices in three digits as early as 2017.”

Dicker concedes that his hypothesis deviates sharply from other analysts who believes prices will stay low. He argues that the Saudis have reached a new limit when it comes to oil production.

“I think that they’re literally, and again I’m on the other side of this, as close to full production capabilities as they’re going to get,” he says. “They’re at a little more than 11 million barrels a day. We’ve talked about spare capacity for years with the Saudis, with a sort of a question mark on how much spare capacity they had. In other words, how much can the ultimately pump if they just wanted to open up the spigots full bore? This — 11 million barrels a day — has absolutely shocked the analysts from their predictions two, three, or four years ago. I think that the limits have really been reached.”

Over the next six to eight months, Dicker predicts that oil and gas prices will remain low, under $50 a barrel. In the long-term, other members of OPEC can increase production if they secure funding, including Iran and Iraq, but Dicker doesn’t find such a scenario possible.

“The potential there is huge,” he says. “But with all that’s going on there geopolitically, obviously that’s not a great bet to increase production two or three fold over the next three or four years.”