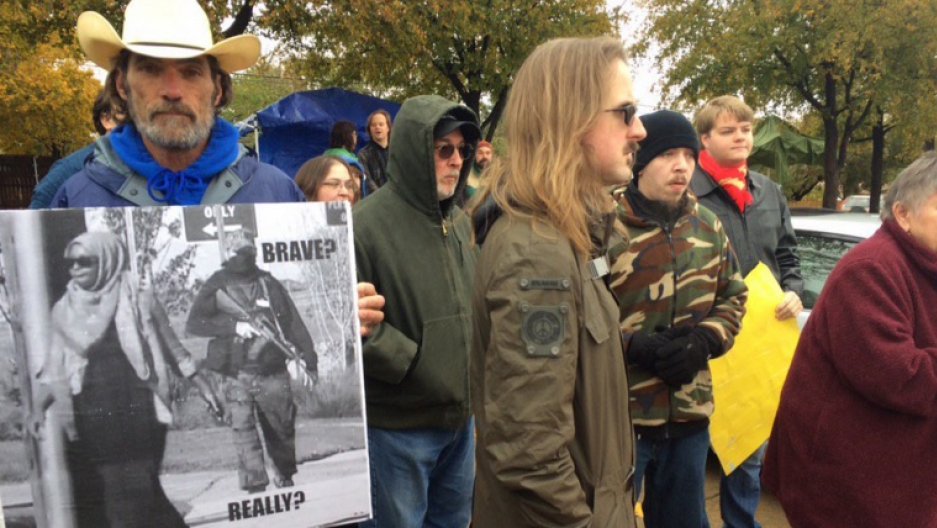 Dueling demonstrations in Irving, Texas: Residents supporting their local mosque hold placards critical of armed men who are intimidating those who attend the Islamic center.

Anti-Islamic sentiment is on bold display in Irving, Texas.

So is support for freedom of religion.

Protesters dressed in camouflage and armed with loaded rifles have been demonstrating in front of the city's largest mosque. Others are coming out to back the Muslims who practice their faith at the Islamic Center of Irving.

Avi Selk, a staff writer for The Dallas Morning News, says the dueling protests have polarized what was a "fairly normal suburb."

"They were arguing about things like whether to build a concert hall, but were suddenly transformed into a sort of stage where people are holding rallies and making public statements, a stage for people from outside the city to come and kind of act out their parts in this controversy over Islam," Selk says.

Irving was in the news in September when its most famous resident, 14-year-old Ahmed Mohamed, was arrested after bringing a clock to school in a suitcase. Officials mistook it for a bomb.

The city is a cosmopolitan Dallas suburb. One third of its residents are foreign born.

Selk says the mosque attracts some first-generation immigrants, and the vast majority of the Muslims he's met there are professionals.

"They're generally techies. They're Microsoft employees, they're very very well educated," he says. "One of the first Irving, Muslim grassroots activists I met had worked on the particle super-accelerator that they were building in Texas."

"They're all from cities in the general area," he says. "Some of them are convinced that there's going to be, you know, a violent confrontation with American Muslims. If you've seen images from that protest, you'll see a man with a long-barrelled gun and camo gear walking down the sidewalk behind a woman in a headdress on her way to worship."

Last week, a group associated with the Ku Klux Klan, the Texas Rebel Knights, announced they also want to demonstrate at the Irving mosque.

That's concerned many residents, who seem to just want the controversy to go away.

"There's a lot of people who have affection for their city, and they don't like to see it in all these international news stories labeled by some as the hotbed of Islamaphobia," Selk says.