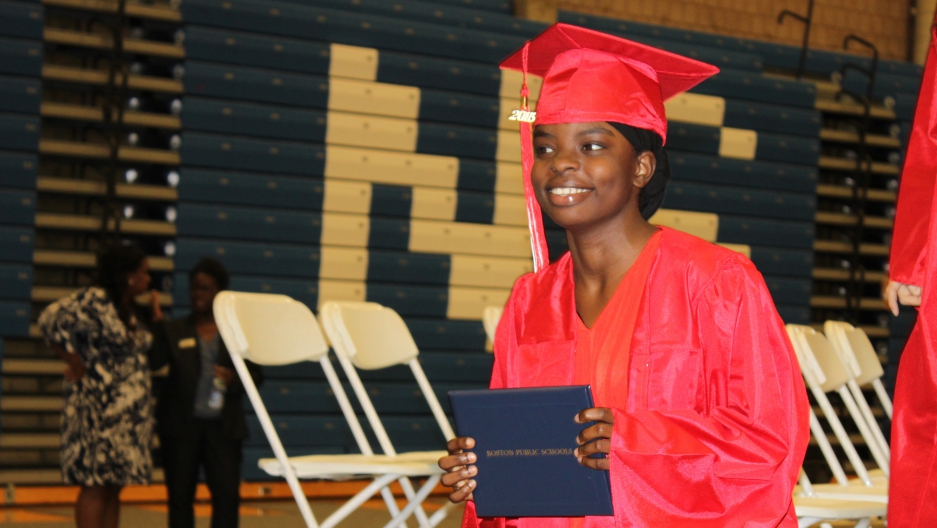 Fatuma Ibrahim at her high school graduation in August 2015

Fatuma Ibrahim doesn’t remember anything good about life in Kakuma Refugee Camp in Kenya. The 19-year-old was born there after her family fled the civil war in Somalia.

“I remember poverty, feeling really hungry and eating from the floor,” she told me when we met for the first time. “And going to school just for the food.”

She would hide the cookie she got for showing up at school under her shirt on the way home so the older kids wouldn’t steal it from her. Then she’d split it with her little sister.

“It tasted really good. When you don’t have any food, everything tastes good.”

Fatuma spent the first eight years of her life in the refugee camp. Then, in 2004, her family was resettled in the US.

Not surprisingly, her first memories of America also revolve around food.

"I remember eating chicken for the first time," she said. "I remember the feeling. I remember what it smelled like."

The family started out in an apartment in Lynn, Massachusetts, north of Boston. Her father found a job as a dishwasher. Fatuma and her siblings went to school. A couple years went by.

But then, for reasons Fatuma doesn’t entirely understand, her parents could no longer afford the rent. She remembers driving around in the car, going into offices, watching her parents sign papers.

They lived in a hotel for a while. Then they were sent to a shelter in Holyoke, in western Massachusetts. Each move meant a new school for Fatuma.

“It was kind of good because I didn’t have any friends,” she said. “I didn’t speak at all, so moving was just like a new start for me, every time. I was just looking for something: To not be shy, or to have some friends.”

After a few months in Holyoke, the family moved to a new shelter in Boston. Fatuma started middle school.

Saida Abdi got to know Fatuma and her family during this period. She is a social worker with the Refugee Trauma and Resilience Center at Boston Children’s Hospital and originally from Somalia herself. At the time she was running a group for Somali girls at Fatuma’s school. She could tell Fatuma was hurting.

“Imagine this family,” she said. “They came here looking for permanency, looking for safety. They find that they have a house, the kids are going to school, there is this sort of moment of hope, but then all that gets yanked away and now you’re being thrown from one city to another to another, four cities within a few months. That takes away the sense of safety and can become a trigger for all that has gone past.”

But there were other issues as well. Fatuma was starting to struggle with her identity.

The first decision Fatuma had to make at her new school was whether to dress “Somalian” or “American.” She agonized over whether to wear a skirt or pants, a headscarf or no headscarf.

She opted for a skirt and headscarf. That felt right at first. She was placed in a class with other kids from her particular Somali Bantu ethnic group. But then she tested out of that class, and into a hostile one.

"We don't do mental health"

The kinds of problems Fatuma was experiencing were familiar to Heidi Ellis, the director of the Refugee Trauma and Resilience Center at Boston Children’s Hospital.

She started working with refugees almost by accident, 15 years ago. She was an intern in psychiatry at Boston Medical Center. She started seeing a lot of Somali boys being referred for mental health evaluations because they were acting out in school.

When she started talking to them, she realized they had incredible trauma histories, both from the war back home and from the violent streets they were encountering here in Boston.

Ellis got curious. She secured some research funding, and started studying Somali youth. Two-thirds of the kids she interviewed had significant PTSD symptoms. And hardly any of them had sought or received any kind of mental health service.

Her colleague Saida Abdi understood why.

“When people are not of this culture they don’t understand the cultural context,” she told me.

“They expect you to come and talk, and that makes no sense in my culture. Why would I go and talk to someone who has no idea where I come from? We do religion and we do culture, but we don’t do mental health. We don’t say ‘depression.’”

Instead, Somali families went to community leaders. So Ellis and her colleagues started working with those leaders to create services that made more sense.

“We needed to hear from those community leaders what they thought we needed,” she said. “To bring them in as central partners to building the program, so at the end of the day they would want kids using the program.”

“We also realized we couldn’t start with the mental health problem,” Ellis continued. “We needed to start before that. We needed to start with skills building, and addressing what family and community leaders were pointing to as the real problem, which is that our kids are coming here and trying to acculturate to a whole new world and they need the skills to do it. That stress of what it means to be in a family of one culture and go to school in another is central to the problems that we’re seeing.”

Ellis found that the more trauma the kids had experienced, the more PTSD symptoms they showed. But she discovered something else startling. The discrimination the kids felt here in the US was as powerful a predictor of PTSD symptoms as their trauma history was.

“We couldn’t change the trauma, which for the most part they’d experienced before coming here,” she told me. “But the discrimination was happening in our own communities on a day-to-day basis. So we built into our program work with the schools around school climate and how could we make the kids feel like they were a genuine, valued part of our communities here.”

"I wanted to change into a new person"

By the time she reached high school, Fatuma was tired of feeling different. All she wanted was to fit in. So she decided to dress American, and start wearing pants to school.

“And my parents didn’t like that at all,” she said. “They were never OK with me dressing American. Whenever I came home I had to wear my scarf or whatever. I felt the pressure. And then I started hanging out with people ... different ... bad kids.”

At school, Fatuma started lying about who she was.

But it backfired. Lying made her miserable. She lost friends. One day a teacher asked if she was OK. She said no, that she hated life and wished she were dead. Fatuma was hospitalized with depression, the first of three hospitalizations during her high school years.

It was a terrible period, but also a fruitful one. Fatuma worked with counselors and mentors, and she reconnected with social worker Saida Abdi. Abdi worked with Fatuma, and also with Fatuma's parents.

Abdi says some of the most important work she does with families is simply explaining to parents that their child is in pain. And that battles over things like clothing can be counterproductive.

“It’s engaging in a fight that you will never win,” Abdi says. “It's symbolic of a bigger fight, because you're really fighting about, 'Is my child still in my culture, does my child still hold the same values as I hold?'”

Fatuma says she figured out a lot about herself in those years.

Gradually she learned to let the two sides of herself coexist. And her parents became more accepting of her need to be American as well as Somali. She stabilized. She finished high school late, but she finished, striding proudly across the stage to collect her diploma. Now she’s applying to college and figuring out her future.

“It's easier to figure out now, you know? Like it helps a lot to come this far. I've overcome a lot. I'm not going to say I'm not still going through it, but now I'm just like, I feel free. I'm at a good state in life and it's good to say that.”

It's good to hear it too.