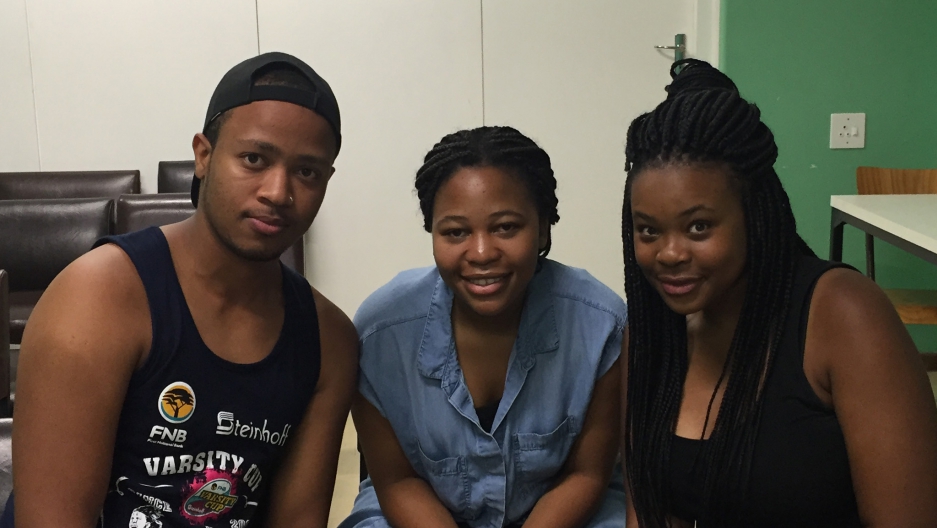 Protests about racial discrimination are spreading to campuses all over the United States. But I figured no one in South Africa was paying much attention. After all, the country has its own student protests to worry about.

And there’s been nothing in the South African newspapers or TV about what’s been happening at Mizzou, Yale, Amherst, Princeton and elsewhere.

Benamile Zwane has been paying attention. She’s a 20-year-old student at the University of Cape Town, and for more than a year, she’s been following the Twitter accounts of two Black Lives Matter activists in the US: Deray McKesson and Johnetta Elzie. When they started tweeting about Mizzou, it popped up in Zwane’s feed.

She says she was struck by the similarities to her own situation. “I was participating in and experiencing a student movement [here],” she says. “It was interesting to see another movement... that was campus-based, that was talking about an institutional culture of racism, also arise in a completely different part of the world.”

Benamile Zwane, a University of Cape Town student activist, has been closely following anti-racism protests on US campuses.

Since March, Zwane has been protesting the failure of South African universities to “decolonize.” She says even though her university has been open to black students since the fall of apartheid in the 1990s, the curriculum and the complexion of the faculty have barely changed. South Africa is 80 percent black, but according to government statistics, only 14 percent of senior university faculty across the country are black.

Zwane says it’s rare to see overt racism these days, though it happens. “You get called a slur or people will sing a song that is derogatory.”

But, just as in the US, Zwane says the bigger problem on her campus is “microagression” — the more subtle slights and jabs. She mentions, for example, not getting called on in a class. “The voices that are allowed to speak are white male voices and that happens a lot because our lecturers are predominantly white males.”

The university administration has been telling students to be patient, Zwane says. “The huge conversation here about race is ‘it’s only been 21 years since [the end of apartheid] ... so you can’t expect race to go away.’ ”

But the protests at the University of Missouri showed her the flaw in that line of thinking, she says, noting that it’s been more than 60 years since desegregation at Mizzou. And students there say they still experience racism.

“It highlighted why the sort of ‘it’s only 20 years, you shouldn’t be trying to find a nonracial community yet’ is so important,” says Zwane. “It validated the argument that maybe we should start now so [racism] doesn’t last however many more years.”

About a week ago, I sat down with a couple of other student activists in the lobby of their dorm to talk about the controversy at Princeton University in New Jersey. Students there have been demanding the removal of Woodrow Wilson’s name from campus buildings and institutes. President Wilson proposed the League of Nations, but he was also a vocal advocate for segregation and the Ku Klux Klan in the early 20th century.

Zanele Kabane, 20, says students on her own campus have been questioning the university's ties to historical figures as well. In April, students succeeded in getting a prominent statue of Cecil Rhodes removed. He's the 19th century British colonialist who was a main architect of racial segregation in South Africa.

“There’s a common thread,” Kabane says. “We can come from different places around the world and we can all have different stories, but being a student at university, our problems can be quite similar.”

Kabane’s friend, Nico Nomyayi, agrees.  “Students, specifically black students, are tired everywhere in the world,” he says. “We’ve taken so much, and it has come to this point where we’re tired and we want change.”

Nomyayi says at least now, university and government officials in both the US and South Africa are paying attention.