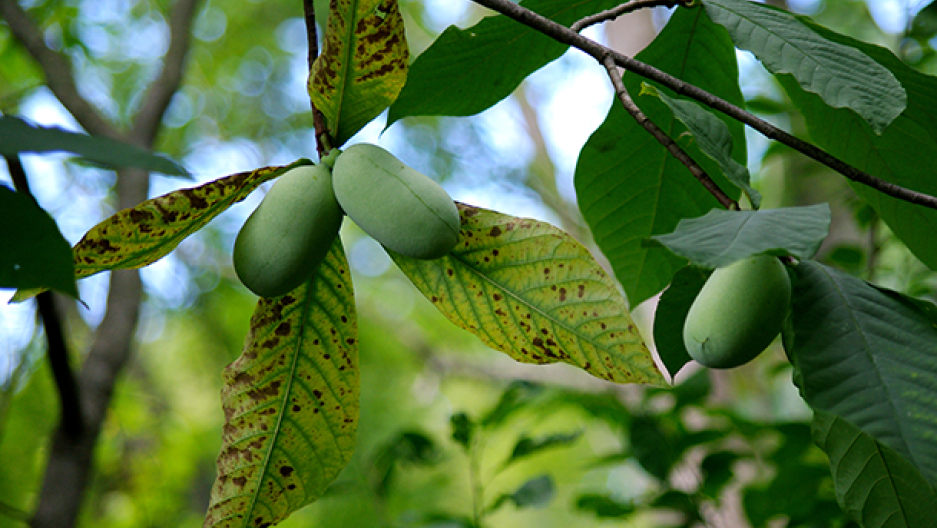 Pawpaws grow in clusters of one to six green fruit, which darken to a yellowish-black as they ripen.
Credit:

The pawpaw was once a cherished treat and a source of sustenance for many people in the eastern US. Chances are, though, you’ve never tasted one — which is a shame, because it is one of the most interesting fruits native to America.

“A lot of people commonly describe the pawpaw as a cross between a banana and a mango,” says Andrew Moore, the author of a new book, Pawpaw: In Search of America’s Forgotten Fruit. “It has an unusual tropical flavor for an otherwise temperate fruit, and it has a creamy texture similar to a banana.”

Moore became captivated by the pawpaw when he attended his first Ohio pawpaw festival. In the woods outside the festival fairgrounds was a patch of wild pawpaw trees.

“The experience of picking pawpaws from the trees, of picking them up from the ground — this wild bounty, this tropical tasting fruit that I had never heard of, that none of my family or most of my friends have never really heard of. I was fascinated that something this good and this large could be so unknown,” he says.

Moore calls the pawpaw a “river fruit.” It's native to 26 states in the eastern US and many of the rivers in these states are lined with pawpaw trees, which grow in the deep, alluvial soil on the banks. The pawpaw tree is as beautiful as its fruit, Moore says.

“It has this lovely pyramidal shape when grown in full sun and it has these long tropical-looking leaves,” he describes. “They are among the broadest and longest leaves you'll find in eastern forests, and in fall they turn a striking yellow.” 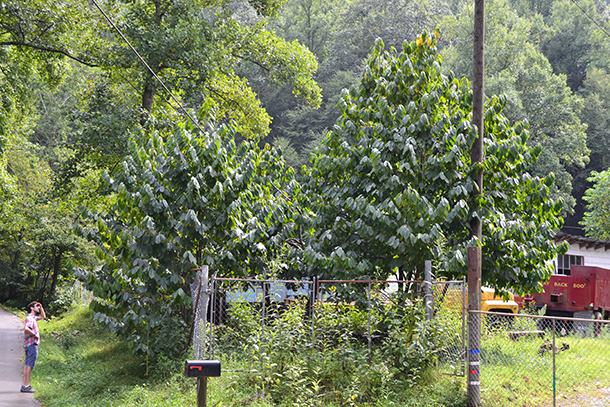 So, how did the pawpaw become America’s ‘forgotten fruit?’

“For the most part, we stopped knowing about pawpaws when we stopped going to the woods for food,” Moore explains. “In the middle of the last century, with the rise of supermarkets, global foods and industrialized foods, our diets became a lot more homogenized and something that you would have to go to the woods to gather was left by the wayside.”

The pawpaw's short shelf life and it's fragility also explain its absence from the nation’s grocery stores, Moore explains. It's not a fruit that lends itself well to traveling on the back of a truck, going to distribution centers and sitting on a supermarket shelf for several weeks.

“So it's just going to have a different niche,” Moore says. “It's maybe not going to be something that is found in every Walmart across the country, but it's more likely something that it will be found at farmer's markets and local food co-ops.”

As best as he can tell, Native Americans appreciated the pawpaw, and while little is known about how they ate it, there are some stories that survive about how the pawpaw was used, Moore says.

“The Iroquois are cited as having dried pawpaws and cooked them into corn cakes, which I found fascinating, because corn is low in niacin and pawpaw is high in this nutrient. It's also high in antioxidants — some of the same antioxidants that are found in red wine and chocolate,” Moore describes. “We also know that it is high in vitamins A and C and potassium. These old folkways, they develop for a reason, and there's a lot of wisdom in them.”

There were two prominent pawpaw festivals in the US when Moore began doing his research, but now there are festivals in Rhode Island, Maryland and New York and more are popping up. It’s a really fun time for pawpaw people, Moore says.

It’s also really fun to share pawpaws with people who haven't had them in decades, he adds.

“They remember, and they say, ‘Oh, I used to love eating these as kids. We'd go on the river and pick them,’” Moore says. “If they were coming home from school, this was candy for them. They didn't have access to all these sweet foods like we do today. It was such a cherished treat.”

“Everyone has these personal memories of gathering pawpaws, and some of that has to do with the fact that as children, they did wander and gather these, but they were also shown them by loved ones — grandparents, or parents. It was like a family tradition to go and gather these things.”