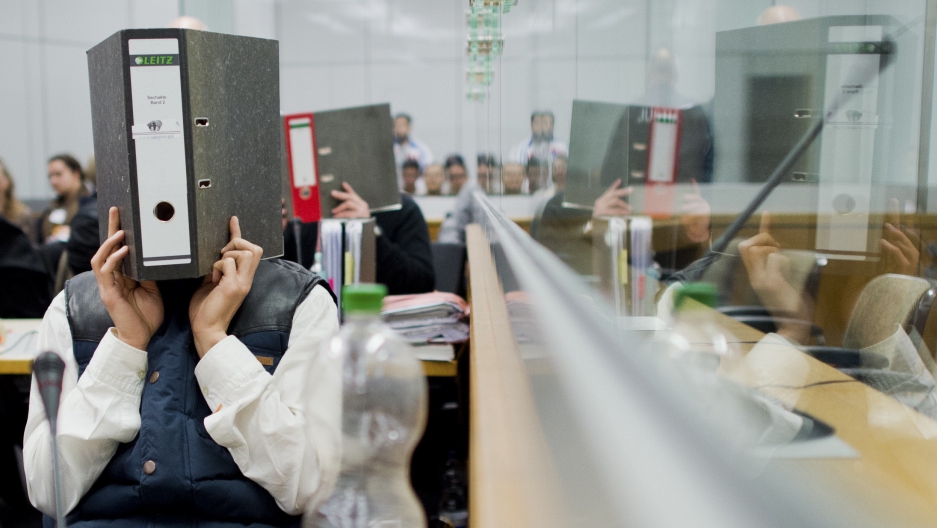 Defendants Ayoub B. (L) und Ebrahim Hadj B. (C) hide their faces as they wait for the start of their trial in a courtroom in Calle, Germany on Nov. 30, 2015. The suspected former Islamic State (IS) fighters are accused of being members of a terrorist group.
Credit: Julian Stratenschulte
Share

MUNICH, Germany — This European powerhouse became the latest country to boost its commitment to the fight against the Islamic State, after parliament approved a plan Friday to send reconnaissance jets and 1,200 troops to Syria.

Lawmakers voted 445 in favor to 146 against for what the media is calling Germany's increased noncombat role.

It came a day after British bombers began airstrikes against the terrorist group, marking a broader European effort to fight back against IS in the wake of last month’s deadly Paris attacks.

Some may be inclined to applaud the EU’s increasingly united front against terror. But it also raises a dilemma: Heightened military action in Syria will invite more attacks on Europe. At least that’s what many Europeans think.

Here in Germany, a poll by broadcaster ARD found that most citizens support their country’s new role in Syria, but 63 percent fear it will lead to terrorism at home.

Germans got a brief taste of potential danger last month when police evacuated an entire soccer stadium in Hanover. Security officials said there were very real threats of a coordinated attack.

Meanwhile, a senior European counterterrorism official told CNN on Thursday that IS may strike next in the United Kingdom. A wave of public opposition to the new British air campaign has included concerns that it will strengthen the terrorist group’s resolve.

The question of whether airstrikes against IS will increase or limit the threat of terror was the subject of a 10-hour debate in the UK's parliament this past week. Lawmakers eventually voted 397 to 223 in favor of the strikes.

"There is no doubt that the so-called Islamic state group ... poses a threat to our own people," Labour leader Jeremy Corbyn said. "The issue is now whether extending UK bombing from Iraq to Syria is likely to reduce, or increase, that threat in Britain — and whether it will counter, or spread, the terror campaign [IS] is waging across the Middle East."

Naturally, a lot depends on how effective European security and intelligence services are. But critics have recently blamed them for serious operational failures.

They also point to reluctance across the EU to share intelligence and coordinate security efforts, which could hamper efforts to prevent terrorism on European soil.

Worryingly, this is how the director of the EU’s police agency recently described his organization’s intelligence on European jihadists: “There is a black hole of information.”

While they’re targeting the source of terrorism abroad, European leaders still appear to have their work cut out on the home front.